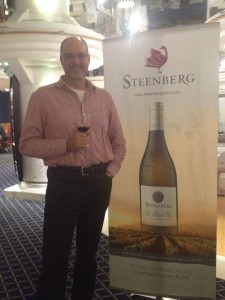 On Thursday evening I was invited by Communication Services Africa (CSA) to attend The Peninsula All-Suite Hotel monthly Wine & Dine at its Sunset Restaurant, paired with Steenberg Wines, both clients of the PR consultancy.  We had a fun evening, with a lot of banter from both the host Chris Godenir and Steenberg General Manager and Cellar Master John Loubser.

Chris Godenir has been at Three Cities for a number of years, and has a special relationship with his staff at The Peninsula All-Suite Hotel, not losing his cool easily.  One has to get used to his sense of humour, which he surrounds himself with continuously, making one unsure whether he says something in jest or is serious.   Poor John and I both were on the receiving end of Chris’ jibes, and I decided to take the positive out of his comments, which in my case showed that he reads my blog!

Chris announced that the Wine & Dine was the first opportunity for their new chef Hajierah Hamit to cook for a special group, the dinner being sold out. I sat next to Chris’ vivacious wife Alison, and she told me interesting stories about integration in the workplace, the challenge no longer between different cultural groups, but rather between age groups, quoting generation Y and X behaviours in the workplace, and how these can cause conflict.  She is a consultant smoothing over such age related conflict in the workplace.  At the media table too were Joanne and Patrick Gibson (Joanne writes for the Sunday Times Food Weekly about wine), Cayleigh Bright of Glamour Online and her friend Will, and Megan Drury from CSA. Chris introduced John, the most creative interpretation of a CV John has probably had to endure, but it raised many laughs, and John was  good sport in accepting Chris’ twist on his background!  John went to Bishops, was a commercial diver in Namibia where he met his interior designer wife Karen, worked at Môreson, then at Graham Beck as its Cellar Master, before moving across to Steenberg.  The diners were not told how good John is at making his own (private) Silverthorn MCCs, with grapes coming from their family farm in Robertson. John picked up Chris’ humour, and explained for those who did not know where Steenberg is that it is opposite Pollsmoor prison, which raised a laugh. He said that it is rare for him to come to the Atlantic Seaboard. He wanted to be sure that we understood that the Steenberg Brut 1682 Chardonnay had not been made in 1682, but that the farm had been established in that year, being the 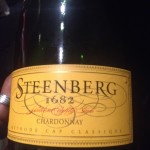 oldest in the country.  He shared that they used to make 2000 bottles of the MCC per year, and now they make 2000 bottles per week.  They are riddled by hand, and joked that Veuve Clicquot had been inspired by Steenberg’s yellow label design!  The MCC was served as the welcome drink. 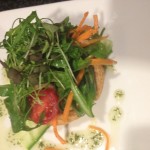 Our starter was a smoked salmon and spring onion tartlet, a petite rocket salad being served on top of the tart.  This was paired with Steenberg Rattlesnake Sauvignon Blanc 2013.  John told us the interesting background to the name of the wine, in that it was the name of one of the warships sent by the British to the Cape, to prevent a Dutch/French alliance from blocking the trade route between Europe and the East via the Cape for the British.  The names of the ships were HMS Rattlesnake, HMS Echo,  HMS Ruby, and more.   The battle site was Muizenberg beach, and the British achieved their goal of beating the Dutch, with 800 cannon shells having been fired in the one hour battle.  The suburb Retreat, which isn’t far from Muizenberg, was named after the retreat of the Dutch after the Battle of Muizenberg.  This is when the British took over the rule of the Cape.  The Sauvignon Blanc is barrel fermented, the Steenberg grapes benefiting from its cool climate, being so close to the sea. 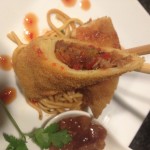 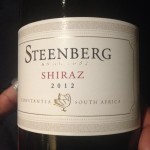 2012, which John described as having white and black pepper, as well as violet notes.  It was a good pairing with the duck. John’s story about Steenberg owner Catharina Ras was fascinating, and no one will forget the tale of the lady with the five husbands!  She arrived in the Cape from Lübeck, and was granted the Steenberg land, after she arrived in a sailing boat disguised as a man, given that it was a bad omen to have women on board.  Her first husband died tragically.  Husband number 2 survived being stabbed when he tried to intervene in a fight between their carriage driver and another, but then was eaten by a lion, which Catharina subsequently shot.  Husband number 3 was stabbed to death by a tribesman.  Husband number 4  went hippo hunting near Zeekoeivlei, and was trampled to death by an elephant.  Husband number 5 survived Catharina, who had 13 children.  Someone in the audience suggested that a Steenberg wine be named ‘Catharina’s Big Five‘! 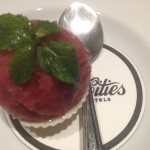 A cranberry and vodka sorbet was a palate cleanser, and a welcome break between the courses and wines. 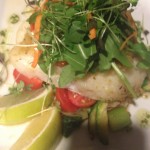 Interesting was that the herb-crusted kingklip stuffed with smoked mussels on a bed of wilted Asian greens was paired with Steenberg Echo Red Bland (Cabernet Sauvignon, Merlot, and Cabernet Franc), which was named one of the Top 6 SA Bordeaux-style Red Blends by Classic Wine earlier this year.  The kitchen very kindly prepared my fish without the mussels, on request, due to an allergy.  John said that the success with Echo had proven that Steenberg is not only a successful white wine producer.  The fish was topped with a tomato paste,  which was a pity as it detracted from the lovely taste of this fish, on top of which micro herbs were placed. 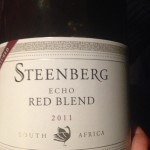 It may just have been my fish, perhaps to compensate for the mussels, as the fish dish I photographed at the start of the dinner did not appear to have any tomato paste on it.  Surprising was seeing Chris remove a large fishbone from his dish. 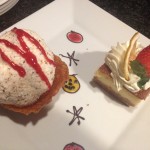 For dessert our menu told us that we would be served a petite key lime pie with roast coconut ice cream, but the word ‘petite’ was a misnomer, as it was a huge serving.  The coconut sprinkled ice cream was a big hit, but was such a huge scoopful that few could finish it and the lime pie.  The dessert was paired with Graham Beck Rhona Muscadel 2005, made from Muscat de Frontignan.

Whilst taking a photograph of John in Reception, he told me about the new craft beer which Steenberg winemaker JD Pretorius and Bistro Sixteen82 Chef Brad Ball are ‘cooking’ up, and for which a taste test was held on Friday.  It will be a stand alone Kitchen Bitch brand, an Indian Pale Ale, which will be served exclusively at Bistro Sixteen82.  It is an experimental craft beer, which will have new beers added over time.  It will be bottled in a 750 ml bottle similar to that of the Steenberg MCC.   John spoke about a Craft Beer revolution, and they may well become part of it over time.  We spoke about Steenberg’s poor reaction to Twitter and Facebook mentions, and John shared that Social Media activity for the brand will return in-house from July.

We had an enjoyable evening, with good company, very good wines, and very generous food portions served.  A nice touch was when Chris called all the staff from the kitchen into the restaurant, to thank them for their hard work in preparing our meal.  They were beaming, and all appear to love their job.  It was great to chat to John, not often having had the opportunity to do so in the past, and to meet the lovely new Wine Marketing Manager Caroline van Schalkwyk.  The Peninsula hosts Wine & Dine dinners on the last Thursday of every month.