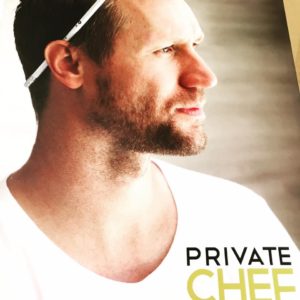 On Thursday evening I attended a four-course cooking demonstration by Private Chef Neill Anthony, at the very impressive very new Reddam House in Durbanville. He cooked from his recently launched cook book ‘Private Chef’.I was invited to attend the event by Barry Niewoudt, Head of the 700-plus learner Reddam 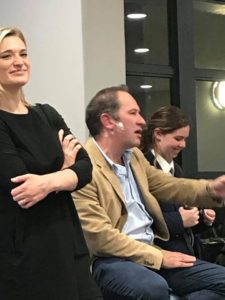 House Durbanville, and also a passionate restaurant consultant. He was incredibly funny at the event, a joke a minute. From talking to his teachers and watching the reaction of his learners, it is clear that he is highly regarded and loved. I was late in arriving, not having taken into account the traffic out of town on the N1 highway, even at 19h00. I then reached the Junior School building, guided by my Google Maps, and kind Barry sent one of his teachers to fetch me from where I had got stuck. Drama teacher Yvonne Anthony had 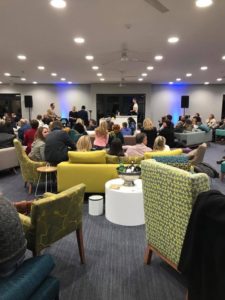 done the arrangements with me, and was the MC.

I was impressed by the size of the school building and its modernity in the entrance hall. I was guided to the upstairs venue, looking like a large lounge, with Chef Neill at the far end of the room. A large 10-seater table was filled per course in a  lucky draw, and I was lucky to be seated at the table for the third and main course, sitting with a mix of learners, parents, 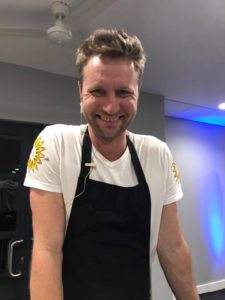 A booklet had been printed, with the four-course menu and the recipes for each of the four dishes. Dishes were amended relative to the cook book, due to the seasonality of some ingredients. Chef Neill explained the making of his dishes, and provided useful tips to the aspirant chefs in the venue, attended by about 180.

Course one was a Tea-smoked sea bass, served with pearl barley and herbed crème fraîche. I arrived too late to see this dish and to hear it discussed. The same applied to the second course, a ricotta gnudi (gnocchi-like dumplings made with ricotta cheese instead of with 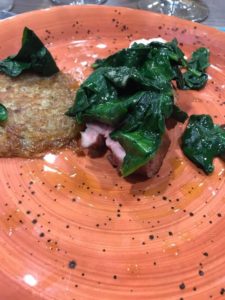 potato), served with aubergine, and baby gem lettuce. But I did get to try the salt-crusted lamb rump served with rösti, spinach, and raisin and caper purée, the asparagus in the recipe in the book having been excluded due to seasonality. Chef Neill said that the lamb had to be rested, for the same time as the cooking time, of about 13 minutes. The lamb was pink and super tender. This course was paired with a very good if still young Diemersdal Shiraz 2016, with flavours of spice, pepper, 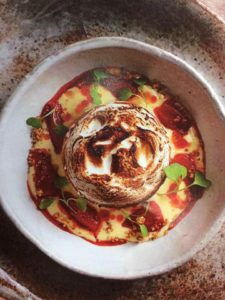 and blackcurrant. It was matured in French oak for twelve months. It is a full-bodied wine, ideal to serve with red meats.  The dessert was a steamed marshmallow, with custard and strawberries, which was paired with Diemersdal Noble Late Harvest 2016, available in 375ml bottles. It is only made in exceptional years, when the grapes get the botrytis fungus.

Chef Neill said that the recipes in the book are ‘100% original’, being his own creations.  He advised that one should pair Foods with ingredients which grow in close proximity, mentioning wild sorrel and mushrooms as an example. Chef Neill has an extensive set of tips in his book about the right type of mushrooms to pick, this ingredient to be taken seriously in being correctly identified as being edible. Chef Neill is available to cook for two up to twenty persons, and for any occasion. Yvonne described his service as bringing Gourmet restaurant food to one’s table at home.

Chef Neill travels and works internationally too, in the U.K. and Hong King, in addition to Johannesburg and Durban. Chef Neill has spent time in the London kitchens of Gordon Ramsay and Marcus Wareing. In the title page of the book, Chef Neill writes: ‘The day I stop cooking is the day I stop living‘. Chef Neill is a keen forager, in Pine forests in particular, and prefers to pick his ingredients himself. Often the proximity of ingredients in the forest leads to the creation of new recipes then and there, in the forest! The book has more than 200 pages, and at least 100 recipes, with beautiful photographs taken by Micky Hoyle. Unusual dishes and/or ingredients are quail, rabbit, veal sweetbread, bone marrow, beef cheek, pig trotters, duck, pig ears, goat’s cheese doughnuts, crayfish, octopus, brandade (an emulsion of salt cod and olive oil, usually eaten with bread or potatoes in winter), ceviche, quesadilla, hummus, Bavette (a beef flank steak), scallops, madeleines, clafoutis (baked dessert) with plums and blackberries, and a caramel soufflé. Chef Neill has a 13-part TV series ‘Private Chef’, broadcast in 98 countries on Food Network, as well as on local TV. I was invited to attend the launch of his show:

I was impressed with Reddam House Durbanville, and its fun and creative Head Barry, in what I saw at the school, but also in having created the event. Barry told me that they have a Kauai franchise in the school building, encouraging healthy eating. Barry consults to the City Grill Group, Burger & Lobster, The 41, and other restaurants.

Disclosure: I was gifted a copy of the ‘Private Chef’ book, which was signed by Chef Neill, and a bottle of Signal Gun Rosé.