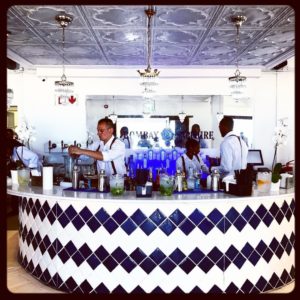 #    A new bar, light eatery, and dance club The Station on Bree has opened

#   Naturalis by Luke Dale-Roberts has not made it as an eatery nor wine bar, and now is a decor shop owned by Sandalene Dale-Roberts

#   Tiger’s Milk has opened in the SanClare Building in Claremont, in Century City, in Bryanston, and in Stellenbosch.

#   Jamie’s Italian is to open in Cape Town.

#   Dunkin’ Donuts will open 250 outlets in our country, the first outlet having opened at N1 City in Cape Town.

#   An interesting rumour is that Chefs Liam Tomlin and Ivor Jones are to jointly open a restaurant at The Silo hotel development in the V&A Waterfront. The Silo hotel is due to open in March, and will have the Rooftop Restaurant, Rooftop Champagne Bar, and The Silo Café as its offering. Chef Liam is consulting to The Silo.

#   Papa San, previously of Takumi, has opened his own restaurant Obi with Ben Bettendorf, on Long Street.

#   Chef Ivor Jones has teamed up with Chef Liam Tomlin, and has opened a second Chef’s Warehouse, at Beau Constantia wine estate.

#   The Grand Café and Beach has re-opened.

#   Baconville has opened in Willowbridge, a second restaurant by Richard Bosman.

#   Cabana will open in The Ritz

#   Black & Co will open in Constantia as a coffee and gift shop in January.

#   Pikant has opened at Uitkyk as a pop-up restaurant, operating until 29 January.

#   The Vine Bistro at Glenelly has opened, with Chef Christophe Dehosse.

#   El Burro has opened in Newlands

#   Baked on Long has opened

#   The Stepbrother has opened in De Waterkant.

#   The Classic Car Bar has opened in the V&A Waterfront.

#   La Colombe will open a new as yet unnamed restaurant in Le Quartier Français in August.

#   Hudsons in Claremont is closing down.

#   Bootlegger in Bantry Bay has closed down.

#   Searle’s in Greyton has stopped operating, and will only do catering for events.

#   Showroom in Stellenbosch has closed down.

#   Reuben’s Franschhoek will move to new premises, and its past space has become a Woolworths. It has closed for renovations, and reopens at its new location at 2 Daniel Hugo Street in March. It will operate as a pop-up restaurant at the Riffel-owned Racine at Chamonix.

#   Adam Whitehead of The Power & Glory has taken over the Rafiki space to create a new eatery.

#   Birds Café on Bree Street has undergone a transformation, and has reopened as Mink & Trout

#   Five Rooms at the Alphen Hotel has been transformed into a contemporary art gallery restaurant called blanko.

#   Orinoco has closed at its current premises on Bree Street, and reopens next year at an as yet unidentified location.

#   Le Grand has opened where the Hildebrandt used to operate in the Waterfront.

#   Hail Pizza has opened in the courtyard at Clarke’s on Bree Street.

#   Primal Eatery is opening where Charcoal Dining used to be on New Church Street.

#   Reuben’s Robertson is no longer operating at The Robertson Small Hotel. The hotel is now running its own restaurant.

#  Bootlegger has opened in Bakoven where Baked Bistro used to operate.

#   Chef Angelo Scirocco has left Urbanologi in Johannesburg as its Head Chef. He is said to be opening his own restaurant in Pretoria.

#   Chef Nick Oosthuizen from Swellendam iphas taken over the running of The Restaurant at Newton Johnson.

#   Isabella Immenkamp has left Hoghouse at Spier, and is at the Vine Bistro at Glenelly now.  Andre van der Merwe has taken over as Manager at HogHouse.

#   Martell Smit has left Leeu Estates, and is a Manager at Melissa’s.

#   Ian Smith will be the GM of the new Melissa’s owned Mantra Café, which opens in Camps Bay on 13 December.

#   Oskar Kotze has sold Sevruga, and his restaurants in Johanneburg, Pretoria, and Durban. He retains Beluga in Cape Town.

#   Chef Veronica Canha-Hibbert is the new Executive Chef at the Silo Hotel.

#   Chef Sheldon Raju is no longer with Chefs Warehouse nor is he involved with Chef Liam’s new Indian restaurant Thali.

#   Chef Chris Papayannes is the new Group Executive Chef at Devil’s Peak Brewing Company in Woodstock, and opening in Durbanville in March, and in Epping in July. The Head Chef at Chalk & Cork is Justin Zietsman.

#   Chef Annemarie Robertson has left Open Door and is freelancing in Johannesburg. The new Executive Chef is Evan Coosner.

#   Chef Guy Clark has been appointed as the Executive Chef at Tintswalo Atlantic.