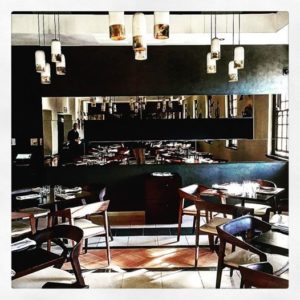 #    Villa 47 has opened on Bree Street, with Locanda restaurant on the ground floor.  Stuzzico Italian finger-food and bar has opened on the second floor. Cool contemporary The Restaurant at Villa 47 on the third floor has opened, with an Asian touch (photograph).

#   The Stack has re-opened as a restaurant and members’ club, after stunning renovations due to fire damage last year.

#   Melissa’s has opened in Franschhoek, and is to open in Camps Bay.

#   Tiger’s Milk has opened in the SanClare Building in Claremont, in Century City, and is opening in Stellenbosch, in Bryanston in Johannesburg in September, and in Dubai.

#   Baked Bistro has opened on Regent Road in Sea Point.

#   The Salt Yard restaurant has opened in Mowbray.

#   The Harbour House Group has taken over The Grand on the Beach, and has re-opened.

#   Villains Pub and Ale House is to open in October.

#   Baconville is to open in Willowbridge in November, a second restaurant by Richard Bosman.

#   Cabana will open in The Ritz in November

#   Black & Co will open in Constantia as a coffee and gift shop.

#   Pikant has opening at Uitkyk as a pop-up restaurant, operating until 29 January.

#   The restaurant at Glenelly has opened, with Chef Christophe de Hosse.

#   The Nunnery has closed on Bree Street. A new bar The Station will open.

#   Chef Conrad Gallagher appears to have closed down Café Chic and have left Cape Town!  He is reported to have opened a restaurant Gallagher’s on Stanley in Port Elizabeth, despite not having paid suppliers in Cap[e Town!

#   Baked Bistro Bakoven has closed down.

#   Orinoco on Bree Street has closed, said to be reopening elsewhere next year.

#   Reuben’s Franschhoek will move to new premises, and its past space is to become a Woolworths.  It has closed for renovations, and reopens at its new location at 2 Daniel Hugo Street in March 2017. It will operate as a pop-up restaurant at the Riffel-owned Racine at Chamonix.

#   Chef Liam Tomlin is on a major expansion spree. He is taking over and renovating the former Takumi space as an Indian tapas bar, on two floors, opening in about three months. His chef Sheldon Raju will head up Thali restaurant, and the project partner is Dimo Papa Christodoulou of Fat Cactus and Long Street Cafe. They will not take reservations.

#   The Creamery is to open in Claremont.

#   Birds Café on Bree Street has undergone a transformation, and reopened as Mink & Trout

#   Five Rooms at the Alphen Hotel has been transformed into a contemporary art gallery restaurant blanko.

#   Orinoco is closing at its current premises on Bree Street on 15 October, and reopens next year at an as yet unidentified location.

#   The Grand Camps Bay will open as La Parada at the beginning of November.

#   La Tête is to open where Orinoco operated on Bree Street.

#   Chefs Scott and Mel Shepherd have left Le Franschhoek hotel, and have moved to Café BonBon.

#   Chef Nick Oosthuizen from Swellendam is taking over the running of The Restaurant at Newton Johnson.

#   Isabella Immenkamp has left Hoghouse at Spier.  Andre van der Merwe has taken over as manager.

#   Martell Smit has left Leeu Estates, and is the Manager of the new Melissa’s in Franschhoek.