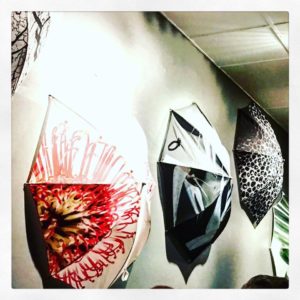 Two years ago I visited KZN on a food journey, for the first time looking to find the best restaurants in the province. At that time I visited 9th Avenue Bistro with two friends, and was disappointed with our dinner at a restaurant which once was Durban’s best. Revisiting the restaurant on Saturday was disappointing once again, as I experienced it to have slipped even further!

The restaurant is located facing the car park, at the back of a shopping centre, and the location is a major disadvantage. The restaurant is entered via a closed-off terrace area, which is a difficult  rectangular shape in which to place tables, leaving little space for patrons to walk through it to get into the main restaurant!  This was my review of the restaurant two years ago:

I sat down in the dark restaurant, and noted one change in its decor, the cheap-looking posters I wrote about after my last visit having been replaced with multi-colored umbrellas! This probably is the only positive change I found. I was seated by Manager Lee Jones, only identifiable in this role in that he wasn’t wearing a black top and black Glen Carlou branded apron! A wine list, artisanal beer and cocktail list, and menu were put on the table by a very brusque Bernine, who told me that she would be looking after my table, as if it was an instruction to me! There was no warmth or welcome. She wanted to proceed with the Specials before I had even opened the menu! After giving me some time to peruse the menu, her colleague Rianka came to my table to tell me about the Specials, and I asked her if she could please look after me. She asked Lee for permission, which was granted.

Reading the menu is a major challenge, as the restaurant is so dark. There is only a tiny Tea light in a candle holder, and the dimmer switch was set at near-dark, so much so that I had to hold up the menu to catch whatever light there was! Rianka had come prepared, and offered me her pocket torch, so that I could read the menu! Someone must have seen me struggle with the menu, and turned up the dimmer switch a notch, but it was still not light enough. I had originally asked to be able to photograph dishes at the pass, but noticed that there was no lighting there too. Rianka promised that she would light up each of the dishes with her torch!! I almost ‘platzed’ when she told me that they do not offer wifi in the restaurant! I do not know of a restaurant that does not offer wifi, reflecting that 9th Avenue Bistro is in the Dark Ages, both literally and figuratively. The A4 menu pages are in old-fashioned plastic pockets, a cheap look, making the menu even more difficult to read in the 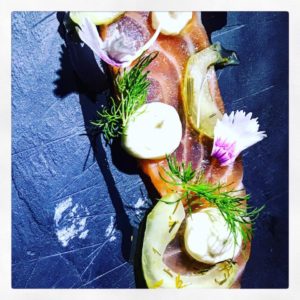 Once the order had been taken, Rianka brought an Amuse Bouche of gin-cured Norwegian salmon, with black onion crème fraîche, cucumber relish, and a potato blini, a minute portion on a slate plate, another Dark Ages moment, and unmemorable in taste! The starter portion costs R98. A bread basket was brought to the table, with olive and raisin ciabatta, commendably warmed up, but it was accompanied by two massive (750ml) unbranded bottles of olive oil and balsamic vinegar, a fourth Dark Ages moment for me. Rianka went to find out the brands, identified as olive oil from De Rustica, and the balsamic vinegar being Aceto Balsamico Modena. I declined the liquids, and requested butter, which did have a slight rancid taste. The table was covered with a tablecloth, and a material napkin was provided. Salt and pepper cellars were Dark Ages white Continental China ones!

The Dark Ages theme continued when I perused the menu, each main course having an old-fashioned 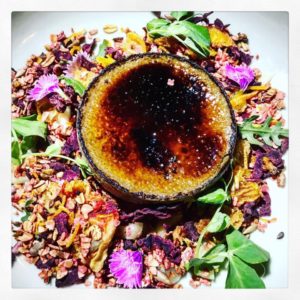 starch added, something one rarely sees in restaurants in this day and age. Each main course dish had mash, couscous, rice, or polenta, so I decided to order two starter dishes to get past this obstacle.

My first starter was duck liver crème brûlée, which was smooth and creamy, but it was surrounded with a most unusual bone-dry granola mix, with beetroot and orange, pickled apples  giving (far too much) texture to the dish, being completely dry. Rianka told me that added brioche croutons had been fried in duck fat. It had pea shoots as well as mini rocket as greenery, an odd combination. The bowl in which the dish was presented looked like a mass-produced one, with no attention paid to ceramic quality, as is the trend. A couple sitting next to me was unimpressed, expecting the créme brûlée crust 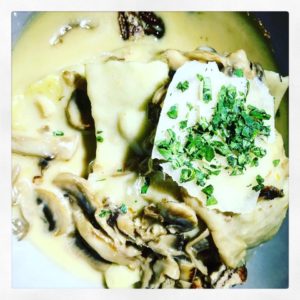 to be harder, and not as soft as this one was, and tasting pineapple rather than apple in their granola!

My second starter was a roasted butternut squash ravioli, with Parmesan, and mushrooms (R79), in a sauce which bordered on being too salty, even though it had much promise. It seemed that ordering two starters was most unusual.

For dessert I ordered a dry cappuccino, the coffee brand being Douwe Egberts the branded cup informed, again a brand from the past, and not a proudly KZN one such as Terbodore! I had ordered petit fours, and was told that 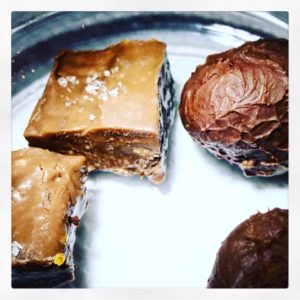 there were four different types, but in the end only two pieces each of a sticky wet toffee, and chocolate truffle, were served (R30). The plate on which the glass container had been placed was chipped, and the paper serviette placed between the plate and bowl was a cheap white supermarket one! Other desserts are blueberry cheese cake ice cream  (R69); vanilla bean crème brûlée (R65); baked pavlova (R59); pear, apple, and raisin bread pudding (R59); seasonal sorbets cost R55; a trio of mousses costs R69; affogato (R55); and a cheese board is offered at R75.

With the bill two pieces of biscotti, one already accompanying the cappuccino, were offered, so I asked for a little bag to take them home with me.

Rianka kept her cool throughout the meal, realizing that things were not running smoothly, little being her fault. She has been at the restaurant for almost a year, and it appeared that she had some information deficiencies. I was impressed with her eagerness to find information if she did not know an answer, rather than just saying anything. No prices of the Specials dishes were mentioned, and Rianka had to find information about these. I asked for water, and it was brought in a small water glass. A small carafe was found, to bring extra water to the table.

I was surprised that Lee largely ignored me, wanting to ask me how I was doing while I was eating the first starter, and then decided to return to lay cutlery for the second starter, stretching (his severely tattooed arm) right across me to put a fork on my left! He did return at the end of my meal, requesting feedback, and I was too stressed to feed back everything I had experienced to him. He walked me to the door, and waited with me until my Uber arrived.

Chefs Graham Neilson and Charlie Larkin were in the kitchen, visible from the table, but they never came to say hello. Chef Charlie is leaving 9th Avenue Bistro at the end of August. The Boiler Room, which has been run by Chef Graham, is to close down at the end of the month, Lee said.

Downright misleading is the introduction to the website: ‘9th Avenue Bistro has continued to remain at the forefront of the Durban dining scene since its inception in 2001, consistently winning awards and remaining ranked among the top restaurants in the country’!

In favor of the restaurant I must state that it was full on Saturday evening. I am unable to work out if this is because every other Durban restaurant is even worse than 9th Avenue Bistro, or whether Durban diners just are so undiscerning, in supporting a restaurant of such mediocrity and being so behind the times!