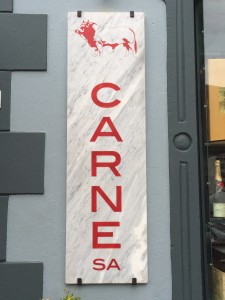 Serendipity led me to Carne Bistro on Kloof Street last night, bumping into the Friedman family, which was eating there while I was heading to Manna Epicure next door. An invitation to join their table led me to experience the new Carne Bistro, which opened in September. The space was previously Caffe Milano, which was a favourite for their Eggs Benedict, and for the excellent service from its previous manager Charlene, who now works at the main Carne on Keerom Street.

I had not been back to the original Carne restaurant, after the exposé on this Blog about owner Giorgio Nava’s misleading claims about his beef, lamb and game being organic and coming from his Karoo farm.  Nava saw the light, and removed the claims from his menus and website a year later.   The restaurant (with 95 Keerom) has never made the Eat Out Top 20 Restaurant shortlist since then, despite being one of two favourite chefs (with Chef Luke Dale-Roberts) of Eat Out editor Abigail Donnelly!  Nava wins a more recently created Eat Out 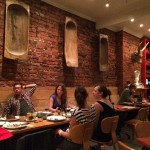 Best of Award every year, alternating between Best Italian for 95 Keerom, and Best Steakhouse for Carne. This yearshould be a 95 Keerom year!

Some interior changes were made to the restaurant, but not really visible nor obvious. Wall shelving has been removed, and the wooden buttermilk vessels which were used as decor at the Mozzarella Bar (sold by Nava a few months ago and now housing Chalk & Cheek, whose owners have taken over Nava’s arrogance and attitude!) decorate the walls.  The pine Alpine style chairs used for Caffe Milano have been retained, as have the tables and the cutlery.  Each table has a bottle of Morgenster extra virgin olive oil, and of Balsamic vinegar, as well as tiny bowls of coarse salt and pepper.   The menu printed on recycled A3 paper serves as the ‘placemat’ too. 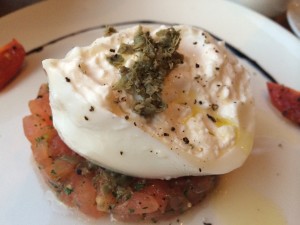 The Friedmans had already ordered starters for the table, an interesting salad combining avocado, rocket, pear, cherry tomatoes, pecan nuts, and blue cheese, drizzled with Morgenster extra virgin olive oil (R75).  They had also ordered a steak tartare starter, topped with a ball of mozzarella, and served with Melba toast.  Steak tartare was on the Caffe Milano lunch menu previously.  Other starters (‘Antipasti’) are beef carpaccio, seared beef salad, pan-fried sweetbreads, Caprese salad, and a terrine of aubergine, tomato and baby marrow, all ranging in price from R75 – R85.

We had been sitting at a table closest to the pavement, and a sudden gust of wind threw over Jonny’s glass of red wine, which mainly landed on my shirt and on the table, mopped up quickly by our friendly waiter. Almost as if a ghost, there stood Nava, just as we moved to a less windy table closer to the restaurant interior.  If Nava had wanted to say anything to me (our last interaction almost a year ago was anything but professional from his side) he must have swallowed his words, when he saw who was at the table, Jonny having just concluded a deal with Nava!

Don’t expect to see the platter of meat cuts, as is done at the main Carne.  For our main course Jonny’s son had ordered a burger (served with cos lettuce, onions, tomato, and Emmentaler cheese, at R90), Katie 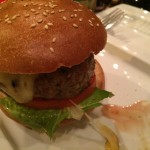 ordered a burger without the buns, and Johnny had the salad of pan-fried free-range chicken breast, with 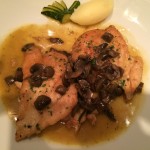 lettuce, cherry tomatoes, baby corn, Emmentaler cheese, and drizzled with Morgenster olive oil (R85).  My choice was chicken breast baked with white wine and mushrooms (R110).  We were offered a choice of sides of chips, salad, and spinach, and it was not clear if these dishes are included in the main course, or are charged, listed on the menu as extras, ranging in price from R25 – R30, and sauces at R20.   The ‘Primi’ dishes offered are ravioli of slow-baked lamb shoulder, penne with slow-cooked tomato sauce, butternut ravioli with ricotta, and polenta gnocchi, costing around R80.   The ‘Dalla Griglia‘ (Grill) section offers T-bone steak (R400 for two); free-range Karoo lamb loin (nice honest description) at R220; hanger steak, flat iron steak, spider steak, and pork sirloin range from R140 to R180.  No game is offered at Carne Bistro.

For Dolci we shared a most heavenly creamy Tiramisu (R55), ‘a combination of everything rich and delicious with a dash of black 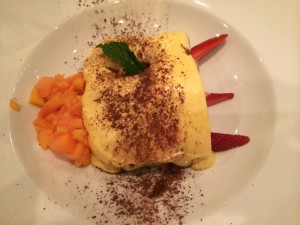 One wonders why Nava would be creating a chain of three Carne steakhouses (a Wynberg one is to follow), stretching him in being at all his restaurants all the time.  He closes Carne Bistro on Sundays, so that he has at least one day off.  He is renowned (to his staff in particular) for popping in unannounced, and this may have been the reason for selling the Mozarella Bar.  The waiter we had was good, very confident, and willing to please.  We were impressed about how full the restaurant was last night, being a Monday.  Carne Bistro is a reduced version of the main Carne restaurant on Keerom Street, its menu containing far fewer items than does that of the main Carne.  It also reflects dishes that Nava had on his menus at Mozzarella Bar and Caffe Milano.  Plating is unexciting and, other than the Tiramisu, so is the food.

Interesting will be to see how two meat-dominant restaurants (Carne Bistro and its neighbour Manna Epicure, serving Argentinian style steaks in the main) will do on Kloof Street in the long-run.  Commendable is the good service (but no manager was visible), and Nava’s handling of our presence at Carne Bistro last night!  Grazie!