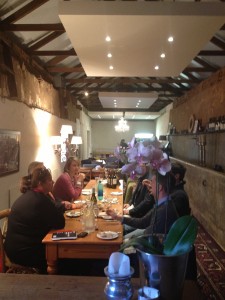 Last week TV producer Anne Myers and I drove all the way out to the Durbanville Wine Route to try out Chef Nic van Wyk’s Diemersdal Farm Eatery, which I had seen in preparation, prior to its opening, at the Season of Sauvignon Festival in October.  Chef Nic’s menu is a good ‘pairing’ with his role as one of the two judges in the new Afrikaans reality cooking programme Kokkedoor on KykNET, which is focused on nostalgia food.

Diemersdal is one of the oldest wine estates in Cape Town, established in 1698, and six generations of the Louw family have lived on the farm since 1885.  Their wines are highly rated.  What is commendable is that the wine prices in the restaurant are the same as the cellar door prices charged in the Tasting Room across the ‘werf’.  Tienie Louw is still in charge, but has handed over the winemaking to his son Thys.

Getting to Diemersdal is easy, but I was unsure of the route, having only been there once before.  Getting through on the phone line, which is shared for the restaurant and the tasting room, was difficult as 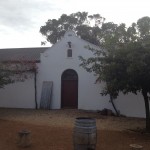 the phone line was engaged regularly.  Once I got through, a  very friendly assistant in the Tasting Room gave clear directions, which the restaurant may consider sharing on the website.

The menu changes daily, and has a Tapas option, as well as a two/three course option, which changes daily, Chef Nic said, influenced by what is in the fridge, in the vegetable garden, and what his team feel like preparing. The menu is only posted a day or so ahead, so one must check if one likes what is on the menu for that day, as no options are offered.  Luckily for us we were happy with the menu, Anne choosing the Tapas platter with six savoury dishes for R120, and I had the three course lunch for R150, both of us sharing each other’s dishes. 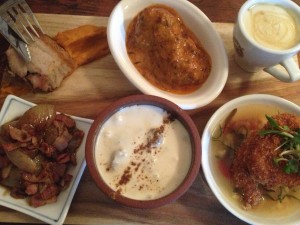 Of Anne’s Tapas dishes, I especially enjoyed the pulled lamb shoulder served with a white bean sauce (front middle).  She also had a prawn and tomato consommé, roasted pork belly and carrot purée (a reduced version of my main course), braised pearl onion and bacon ragout, veal meatballs in a smoked tomato and tarragon sauce, and a most unusual creamed parsnip and fynbos honey soup! 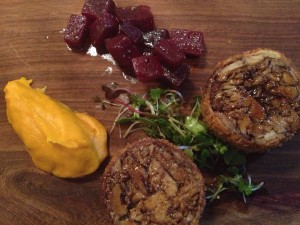 My starter was a crumbed chicken ballotine, with an exceptional crispy outer band, served with carrot purée, and smoked beetroot.  My main course was a very tender pork belly served with a prawn and chickpea fricassée.  We were talking so much that I forgot to ask Chef Nic to replace the 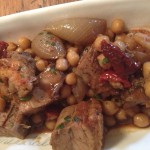 chickpeas with something else, not being to my liking.

My dessert was a vanilla roasted guava cheesecake served with guava mousse, the strong guava fragrance reminding me of how 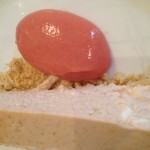 much I love this winter fruit.  The dry cappuccino was perfectly prepared. Anne’s dessert as part of her Tapas platter was a delicious Champagne mousse served with cranberry sauce and hazelnut biscuits.  Chef Nic recently did an ‘Onthoukos’ evening with Hetta, and both cooked courses for the dinner.  He will be cooking with Dinner Diva winner and Eat Out Blogger of the Year Anel Potgieter on 13 June, each preparing three courses.

Anne has seen a number of the Kokkedoor episodes, and having produced a number of food-related reality food shows for SABC 2, Dinner Divas having been the most recent one, she shared her feedback with Chef Nic, feeling strongly that he and his co-judge Pierneef à La Motte Director of Cuisine and food historian, Hetta van Deventer-Terblanche, do not receive enough exposure in the Kokkedoor episodes.  The programme series was conceptualised by Errieda du Toit, whose PR company also handles the Social Media for Kokkedoor, was filmed in Prince Albert, and is produced by Homebrew Films for KykNet.  Chef Nic said that it was a new experience for him, and that he learnt a lot through it, the production being run by ‘pros‘, he said.  Many of the contestant profiles were shot at Diemersdal, and that has been good for business, he said. KykNet is 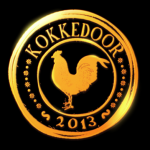 happy with the success of the programme, and a season 2 is very likely.  We questioned the involvement of MasterChef SA Finalist Sarel Loots in Kokkedoor, which gave him a huge awareness advantage over all the other participants, but he and his team mate have already been eliminated.  Anne felt that radio and TV presenter Mariëtta Kruger’s involvement as the presenter may have been a mistake, as she is not so well-known any more, and that she was a little stiff.  She also felt that not enough food is shown in Kokkedoor, which is what viewers of food reality TV programmes want to see.  She advised that there was no viewer ‘take away‘, in that there is no summation about why certain contestants’ dishes are the best, and why those that did not do well failed in their food preparation. Anne added that daytime viewership on weekends is more successful for food reality programmes than weekday evenings. 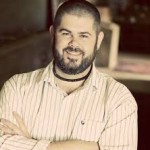 Chef Nic uses a vegetable garden on Diemersdal, which belongs to the Louw family, and there are pigs and chickens too.  His menu focuses on ‘fresh and seasonal’ foods, expressing disappointment on how few chefs follow this policy. His menu always has fresh vegetables from the garden on it.  He and his kitchen team ‘play‘ with food ideas, to come up with new dishes, and leftovers are worked into new dishes.  Nic has been a chef for 13 years, having studied at the Institute of Culinary Arts (ICA) in Stellenbosch, and starting with Chef Franck Dangereux at La Colombe, before he and Chef Michael Broughton opened Eat Out Top 10 restaurant Terroir at Kleine Zalze.  He opened Diemersdal Farm Eatery earlier this year, and had to spend five weeks in Prince Albert for the filming of Kokkedoor, leaving his new restaurant in the capable hands of his sous chef Martin de Kock.  Nic calls his food ‘Kontreikos’, translated as regional food.

The decor was done by Juanita Louw, wife of Tienie, and the character of the long narrow horse stable building dating back to 1929 has been retained, with raw brickwork, and a high ceiling, yet with modern touches for the ceiling lighting to which has been added interesting lamps on one side.  A reception desk at the entrance door breaks the room into two parts, allowing lots of space between tables.  Wooden tables with rustic chairs fill the room, and each table had an unusual candle holder, being an upturned crystal glass on top of another.  Chef Nic says that Juanita has decorated the restaurant as she would her own home.

Only Diemersdal wines are offered at the Eatery, the exception being the MCCs, which Diemersdal does not make.  They offer Krone at R140 and De Grendel at R165. White wines start at an unbelievable R20 per glass for the Sauvignon Blanc 2013 and Chardonnay Unwooded 2013.  The MM Louw Estate Sauvignon Blanc 2012 tops the price list at R165. Red wine by the glass is even more affordable, starting at R15 for Matys Red 2011, with Pinotage 2012 costing R25 and Private Collection 2011 R40 per glass.

Chef Nic took lots of trouble in chatting to us, and requested feedback after each course, saying that if he is not told things, he cannot fix them.  Anne and I felt that Chef Nic’s food is ‘honest food’, putting who he is on a plate, which is done with love, without trying to impress others, as so many chefs tend to do.  We loved our experience at Diemersdal, its good food, and the very special service by perfectly bilingual Guenola, speaking Afrikaans to Anne and English to me.  The music was too ‘rock’ and loud for us, and did not match the country setting of the restaurant. Cleaning the tables around us with a strong detergent was one of few 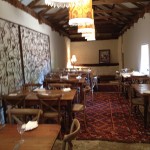 negatives.  The menu is not updated regularly, it being out of date in still showing last week’s menus on the website.  The Diemersdal Farm Eatery is well worth a visit, being good well-priced honest food prepared with love.