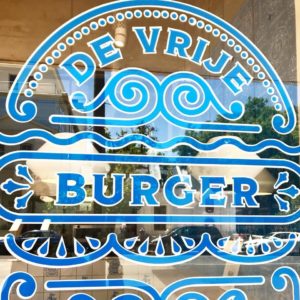 Ever since I reviewed Chef Bertus Basson’s Spek & Bone dive of a restaurant in Stellenbosch in July last year, Basson has been on a mission to discredit me as a reviewer, not being man-enough to accept my honest feedback. Last week I popped in at his latest eatery, De Vrije Burger, a hamburger and ice cream joint, on Plein Street in Stellenbosch, the take-away outlet being far below the standard of his Eat Out Top 10 award stature! One wonders why he is scraping the barrel with cheap and nasty restaurants, when he started off with the top level Top 10 Overture restaurant, his first! Each new restaurant, of his five restaurants, is one level below the previously opened one in terms of quality!

Basson rudely created a scene about my Spek & Bone Review, calling for a ban of me eating at 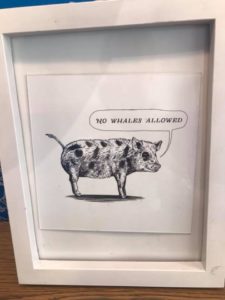 restaurants, through a dare-I-say crappy drawing of his pet pig Spek with a speech bubble ‘No whales allowed’, which he tried to peddle to other restaurants at the cost of R100! It appears sales were poor, the notice only seen at his restaurants, and one Kloof Street Cape Town establishment! The readership of my Spek & Bone Restaurant Review was an all-time record!

I entered the ‘restaurant’, walking past it in Stellenbosch by chance, not being able to resist the temptation! I asked the lady who took my order what the sign meant, and she 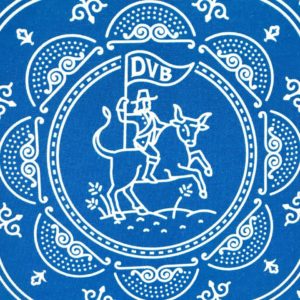 told me that she had no idea!

There is only one table in the take-away space, hardly a restaurant, at the entrance, the idea clearly being that one buys the hamburger and ice cream as a take-away. One orders at a counter, and 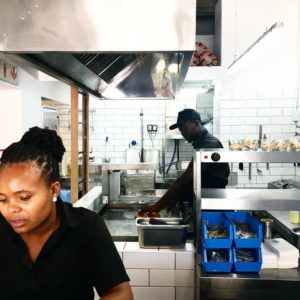 pays, the order then being shouted to the Griller standing just behind the order lady! I liked the wallpaper on one side, even though the branding is not spelt out, being an abbreviation!

A board informs that one can order one (messy-looking) hamburger only, at a cost of R75, with the following basic ingredients: brioche bun, a massive 200 gram free- 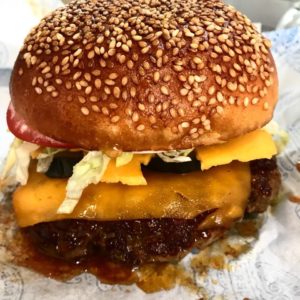 range beef patty, two slices of cheddar cheese, mayo on top of the bottom bun half, chopped lettuce, two slices of pickled cucumber, and a slice of tomato. I had the red onions excluded. Everything about the burger was good, except the very burnt bottom bun half, which was inedible!  A number of add-on options are available, including smoked chili sauce (R7,50), Melrose cheese and biltong (R15), and bacon (R12,50). Hand-cut potato ‘tjips’ cost R30, pricy, with additional add-ons of BBQ spice dusted (R15), ‘Cheesy’ (R12,50), and Peri-Peri (R10). Six spiced onion fritters cost R27,50, and an additional  ‘uitpakslaai’ traditional South African salad ‘rabbit food’ with creamy dressing costs another R35, easily making this meal cost a pricy R140 if one orders the burger with chips and a salad, excluding any other extras!

One receives a voucher card, for a ‘draai roomys’ ice-cream cone topped with hundreds 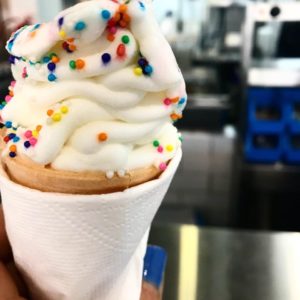 and thousands, included in the price, a short cone with a twirly-whirly thin and poor quality ice cream! If one buys it separately, one pays R5 for it, reflecting what poor quality it is! The gauze napkin was a good quality thick one.

The payment is strictly by credit card, cash being rejected as a payment method, perhaps reflecting a distrust by Basson of his staff. The credit card payment is via YoCo, with no credit card slip being available!

When I posted the wallpaper photograph on Instagram, it received an angry reply from Basson, reflecting once again his bullying male chauv side!

A tourist would regard De Vrije Burger as just another Burger joint, with no branding inside the outlet. There is no link to Chef Bertus Basson at all, or to his four other restaurants! Nothing about this take-away joint is ‘vrij’ at all, as its name implies! One wonders what Basson is thinking, each new restaurant opening being of a lesser quality than the previous one! Restauranting is not about the quantity of establishments, it is about their quality! Basson now is our country’s largest restaurant chef-owner, with five restaurants, hardly an accolade, with three of these being of poor quality! Four of Basson’s restaurants are based in Stellenbosch, an overkill!

POSTSCRIPT 4/1: Basson went on the attack about my visit to De Vrije Burger on Instagram and Facebook last night, before I even posted my Review…. lol. Truly a compliment!