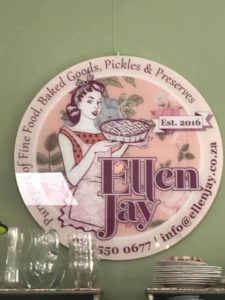 The new restaurant with a mouthful of a name to open at Constantia Fabrics, Ellen Jay Purveyors of Fine Food, Baked Goods, Pickles & Preserves, is a new Eatery operated by seasoned restaurateurs Len Straw and Johan de Villiers, operating within Constantia Fabrics.  It adds a new touch of class to food offerings in the Constantia area, which I visited for the first time on Saturday 8 December.

I have known Johan and Len from eating at their La Petite Tarte Eatery in De Waterkant over the years, but was surprised when Googling them, that they have written books too, a cookbook ‘Once upon a Chicken Pie and other Food Tales’, as well as DIY decorating books too. They went under the radar in the past year or two, until I heard from my friend Saleh Abrahams that they were opening up inside his Constantia Fabrics outlet. Previously this space had been occupied by Black & Co.

The wall colouring is pink, with the Ellen Jay branding over the coffee station and food preparation area. The menu is colourful, A5 in size with a ribbon, and the menu items listed in good old-fashioned handwriting. Fabric from Constantia Fabrics was used for the upholstery and cushions for 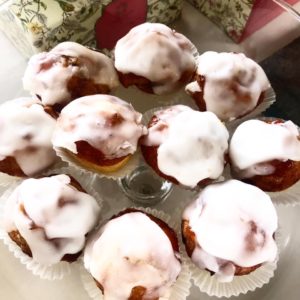 the chairs, blending in with the ready-made cushions of Constantia Fabrics, making the fabric store less visible. There are shelves jam-packed (pardon the pun) with jams and preserves, sweet and savoury, which Johan makes himself, under the Ellen Jay brand name.

On a central table a large vase of fresh flowers dominates. It has a selection of their baked treats, 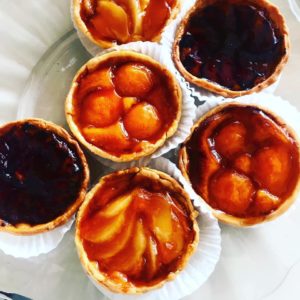 which included a Carrot and Walnut cake (R45), Small Frangipani tartlets (R20), a selection of beautiful looking fruit tartlets (R42), Baked cheese cake with a berry coulis (R45), and Lemon drizzle cupcakes (R30). I ordered a slice of the Carrot and Walnut cake, a very petite one served, and a Frangipani tartlet to take away, the latter especially delicious. I was delighted to see Wendy there, whom I met via Salhe, and with whom I 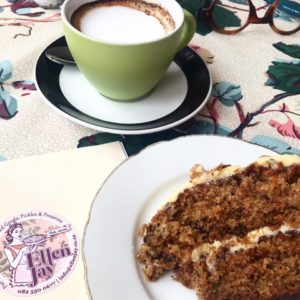 have done some Spiritual work. PR consultant Ann Wallis-Brown was also at Ellen Jay, with friends from France.

From the menu, as well as a blackboard at the central table, further savoury offerings can be ordered, including quiches (tomato, onion, and cheese; smoked salmon and dill) at R65/R75, respectively;  and a variety of pies (spinach, feta, and dill in phyllo pastry; mushroom, caramelised onion and thyme; and pot roast chicken and vegetables), at R 75/70/85; and Beef Bobotie with yellow rice, samba, and chutney, at R85.

It was cosily busy on Saturday morning, but both Wendy and Johan told me how busy it is over lunchtimes on weekdays, and that it has become necessary to book a table. Ellen Jay is hands-on run by Len and Johan, such a refreshing change to see owners on the floor, interacting with their patrons, even taking the payment, and creating a lovely take-away ‘gift’ of the Frangipani tartlet in a see-through packet and closed with a red ribbon. It will be a definite stop on any journey down south for me in future.