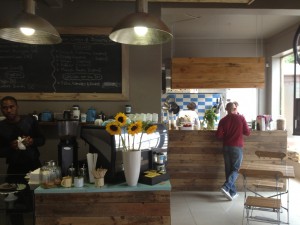 The space that once was Gesellig on Sea Point’s Regent Road had been standing unused for a couple of months.  Now it is the home of Flatteur Café, a ‘specialty coffee shop’, according to its co-owner John du Preez, and is worthy of its name, meaning flattery in French, or so I thought on my first visit.  Unfortunately the second visit a few days later was disappointing.

John told me that they do not want to become a restaurant but that they want to focus on being a good coffee shop. They use Origin coffee and its Nigiro teas, and I enjoyed a perfectly made dry cappuccino (R20), even though they only have ‘Flat White‘ on their coffee list, yet they were happy to oblige.  The menu is short and sweet, and will change every two to three weeks. They offer a number of different coffee styles, two or three cakes daily, baked by John’s Polish partner Rafal Glenc, as well as muffins (R12), scones with jam and cream (two for R20), Danish custard slices, and a range of unusual sounding biscuits, including ginger, coconut and sultans, butternut, as well as muesli rusks.

Breakfast is served all day, a choice of scrambled 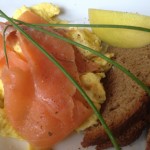 eggs served with salmon and rye bread, a steal at R45, or served with mushrooms (R35); muesli, honey and yoghurt (R25); and French Toast served savory with Brie and tomato jam, or sweet, 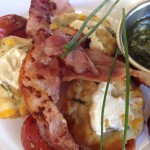 with fresh fruit and mascarpone.  On Friday I enjoyed the corn fritters with bacon and cherry tomatoes (R45).  Sandwiches are available too, on a choice of rye bread, ciabatta, and toasted croissant and cost between R45 – R55, including steak and parmesan, poached chicken breast marinated with red peppers and tapenade, and mushroom served with salsa verde and Dijon mustard.  Salads cost R45, and are a grilled Caprese, Lentil salad, and a warm winter salad with roast vegetables and couscous. A Special of the day on both days was a Feta, tomato and rocket omelette (R35).  Chef Catherine is friendly, having moved to the city after selling her Bamboo Beach restaurant in Sandbaai, outside Hermanus.  All the staff smiled, and were welcoming on the first visit.

John and Rafal lived in London for twenty years. It was John who wanted to return to his home country (he grew up in Mossel Bay), and they chose Sea Point to set up their new business, not ever having run such a business before. Rafal is a passionate baker, baking the French chocolate cake (R30), Lemon Meringue (R28), and Cappucino Cake (R40), the latter being so popular that it is sold out on most days.  They did not know predecessor 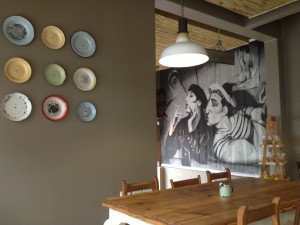 Gesellig, and have smartened up the interior, with a reed ceiling, finished off the deck onto the Church Street pavement, added new wood dominant furniture on the upper level, used ‘blikborde’ decoratively on one of the walls, used wood cladding on the kitchen counter, and created a new cake and coffee counter. A large poster gives a French feel, as does the French café music.  Each table has a ‘blikbeker’ holding the sugar sticks, to continue the theme. Cutlery is by Fortis.  Books are displayed on the steps of the spiral staircase.

Flatteur Café is a friendly homely coffee shop serving excellent food at very reasonable prices.  I wrote all the above (other than the menu details) after my first visit.  When I went back on Friday it was as if the personality of Flatteur Café had changed completely. From friendly and welcoming on my first visit it was as if they did not care, with no menu brought to the table, nor order taken.  The friendly chef also wasn’t on duty, and I was horrified to see her assistant spraying a pan with what seemed half a canful of Spray & Cook. John seemed completely disinterested, working on his laptop, not checking on his two tables with customers, while the barista/waiter had his back to the coffee shop and was sharing photographs on his phone with the assistant cook, and ignoring his customers too.  I had asked John 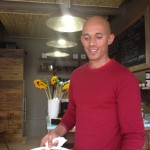 for the menu to be e-mailed, to save me writing it all down, but it never arrived, despite a follow up call.  A lovely fellow guest Jadee, who follows the Restaurant Specials on our blog, was on her first visit on Friday, but had arrived earlier. She fed back that a strange atmosphere was tangible whilst the chef had been there earlier in the morning.  It is disconcerting that Flatteur Café could have such a personality change in its first two weeks of operation.

Flatteur Café has fantastic potential, especially in Sea Point, which is short of quality restaurants and coffee shops.  One hopes that John will come out of his shell, and connect with his customers more, to make them feel welcome when they support his establishment.  Rafal and Chef Catherine add value with their special food, and the interior is attractive. Parking in the area is scarce.

POSTSCRIPT 14/6: I returned earlier this week for delicious scones, and was delighted to meet the other partner Rafal, charming, friendly, and attentive. Sadly, John ignored me completely, appearing hurt by our review above.  John and Rafal are now running their own kitchen, having let the kitchen staff go.

6 replies on “Restaurant Review: Flatteur Café in Sea Point worth flattery… or is it?!”