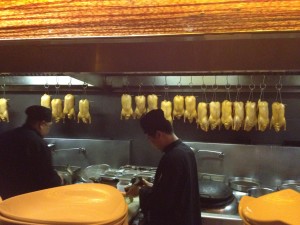 Not having been to Haiku in three years, and attending a concert close by in the Old Town House two weeks ago, I booked a table at what was once my favourite restaurant. While its prices have settled, service remains a problem, unforgivable after being in business for seven years already.  Food presentation was most disappointing, and the food quality has declined.

It is seven years ago that Haiku opened to hype and fanfare.  It was the bees knees of restaurants, becoming cult almost immediately, helped along by the difficulty in getting a table.   It won Eat Out Best New Restaurant six months after opening, a category never awarded since.  Those days are long past, the arrogant waitrons losing business for the restaurant, with patrons going elsewhere to get their Asian food fix.  It was easy to book the table for a Saturday night, yet when I returned from the concert the restaurant was almost full.  The loud disco-style music does not match the Asian theme of the restaurant nor makes it easy for one to communicate at the table and with the waitrons, and one wonders why they need to put up the volume.  I remember this as a past irritation, introduced more recently.  I was interested to know how the opening of the V&A Waterfront branch a few months ago had affected business in the original branch, and perhaps predictably the waitress said it had not at all.   The manager told me later that their best chefs and waitrons had been transferred to the Waterfront, so it would be worth trying this branch too. The standard of the staff was evidenced by two incidents of clanging glasses, falling on the floor and breaking, for all to hear!

I was shown my table by the hostess, booked as a table for one, only to be asked in a most irritating manner by the waiter if I was on my own.  He then wanted to clear the table of superfluous dishes, rather than bring the menu.  He is one of the arrogant waiters still there.  He did not bring a winelist, maybe because I had asked for a glass of water when I sat down! He was replaced by a waitress who said that she has been there for five years, less arrogant, but clearly disinterested in her job.   Chopsticks are cheap, the wrapper Haiku branded, compared to the fantastic quality black ones they had when they first opened.   They must have lost a lot of those to have switched to the cheap-and-nasties. A smeared  container with super hot chilli, and roasted tomato mild chilli was on the table already, obviously left there for all users of the table to dip into throughout the evening, not particularly hygienic, one would think. Each table has a light over it, while the restaurant overall comes across as dark. The star system is still in place, and I was surprised to see that the prices have barely increased, going up from R40 in 2010 (having started at R42 when they opened) to R45 per star currently, a 12,5% increase over three years.

Having been hugely disappointed with KOI Restaurant at the AmbassadorHotel with their Asian offering in general, and their Peking Duck, I had been lusting after my favourite Duck Orange at Haiku, building my menu choice around this dish, costing 3 stars (reasonable at R135), the plain rice costing 1/2 star (expensive). I had to make up another 1/2 star to make the minimum 4 star requirement (R180).  The menu size has reduced, with fewer options.  I chose an old favourite, the prawn and avocado tempura (1½ star), with the avocado very mushy, not how I remember it from the past.   The dish was decorated with a very hot 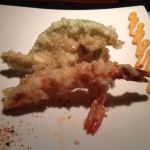 chilli mayonnaise, which one is not warned about, also different to the past.   There was no soy sauce on the table, so I had to ask a neighbouring table for their bottle.   One would have expected each table in Haiku to have one.   Just as I was served the Duck Orange, the waitress asked if I wanted to order wine, not having done so when she took over the table, or when she served the tempura.  The plating of the dish was disappointing, looking like the duck and orange segments were swimming in the orange sauce, which had a strong vinegar overtone, not how I remember it.   I was told that the sauce is made from orange juice, vinegar and sugar. 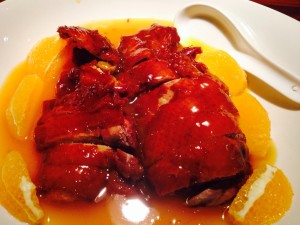 It clearly was missing wine and stock.

Despite the menu being smaller, the choice of what to eat is still difficult, with so many options offered.  I remember the early days, when the waiters had to explain each category of dish, but by now most restaurant patrons are Asian-savvy.   The sushi cost ranges from 1 star (nigiri, maki, hand rolls) to 4 stars (vegetarian, salmon, tuna, Haiku deluxe), while California roll, tuna chirashi, rainbow, and inside out rolls all cost 1½ stars.  Salads are 1½ stars, but Edamame is 1 star, and salmon sashimi 2 stars. Grill items are 2 stars, and include seared tuna, tepanyaki, and Thai lamb piccata, with lime chilli prawns costing 3 stars, and wagyu beef and black cod costing 4 stars.  Soups cost 1 star, including prawn wonton, prawn Tom Yum, and miso.  Dim sum is available steamed and fried, costing 1 star each. Rice is available plain, or fried, with garlic and with coconut, all costing ½ a star, while noodles are 2 stars. In the ‘sizzling’ category, beef and lamb cost 2½ stars, ostrich 3 stars, and chicken and eggplant 2 stars.  In the ‘wok’ section oddly one finds the main courses, including the duck dishes at 3 stars (Peking Duck at 4 stars), crayfish (5 stars), with fish, lamb and beef costing 2½ stars, and chicken 2 stars.  Desserts don’t seem to have changed, costing a reasonable 1 star, and include (0ddly) cheesecake, Thai tapioca, Asian ice cream, chocolate spring roll, chocolate soufflé with orange ice cream, and banana crêpes (1½ stars).

Unforgivable is that the winelist does not supply vintage information.  It broadly suggests pairings, such as spicy foods going with a ‘crisp well chilled white wine or a slightly chilled red wine’, and unwooded white wines being suitable for ‘lighter flavoured dishes‘, while ‘heavier whites and full bodied red wines’ suit stronger flavoured dishes, the winelist advises!  The ‘House wines’ are available by the glass and  bottle, and dominated by Boekenhoutskloof brands,  ranging from R40/R120 for Wolftrap Viognier Chenin to R60/R180 for Haute Cabriere Chardonnay Pinot Noir for the six white wines.  The six red wines range from R40/R120 for Wolftrap Syrah to R130/R390 for Boekenhoutskloof Chocolate Block.  Pongracz costs R60/R240, while Pierre Jourdan is R65/R266. Champagnes start at R895 for Moët & Chandon to R2995 for Dom Perignon. Seven wines are available per wine cultivar on average, the Shiraz on offer ranging from R165 for Guardian Peak to R565 for Boekenhoutskloof.  Other Shirazes that are available are Vergelegen, Allesverloren, Saxenburg, and Kevin Arnold.

When I looked at my bill writing the blogpost, I noticed how sneaky Haiku is – a half star is not charged  at R22,50, but at R25, which is not indicated on the menu!   The bill does not indicate star values, only Rand amounts! I had to pay at the entrance, as my waitress Fiona was nowhere to be seen!  Surprising to see on the bill is that after seven years of operating, the bill still has the name of its sister restaurant Bukhara.

I will only try Haiku in the Waterfront, but am in no great rush to go back to the Burg Street branch.  The poor service, still somewhat arrogant, the very loud music, the disappointing food presentation, and the lack of excitement in eating there all count against it.  I saw managers help clear the tables rather than check on the guest experience.  Only when I walked out did the manager accompany me to my car, and ask how the experience was.  He explained that he is new there, and wants to hear all feedback, a bit late I thought!   It remains to be seen if Cape Town can support two Haiku restaurants, with their decreased standards.