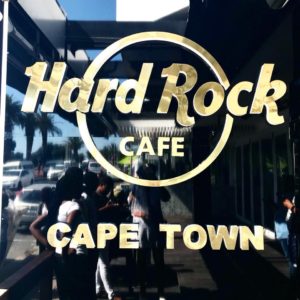 I went to visit the one-week old 140-seater Hard Rock Café Cape Town on the Camps Bay Promenade for lunch yesterday. Whilst the restaurant plays rock music, and pays its respects to the history of rock through the memorabilia it displays, the restaurant is not rocking yet!

The Hard Rock Café is located in the former Mezepoli restaurant space at ground floor level, but 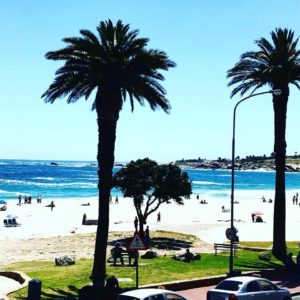 has gone double storey, into the former Baraza space above, in Camps Bay. I had no idea that it was a double storey restaurant, and did not notice the staircase on the left of the entrance. One of the staff directed me to upstairs when I told him that I wanted to take photographs whilst waiting for my Burger. I sat on the downstairs deck, where the tables are very close to each other. I will sit upstairs a next time. The view is directly onto the public facilities across the road, but from the tables at the far end one has a good view of the Camps Bay Beach.

While the signage above the building entrance is strong, one cannot see the even stronger branding which is on the glass stacking door, intended as a photo opportunity, in that it identifies the Hard Rock Café location as Cape Town (main photograph above). A table directly in front of the door hinders the photographic opportunities, but I saw one couple doing a selfie from the 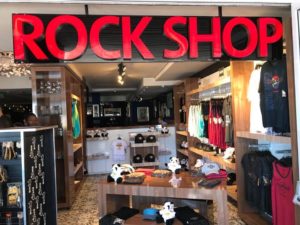 pavement, with the signage behind them.

In general I found the entrance to the restaurant to be undramatic, with a counter with a screen on which Hard Rock Café TV was running continuously, the same TV images being shown in all Hard Rock Cafés around the world simultaneously. A small passageway leads into the downstairs section of the restaurant, with a bar, which is very dark, even on a sunny day, not having any 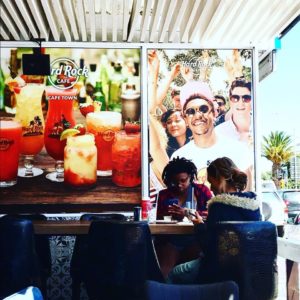 natural light. On the right is the Rock Shop, selling memorabilia, mainly branded T-shirts and scarves (this item surprised me), but also glass jars and drinking glasses. A screen of posters blocks the restaurant from the beachware shop alongside. The Upstairs section is spacious and light and bright, with a bar counter too. There is no upstairs deck, but one can sit at window seats 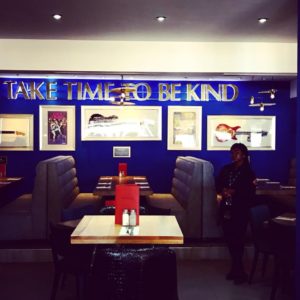 I noticed that both floors of the restaurant have a prominent slogan on a wall, and I should have asked the significance of these. Are they motivational 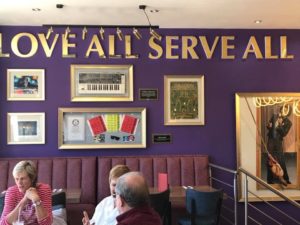 for the staff, or are they a spiritual lesson for customers?

What makes the Hard Rock Cafés unique is the rock 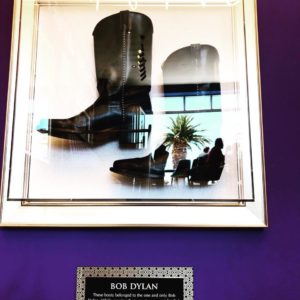 memorabilia displayed throughout the restaurants. I was told that the first Hard Rock Café opened in London in 1971, and it was Eric Clapton who was the first musician to donate a guitar in return for the use of a table in the restaurant at no charge whenever he visited. This became a trend, with numerous artists donating musical instruments or clothing. The Cape Town branch displays a pair of Bob Dylan’s boots; a Chrome DW Drum Kit 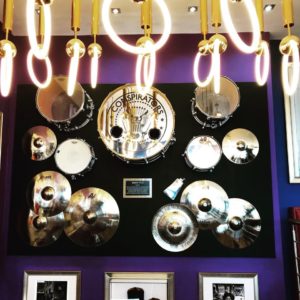 used by drummer Brent Fitz whilst touring with Slash; a black bodysuit with gold zips of Ellie Goulding; Katy Perry suede belt worn in the making of ‘I kissed a girl’; a black bodysuit with safety pins worn by Kesha; a Gibson Les Paul Studio guitar belonging to Les Studio; an Amberburst PRS guitar, used on the 2001 Madonna tour; a custom microphone stand used by Rihanna at a performance at the American Music Awards in 2009; a Japanese Style jacket of Sky & the Family Stone; a handwritten score of the Temptations’ ‘You’re my Everything’; and a signed LP cover of Paul Simon’s ‘Graceland’.  This information is not easy to find whilst eating at the restaurant, but is listed on the website. It adds a rich dimension to the visit to the Hard Rock Café, the dining experience becoming secondary.

I sat on the deck at street level, at a table with wood top and cheap faux velvet chairs in blue. Other tables had the chairs in black. The table only has a sideplate, Nova Vision cutlery, and a gauze napkin, and the cheapest glass salt and fine pepper cellars. The crockery is by Continental China, its cream (‘rustic white’) 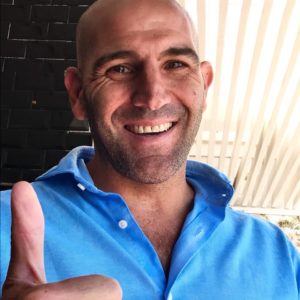 brown-speckled design not appealing to me at all, but all South African branches use this design.

I was very fortunate that South African Hard Rock Café franchisee Troye Harding was at the restaurant, and without asking for him, he approached me, and started to chat. He owns the Johannesburg (opened four years ago) and Pretoria (opened a year ago) branches too, and a Durban branch is on the cards. He gave me an interesting insight into the stringent cleaning and quality control  procedures they have to follow, with reports sent to the Eurasia office of the Hard Rock Café Group, with a quarterly visit on site to test various aspects of the operation, particularly in the Kitchen, for the benefit of hygiene and consistency. He told me that buns and patties have to be a specified size, and weight. Testing by the regional office staff is ruthless. A monthly springclean is held in the Gauteng stores, and  it becomes a fun event for staff, the ‘spring cleaning party’ involving dancing too.

For the Cape Town store opening, trainers from Egypt, Dubai, Johannesburg, and Pretoria worked with the local staff.  I found the staff to not be proactive at all, when it came to asking my satisfaction with the meal, and in topping up my water. A promised menu copy did not arrive, and had to be chased up. Condiments were not provided. A bill request had to be repeated. A number of the staff stand and chat to each other. Staff wear guitar badges, some more than one, and these are rewards for achievements.

The stores which Tyrone owns are official licensed Hard Rock Cafés, unlike the former stores in our country which were not licensed. He told me that he has a very good relationship with his Promenade landlords the Solomon Brothers, and that he has managed to negotiate a good deal with them. They would have loved to have the beachware store next door for their Rock Store, as the retail arm of the business is an important income generator. It has taken space from the restaurant operation, as the next door space was not available to the Hard Rock.

Tyrone is very aware of the seasonality of Cape Town, and the winter slump in the hospitality industry. They are obviously wanting to attract locals into the restaurant, not only the Camps Bay residents, but also those as far away as Durbanville. They have plans for a ‘Show us you are locals’ campaign to run on Social Media, which will give locals a loyalty card and 20% off. Tyrone noticed my salad of tomato, lettuce, and croutons arrive, and sent it to the kitchen for improvement, and it was returned with feta, and olives added.

The menu is A4 in size, neatly bound, with a red faux crocodile ‘leather’ cover. Colour photographs are used throughout, some full size, and others smaller to illustrate the dishes. I have seen more attractive mouth-watering menus elsewhere. The inside menu cover contains a collection of words describing their Burgers: ‘flame grill’, ‘legendary’, ‘burger’, and ‘hand-crafted’.  The menu pages are printed on thick board, in gloss.

Starters cost just under R100, including bruschetta and nachos;  flatbreads cost between R55 and R92;  salads sound expensive, at over R100; nine Burgers are offered, the majority costing R125 (Atomic Burger, Java Lava Burger, Guinness Bacon Cheeseburger, Local Legendary, Hickory Barbecue Bacon Cheeseburger, the Big Cheeseburger, and the Original Legendary Burger. Burger add-ons can be ordered. I no longer order Burgers due to my weightloss program, but felt that the Hard Rock Café was first and foremost known for its Burgers, and therefore ordered the plainest of these, the Classic Burger (R89), with a bun, a slice of tomato, lettuce leaves, and a 170 gram beef 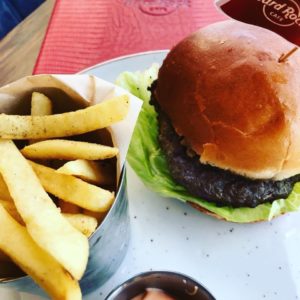 patty, served with chips, and a dipping sauce. I was allowed to exchange the chips for a healthier salad, made of lettuce leaves, olives, tomatoes, croutons, and feta cheese, thankfully without a dressing. A surprise was not being offered ketchup with my burger, but I did see All Gold Mustard and Tomato Ketchup bottles on another table. I was told that this was a Service omission. I took off the top half of the bun, trying to avoid eating flour-based foods, but retained the bottom half. Despite the 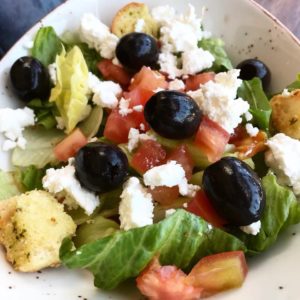 knife being serated, I struggled to cut the bun and patty.

Ribs cost over R200, while half a barbecue chicken is charged at R149; sandwiches cost over R100; steaks range in price from R175 to R210; three dessert options cost between R79 and R98, on the high side.

Cocktails cost R80 – R90; no other alcoholic beverage details were contained in the menu copy I received.

Bob Ndngi is a Manager, and he organized a copy of the menu for me, and recognized me from my Camps Bay days, as he had previously worked at Blues. He told me that they will Cape Town-ise the menu, already having added hake and chips (R90), the other two Hard Rock Cafés not offering this dish. They may offer a Local Burger, perhaps with Fish. I suggested a healthy Burger option. They have up to 30% flexibility to amend the menu for each city in which they operate, and it appears that they are open to customer suggestions.

I loved learning about the Hard Rock Café operation, and had I not met Tyrone I may have been more negative about my eating experience at the new Cape Town branch. I was grateful to Tyrone and Bob for the time each of them spent with me, unarranged, in providing information about their very structured operation. I provided feedback to Bob about the service issues which I had experienced.

I do not make any income from my Blog, and would not charge for any interaction with a restaurant, wine estate, or other supplier. I Instagram most of my photographs and use these in my posts. I Tweet and Facebook links to my Blogposts after publication.