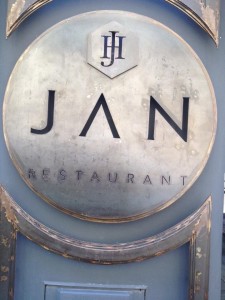 Last Friday my life changed, when I had the pleasure of meeting the nicest possible Chef Jan-Hendrik van der Westhuizen in the world, and eating at his Nice-based Jan Restaurant, which opened almost two years ago. To my knowledge it is the 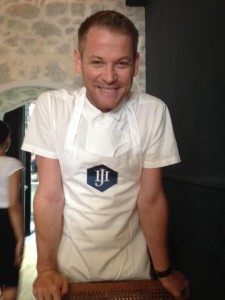 only South African chef-owned restaurant listed in a Michelin Guide!

I first heard about Chef Jan from the Facebook page of Errieda du Toit, and was granted a Friend request!  I loved his photographs, and the Michelin Guide listing achievement for one of our locals made me determined to visit Nice, just to eat at his restaurant. I did not know anyone who has been there before. He was patient when I changed my dates three times, due to traveling date uncertainty. I had planned nothing for Nice other than the restaurant visit, and Jan took control of my program, after a traumatic accommodation disaster, by showing me Nice’s well-known Cours Saleya market, on his day-off on Sunday, and showing me some of the coastline of the French Riviera.

I was welcomed with a glass of sparkling wine, which I declined due to 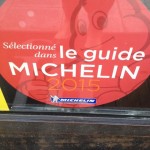 the start of a bad flu. Chef Jan came to my table to greet me, feeling like a friend almost immediately, oozing South African hospitality. He explained that his restaurant had received a listing in the 2015 Michelin Guide just eight months after having opened, receiving two knives and two forks. The Michelin inspectors are renowned for their undercover evaluations, and only surprise the restaurant staff with their identity once they have completed their meal. The second evaluation for 2016 was done recently, and the response after the meal by the inspector was ‘impeccable’!

The venue is a block from the Promenade des Anglaise (built by the British to escape their cold summers in Nice, by walking along the sea), and Nice port. It was previously a Vespa repair shop, the area being the ‘Woodstock of Nice’, up and coming! I saw the ‘before’ photographs, and the transformation is unbelievable! A metal gun blue/grey interior, taken to the exterior too, with one raw brick wall, gives class.   Outside there are two small trees, a chair, and rope stands, distinguishing this venue from anything else on the street. Decor is sparse, with one painting, a very large mirror, and chandeliers that come from the Metro in Paris. Wooden chairs with black leather 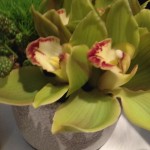 seats were handmade in Paris.  Where I sat a frieze had been created, not originally part of the interior. There was a little alcove too, just big enough to take a vase with unusual green orchids. Chef Jan shared that their florist also services the Nice home of Elton John.

Chef Jan studied cuisine at the Zevenwacht Chef School, and did stints of cooking at the Cape Grace with chefs Craig Cormack and the late Bruce Robertson, at Neethlingshof, and The Lord Charles Hotel  during his internship. He was a private chef in the home of a notorious Cape Town couple, then did a course in photography and design, handy for a chef to have as a skill in this day and age of Social Media. He worked in Cape Town and in Paris at Elle. He cheffed on a yacht in the Riviera for two years, until he decided to open his restaurant Jan.

Maître D’ Philippe, who previously worked at the Nice landmark Le Negresco and The Savoy Hotel in London, brought a cloth for me to wipe my hands, an old-world touch. Tables are covered with table-cloths, there are material serviettes, and bottles of olive oil and balsamic vinegar by 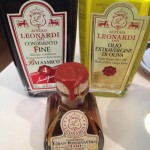 Leonardi. The salt and pepper grinders are by Peugeot, made from cherrywood and real silver!

There were two menus.  It being a Friday, the only day of the week that they open for lunch, they offer a Market Menu (3 courses at €32) and a Tasting menu (5 courses at €52 without wine, €72 with wine). Chef Jan checked if there were any food constraints, and then the flow of dishes just kept coming to the table, being a mix from the Market and Tasting menus! Each one of the courses was personally introduced by Chef Jan.

I did not expect a South African touch to the menu in Nice, the bread 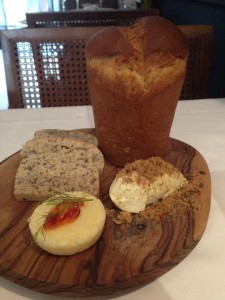 board containing Mosbolletjie bread, and Cape seed loaf! This was served on a wooden board with whipped pork lard sprinkled with biltong powder, and special French Echiré butter. Very 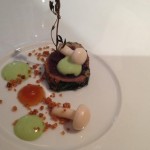 quickly the Amuse Bouche arrived, herb-crusted seared tuna served with enoki mushrooms, Rooibos gel, and peanut crumble, a small and delicate taste of what was to come out of the kitchen. 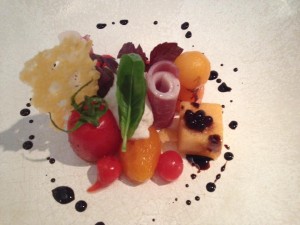 This was followed by a refreshing summery salad, made up of three tomato types (the Roma ones de-skinned), a roll of Parma ham, spanspek granita, Burrata, a leaf of basil, topped with mustard foam and a Parmesan crisp, and drizzled with a 100 year old Leonardi Balsamic vinegar, Chef Jan owning bottle number 25 of only 50 bottles in the world, sprinkling the precious drops on my plate personally. 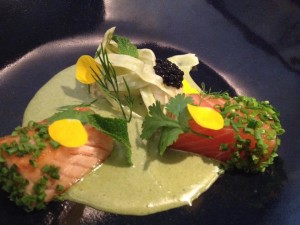 ‘Norwegian salmon in a herb garden’ was presented in two styles, one piece seared, and the other marinated in lemon and coconut milk. Herbs included mint, coriander, and shaved fennel, served with wasabi cream, pansy petals, apple strips, and topped with herring eggs marinated in squid ink! The dish was served with a fish knife and fork.

Chef Jan published his first book in 2013, wrote the copy himself, and 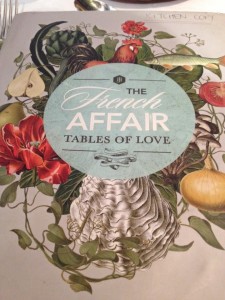 photographed all the dishes. He had a kitchen copy in the house, and it was well-used, still used by the chef to cook from. His mother and grandmother are his cooking inspiration, and Chef Jan cooked for the first dinner party at the age of seven, his mother Hester (visiting from Middelburg) shared. He is very close to his mom. He pays tribute to his grand-mère Ouma Hessie once a month, in hosting a dinner with typical South African dishes and paired with South African wines.

Bourride, a Provençal Bouillabaisse, was served next, with red mullet, a king prawn, an asparagus spear, clams, garlic aioli, carrots, and a 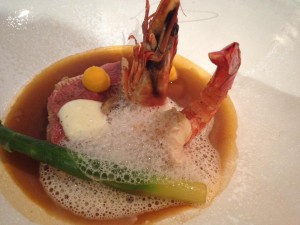 somewhat salty lobster broth, a beautifully presented dish. The bathroom door is close to the kitchen (so stylish, with a jug of lemon branches, and a leather chair with a Zebra skin cushion), so I asked if I could take a picture of chef Jan in his blue kitchen. There I was introduced to Chef Kevin Grobler, who recently joined the kitchen team from Delaire Graff Restaurant!

After a break, Chef Jan brought a slow-braised pork belly to the table, 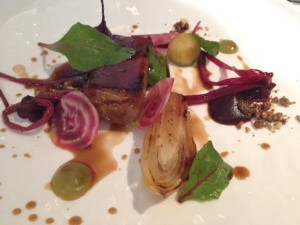 with apple and mint gel, caramelised endive, beetroot slices and gel, and caramelized sunflower seeds. The meat-knife for this course was by Degrenne Laguiole, an attractive knife compared to what we see as a steak knife in our local restaurants. 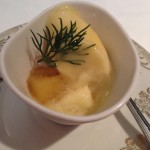 The palate cleanser was a refreshing marinated pineapple compote and sorbet, served with a drizzle of passion fruit juice, Espelette pepper, and topped with a fennel leaf.  Mimi Gormezzano was lunching, and had been a food writer in New York before moving to Nice about 14 years ago.  She came to say hello, and sang Chef Jan’s praises about his superb cuisine, which she enjoys every Friday lunchtime! She feels he is already deserving of a Michelin star! She visited our country in 1996 on a gourmet trip, as a guest of SA Tourism. A second American patron came to my table, and also shared that Jan deserves a Michelin star! 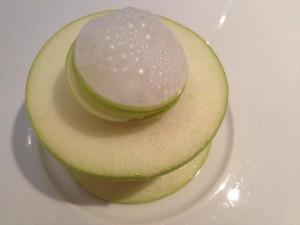 I loved the simplicity of the presentation of the cheese dish, with slices of a Granny Smith apple layered underneath and on top of a curled 18 month-matured Comté cheese slice, which was filled with fig and sheep’s milk cheese from Corsica, topped with goat’s milk cheese foam!

The dessert was beautifully plated in a beautiful plate, a slice of flan 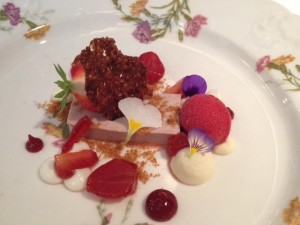 with fresh and compressed strawberries, a hazelnut tuile, coconut mousse, and white chocolate mousse, with pansy petals finishing off the dish. Chef Jan had done some homework about me, the sign of a smart chef and business owner, and proactively offered me a dry cappuccino.  This was served perfectly made with a piece of Turkish delight on the saucer, with a surprise bowl of cherries on ice, my favorite fruit! 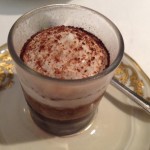 I had been spoilt with a flow of dishes over a four-hour period,  but this was not the end.  Once again, Chef Jan had read that I love Tiramisu, so had prepared a taster of it as the very final dish he spoilt me with!

The passion for hospitality and food is in Chef Jan’s genes, his parents owning game farm Meloti Valley near the Loskop Dam, on which they host weddings, and can accommodate about 100 guests. Hester handles the functions, preparing the food, and managing the events and accommodation bookings. So too it comes to the fore in Chef Jan, who hosts food tours three times a year, one heading for Champagne and Paris later this week, and another heads for Italy in September. Most of the tour group guests are South Africans, and they eat at Michelin star restaurants, buy products at the food markets, and then prepare their dinners together, also taking time to see an opera, do a cruise on the Seine, and enjoy a gourmet picnic. In Italy they will hunt truffles in Piemonte.

I did not look at the wine list, and it is not on the website. Chef Jan told me afterwards that he is supplied with South African wines by a Belgian importer. He stocks Ken Forrester FMC, Graham Beck Brut Rosé, De Toren, Hermanuspietersfontein (their house wine), Buitenverwachting, and Jordan, commenting that no South African wine estate has approached him to stock their wines.

The dishes I was allowed to experience were superlative, and reflect the fresh, local and seasonal Mediterranean fruit and vegetables available. The service is very discreet and professional, the regular visits to the tables by Chef Jan making him so popular amongst his patrons. Everything about the restaurant is stylish, every detail has been well thought through, culminating in a unique bill folder with a cigar box feel but with the same gold cover design as that of the menu.

I could not fault anything at Jan Restaurant, and left the restaurant on 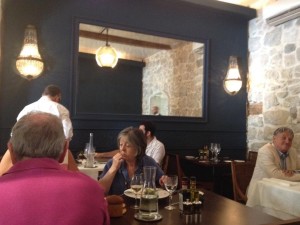 a high, but only after Chef Jan had escorted me to his favourite fruit and vegetable shop around the corner, to show me what they stock! This was the ultimate treat, especially as Chef Jan had to step into the kitchen for evening service again. They called a taxi for me, as the Uber service was not available in the late afternoon, and Chef Jan popped a 1 liter bottle of water into my hands, in case I would dehydrate on my way ‘home’! Philippe became kinder as the afternoon went along, and helped me spell the French names. I loved the music playlist, mostly reminding me of a Woody Allen movie soundtrack, matching the restaurant mood and style perfectly. A surprise was hearing ‘Patta Patta’. I felt like the luckiest girl alive, having met such a fantastic approachable chef who clearly loves cooking, and who is destined to go far, with a Michelin star not being far away.

POSTSCRIPT 1/2:  It has been announced that JAN restaurant in Nice has gained its first Michelin star! 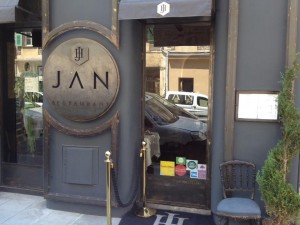