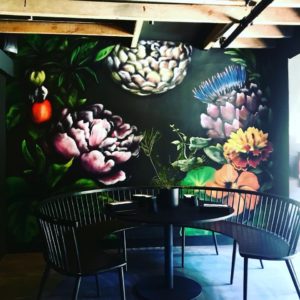 Last week my special friend Stuart Bailey and I ate at Janse & Co, the restaurant on Kloof Street, which Chef Arno Janse van Rensburg opened with his partner Liezl Odendaal two months ago. It reflects perfection in its decor, its service, and its menu, with beautifully presented dishes.

In the time that I waited for Stuart to arrive, I took photographs of the restaurant interior, as 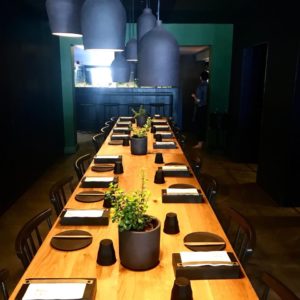 well as of the spacious outside courtyard, and chatted to Chefs Arno and Liezl. It was a surprise to see Ronel Smidt as the acting Manager, who was the Restaurant Manager of Catharina’s at Steenberg, and more recently from McGregor, where she cooked curry at Carol’s Pub before it was sold. Our waitress was YoYo.

Coincidentally, it having taken two months to arrange the lunch with Stuart, the proof of my first book ‘SwitchBitch: My Journey of Transformation from Sour to Sweet’ had been delivered by the printer earlier that day, a reason alone to celebrate, Stuart having played an 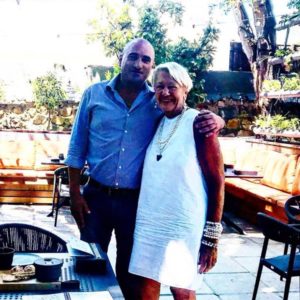 important role in finalizing the book title, and nudging me to get the book finished. Le Lude Brut Rosé has never tasted so good!

It is hard to see the restaurant from outside, its signage being low-key and understated. The space previously housed Ocean Basket, and more recently Yuzu, the latter restaurant not lasting very long. The interior is dark, all in grey, especially at the lower level, which opens up to the open plan kitchen. As one enters the restaurant, one sees the impactful mural on the far wall, created by Care One Love, who did the murals in the bathrooms too.  Furniture comes from a number of suppliers, using Dark Horse for the leather chairs, Houtlander for the wooden chairs, and CaneTime for the outside grey tables and chairs. Some have said that the interior is similar to that of Maison, but 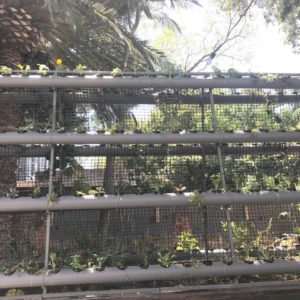 Arno assured me that Weylandts has no stake in the new restaurant. Only light fittings were sourced from the interior decor store. At the step down to the lower level of the restaurant is a planter with a mix of herbs and indigenous plants, not all of which have survived being indoor, Ronel told me.  The outside area is cleverly divided into two, by means of a hydroponics structure filled with plants in little pots, which are watered with left-over water from the ice buckets.

Tables have Spekboom plants in pots, a side plate with a wooden butter knife, and a ceramic 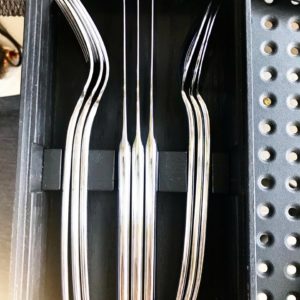 cup holder for water, both by Revol from France. What blew me away was a box with a sliding lid, almost like a wooden box one had for one’s stationery at school, containing three sets of Sola cutlery neatly presented on a bench, with a gauze napkin, and the menu, folded and printed on grey paper. The cutlery being on the table prevents waitrons from having to place it on the table for each course, and the inevitable stretching which comes with it at many restaurants, a pet hate of mine.

The menu deserves special attention. It is simply and clearly laid-out, detailing the cost of the meal, at R385 for three courses, R485 for four courses, R585 for five courses, etc. Seventeen course options are listed, as well as three desserts, which one can choose to order.  Something I have never seen on a menu is a glossary, defining the terms used in the menu, such as ‘Shiso’, a Japanese herb which has a basil, mint, citrus, and cinnamon flavour profile; and ‘Buchu’, informative for tourists who may not know our fynbos used for medicinal purposes. The menu also lists the wines and spirits offered (more about this later).

The restaurant philosophy is detailed on the front page of the Menu: ‘Sourcing our ingredients and knowing their origins, is just as important as utilizing them to their full potential. Building relationships with our suppliers, supporting local farming practices and small producers, creating a network of professionals that share the same vision, to progress and inspire. Being resourceful in our approach creates a dialogue between our team and other artisans, this is an important step in the creative process’. 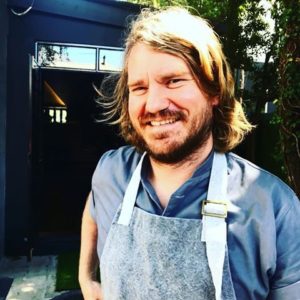 Chef Arno was previously the Executive Chef at The Kitchen at Maison, opening the restaurant on the boutique wine estate in Franschhoek. He took the restaurant to Eat Out Top Ten, but has never chased Awards, nor does he display ego as so many of the top chefs in Cape Town and the Winelands tend to do, Chef Arno quietly getting on with his love for cuisine. He has impressed with the search to grow himself and his culinary talent, by spending time in Peru, Scandinavia, and Spain, during the restaurant’s month-long closing time. He came to chat to me, and the happiness in owning his own restaurant radiates in his face. He did intimate that it was a rough beginning, transitioning from a building site into a fully operational restaurant mid-December. I had popped in three days before opening, and was astounded at the confidence they had in meeting the opening date. His partner Liezl is the Pastry Chef, having previously held the position of national Head Chef for the Weylandt’s Cafés, and at Ellerman House and La Colombe prior to that. Chef Arno has been delighted to see his regular Maison patrons at Janse & Co.

The water question arose quickly, bottled still or sparkling, and I requested tap water instead, the way I prefer to drink it. Then came a speech about filtered water at R25 a head, which I 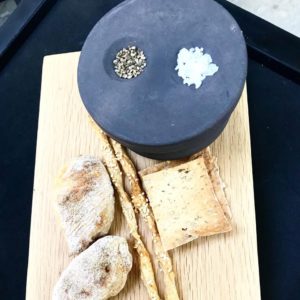 declined. I was served tap water by YoYo.

I was told that Eat Out would be in the house, for the farewell lunch of its Editor Abigail Donnelly, and I loved the Universe’s sense of humour in bringing us into the restaurant on the same day!
We were separated by the hydroponics structure, but I could not help resisting going over to Abigail and to thank her for all she has done for the industry through the Awards, even though I have been its most vocal critic over the years. Jokingly, I thanked her for inviting me to her farewell! 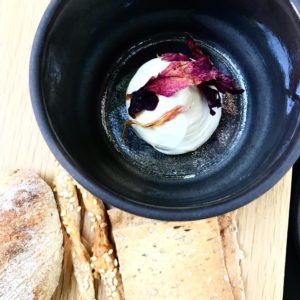 YoYo came to take our order, reiterating that no dish contains more than three to five ingredients, a cuisine approach which I far prefer, in that one can appreciate each element.  She also told us that many dishes contain ingredients which have undergone fermentation, that each dish is served in 60 – 80 gram portions, and that we could choose from any of the twenty dish options in total. She brought a bread board with a clever butter dish made by ceramicist Diana Ferreira, its lid holding crushed pepper corns and salt crystals. I had never heard of Klipkombers ciabatta, which was described as having been made with seaweed, foraged by Chef Arno himself in the Kommetjie/Noordhoek area. In addition, the board contained sesame and cheese bread sticks, as well as rye caraway crackers. With it came the Olive Oil whipped butter.

Stuart and I tasted each other’s dishes, having ordered three different dishes each: 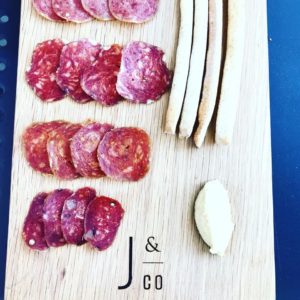 #  Stuart started with housemade charcuterie, served with mustard and Buchu, and more bread sticks. Unfortunately the charcuterie styles were not mentioned by YoYo, and I did not think of asking her, as Stuart and I were engrossed in conversation. Charcuterie is a passion of Chef Arno, and he visited Spain with the express purpose of learning more about 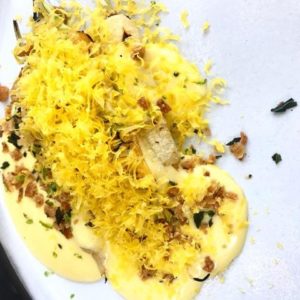 meat curing. I liked the branding on the bread boards.

#   My first dish, served in the order selected by the kitchen, was a colourful carrot, duck egg hollandaise, served with pangrattato, which the menu glossary defined as ‘Poor man’s Parmesan’, being pan-fried bread crumbs with herbs and garlic, used instead of Parmesan by poor Italians. It was the most 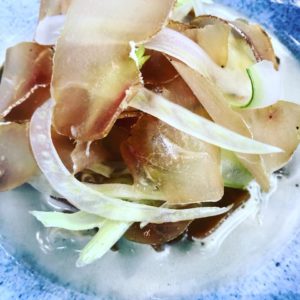 unusual way of serving what was essentially a carrot dish, crispy and crunchy in texture, and suited my new healthier eating style perfectly.

#  Stuart’s second dish was Chicken Bresaola, a free-range chicken breast which had been salted, brined in white wine, and air-dried, served with fennel bulb 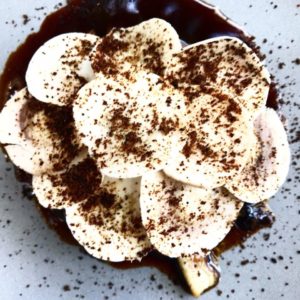 shavings, and rarely-seen rhubarb, which was an element in the chicken stock sauce too.

#  I loved the presentation and taste of my second dish, it being the rarest slices of hangar beef, served with button mushrooms, layered with fermented
oyster mushrooms, on top of a red wine jus. 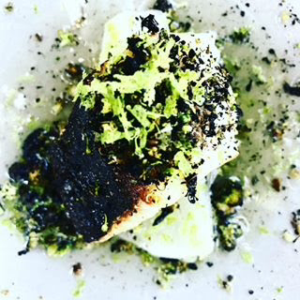 #  Stuart ended off his lunch, sadly (for me) having to leave to a meeting, with yellowtail served with a fish and daikon broth, and 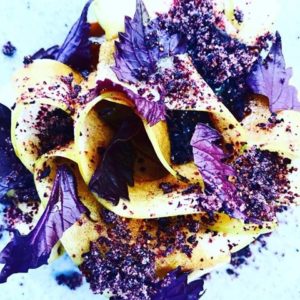 #  I loved my colourful cheese dish, with a bed of ash goat cheese, slices of apple, and blueberry powder, as well as the most beautiful purple shiso leaves (as described above), the favorite of those that we tasted.

While I was Instagrammng after Stuart had 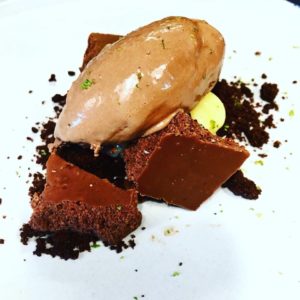 left, meeting Chef Arno on his way out, I decided to order a dessert after all, selecting the gluten-free dark chocolate sponge, ice cream, and lemon curd with home-made Aero-style aerated milk chocolate. I ordered a dry cappuccino with it, YoYo being the coffee-making star in the house, I was
told, 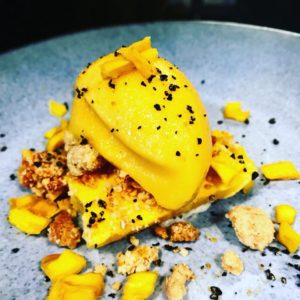 and it was strong dark roast, sourced from Kamili. While waiting to photograph it at the pass, I was able to photograph two other desserts too, the pecan nut, gooseberry, and caramel dessert; as well as the mango, passion fruit, 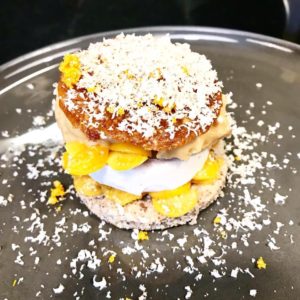 I had enquired telephonically about the Le Lude Brut Rosé, and was told that they only offer the Brut, which I had seen on the website. I was told that I could bring along my Brut Rosé, at R100 corkage, very steep, but worth every penny. Other bubbly options are Tokara MCC 2011 (R950), Drappier Carte D’Or Brut Champagne NV (R680), Strandveld Pinot Noir Brut 2015 (R380, and R90 per glass), and Claudia MCC Brut 2011 (R350, R80 per glass). Vanilla Peach Kombucha is an interesting presence on a wine list, at R70. The beer selection is tiny, with three beers only, two of them being ciders (Eversons, and Jack Cluver, at R45 each), as well as Darling Pilsner Draught, at R50. Thirteen red wines are on offer, the Leeu Passant Dry Red 2015 made by the Mullineuxs being by far the most expensive at R1450. Kershaw Wooded Chardonnay 2016 tops the white wine list in price, at R750. Wines by the glass for red and white cost from R50 upwards. The wine list reflects a mix of wine regions, and a number of wine brands were unknown to me, being smaller producers.

I was very impressed with the professionalism of Janse & Co in all respects, notably its less is more decor and food, the unique cutlery/napkin/menu box, the murals on the wall and in the bathrooms, the herbs grown on the property, and the colourful and creative food served. The filtered water and its cost bothered me. YoYo was friendly and efficient. It would have been nice to have Chef Arno come out and meet his guests, but he is hands-on, so I understand that he is in the kitchen. He is friendly and chats to patrons at the pass. Telephonic contact is difficult, the phone not always being answered, and calls not returned when one leaves a message. Chef Arno said that they would like to encourage all contact to be done via their reservations website. A lovely touch was that the bill was 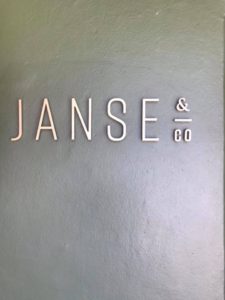 presented in the same cutlery box, with a ‘Thank you’ card on the lid, with the contact details of the restaurant. With Pierino Penati, I rate Janse & Co as our two most outstanding restaurants in Cape Town.