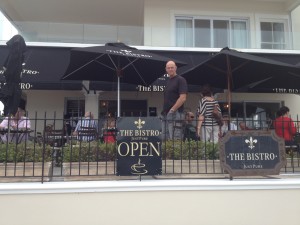 Looking for a coffee shop in Hermanus over lunch yesterday I popped in at Just Pure The Bistro, located within a showroom that sells the Just Pure pure skin and body care range.  I had no intention to write about my sandwich and coffee stop, but the dreadful service from the staff and owners compelled me to write a review.

The balcony has a fantastic view onto the ocean, and the ocean was particularly rough yesterday, with massive waves, making it a pleasure to sit outside.  I used to love going there when Bellini had its art gallery and coffee shop in the same space.  I walked inside the shop, not having been there for some time, and saw that the Just Pure showroom still looked the same, found a Cape Times on a table, and chose a table to sit at outside.  I was not welcomed by any staff, and saw a waitress yawning as I wanted to ask her for a table.  She brought a menu and I placed my order of a glass of ice, a jug of milk, and an espresso, wishing to make my own iced coffee, and a glass of ice water.  She brought the ice on a saucer, and there was no glass into which I could pour all the ingredients.  She returned with the same number of ice cubes in a glass, so I had to send her back to fill it up.

I chose to order a ‘Country Loaf’ sandwich, from the ‘Gourmet Open Sandwiches‘ section,  with tomato, mozzarella, and avocado, which I asked to be toasted, and expected a seed type loaf.  The waitress returned, after having taken the order, to double check that I wished to only have one slice , described confusingly in their menu as a half portion (R49), two slices being a full portion (R65).  It took at least half an hour to be served, but it gave me a chance to read the newspaper, and to catch up on Social Media, having spent about two hours driving to Hermanus.  What I was served was an attractively presented but non-gourmet plain slice of 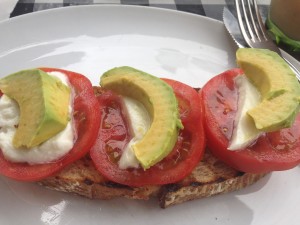 toasted sourdough bread.  I called the waitress, and she told me that the bread was definitely the Country Loaf.  I asked her to call the Manager, no such person having come out onto the terrace in the time I was there to check on the customers. The owner Tamsin Koen (whom I identified via their website afterwards, and whose photograph on their website must be about 20 years old) came to the table, and was defensive from the word go.  I told her how tired her waitress was, and that she made so many mistakes just to get the iced coffee components together.  She told me that she had just received a fabulous compliment for the same waitress, and was not interested in my feedback about her!  She then told me that all their

customers love the country loaf, and that she recommend that I eat it.  I told her that I expected something seeded, so she suggested another bread style, only having a few seeds on the top, or the sourdough rye, which was not half as good as the Country Loaf!  I insisted on the bread with the seeds on it, and she returned with a slice that had shrunk by one third, including the toppings!  She explained that the slice was shorter but squatter!

Tamsin then asked me what my name is, and I told her my first name.   She then went on a vicious attack, telling me that she had been warned about me, being someone who only slates restaurants, and that I was obviously just being difficult.  I didn’t bring my notebook with me, so there was no proof that she was correct about who I was – I had only photographed the first sandwich, which the owners probably didn’t see, as they were inside.  Tamsin continued her rant, and then grabbed the plate with the sandwich from the table, hurling abuse at me.  I decided to leave, even though I had only had two bites of the sandwich, and while taking a photograph of the exterior, Tamsin’s husband Louis (identified from their website) ran after me, wanting to grab my cellphone, saying that photography is not allowed, even though there is no sign to this effect, nor is it mentioned on their website.  I took another shot of the exterior from my car, and he proudly posed on the terrace for it, but then changed his mind, running to my car, which I had got into safely, and tried to interrogate me about who I am and where I am from, all their customers watching the spectacle he was making of himself from the terrace.

The menu is on the website, and contains a list of breakfast dishes, cakes (from R30) and scones (R25), salads (from R55 for a Greek salad to R79 to a salmon salad), toasted sandwiches (R48 – R65), cheese board (R79), burgers (R74/75), salmon fish cakes (R79), quiches (R58), and pies (R75). A Kid’s menu is available too.  The winelist is part of the menu, most wines being available by the glass and bottle, but no vintage information is provided. Misleadingly they have a heading ‘Champagne/Sparkling wine’, which only contains the latter, being Stellar Organic (R120) and Claudia MCC Brut (R195).  The wines are proudly-Overberg, and well priced, all being under R200, sourced from Beaumont, Creation, Gabriëlskloof, Sir Robert Stanford, Newton Johnson, and Cutters’ Cove. Corkage costs R30 per bottle.

As I had not made notes and did not plan to review the restaurant, there is little additional information to provide.  The Bistro tables are extremely small, only adequate for one person to eat at. Paper serviettes are offered.   The website states that the coffee is organic, and that they source organic ingredients as far as possible.  I was told that their breads are supplied by Trevor Daly from Worcester.  I heard at another restaurant later that day that a customer had ordered a Coke at The Bistr0, and that the waitress told him that they are not allowed to sell it to customers as it is too unhealthy, even though they stock the beverage and allow the staff to drink it!

The website claim of being ‘familiar (sic) and welcoming‘ is devoid of all truth, and completely misleading.  Just Pure is first and foremost a beauty range outlet, which the Koens started in 2007, having added the Bistro two years ago when they moved into the present location.  Funny is the explanation of the Fleur de Lis symbols for their logo, being an ‘… icon to represent Just Pure and our commitment to ourselves (!) and the environment‘! The service and food I received was a complete contrast to their brand name of ‘Just Pure‘, being impure in every respect!