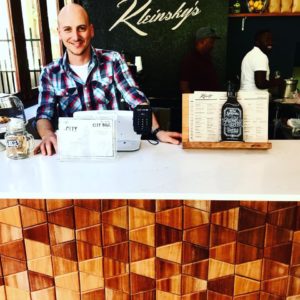 Yesterday I met Urban Lime Marketing Director and friend Katie Friedman for lunch at Kleinsky’s, a New York Deli-style, kosher-style, Jewish cuisine eatery on Church Square, being developed as an exciting new inner-city food hub. Kleinsky’s is the second Delicatessen to be opened in Cape Town, its Sea Point branch having opened two years ago. 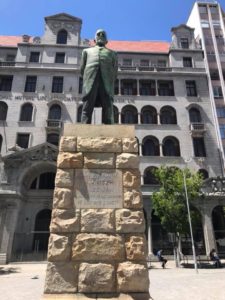 operating in London, Cape Town, and Durban. Church Square is a new project in Cape Town, overlooking the Church Square, the Groote Kerk being the church referred to. The statue of Jan-Hendrik Hofmeyr, sculpted by Anton van Wouw, proudly faces the church on the Square, a Dutch Local leader who was fondly known as ‘Onze Jan’, and lauded for introducing Afrikaans as an official language in South Africa. He also fought for freedom of speech, Katie shared. 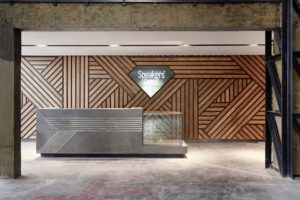 The Church Square development is a heritage site, the Square having first been established in 1706. It includes the Speakers’ Corner building and opposite it, The Piazza, both on Parliament Street. The company has also bought 4 Spin Street, on the opposite side of the road to the Square, which will be home to Afro’s Chicken from Durban plus an all-day Eatery. Speakers’ Corner will contain meeting rooms, some Eateries, and on its newly created 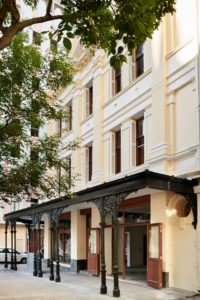 glass top on the rooftop a South African based Michelin-star chef is to open a signature restaurant. Katie is still mum as to who the chef will be. Kleinsky’s is the first Eatery to open in this area, with Manga sushi outlet opening later this week, to be followed by Seattle Coffee Co. Katie has an exciting plan for Church Square and is looking to raise funding for it.

I arrived ahead of Katie, and owner Adam Klein told me that his new Eatery has led to the setting 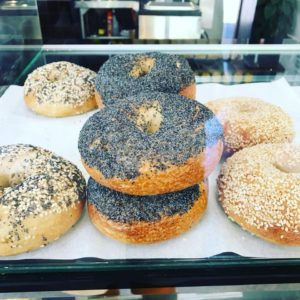 up of a new bakery in Maitland for the production of bagels, one of the foundation dishes in his two Eateries. Not only does the new bakery supply his two outlets, but it also delivers to other businesses. In the counter in the new outlet a glass section displays various styles of bagels, including poppy seed, sesame seed, plain, onion, pumpernickel, and multi-seed ones. Adam emphasized that the Eatery serves Jewish cuisine in a ‘kosher-style’, but is not kosher. It is inspired by New York Jewish delis, many dishes having an Eastern European origin. He described it as ‘nostalgia food’. 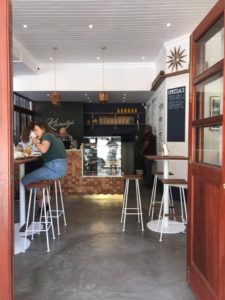 The space at Kleinsky’s is reasonably small, with four high tables and chairs inside, and more to be set up outside once the weather improves, in a walkway which connects Adderley and Parliament Streets. All tables have wooden tops, and chairs have wooden seats too. What looked like tiles to me initially in fact was an intricate design of interlacing pieces of wood in the counter, all of the wood work having been created by Adam, a love he has in addition to creating the food at his two outlets. Brass lamps hang over the counter, and two plant baskets are randomly hung in the Eatery. A framed print of an ink drawing of the nearby Company’s Garden by Lucie de Moyencourt hung above our table, and a folder of her drawings was on the counter, available for sale. I first heard of Lucie when I saw her drawings of the Zeitz MOCCA museum of contemporary African art for sale at The Yard in the Silo District in the

The tables contain a glass jar holder with cutlery, forks by Nova Eloff and knives by Fortis. Paper serviettes are offered. Goldcrest black peppercorn and Cape Foods Atlantic Sea Salt grinders are on the table. The menu is on a wall, but A4 paper copies in a light brown are brought to the table, with an explanation of each dish. I ordered a dry cappuccino, and it was perfectly made. Katie ordered 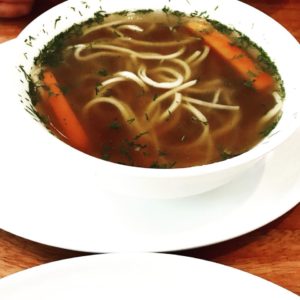 her latte with almond milk.

The menu explains that their breads are baked in-house daily, using traditional recipes and methods, which are not explained. Bagels are handrolled, slow fermented overnight, and boiled in honey water before they are baked, the menu informs.

Katie ordered the chicken soup, described as chicken broth with celery, carrot, and dill, with noodles (R46). Adam apologized that they did not have Matzo balls in stock, and so she ordered a plain bagel with butter instead. I chose the California Salad, with salmon, lettuce, cherry tomatoes, cucumber, sesame seed, and avocado, 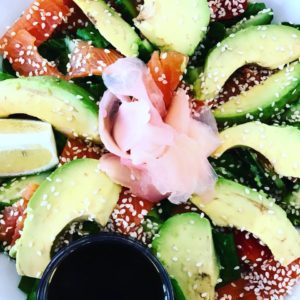 accompanied by pickled ginger and a soy reduced dressing. I had asked for the spring onion to be excluded (R78). It was beautifully presented. I could not finish it all, and took half of it home with me.

Breakfast is served until 11h00, and six options are offered, including salmon and scrambled eggs (R66); Challah  (a special ceremonial Jewish Bread) French Toast (R52); and Latke Benedict with poached eggs and hollandaise sauce, reasonably priced at R52. A total of eleven bagel options are offered, costing from R38 for  ‘smooshed’ avocado, as well as the chopped liver; to R68 for the California, consisting of smoked salmon, wasabi cream cheese, avocado, pickled ginger, and soya 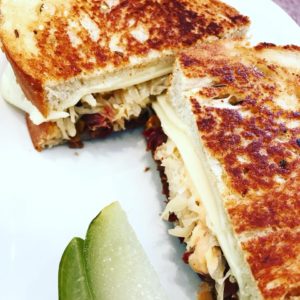 dressing. Other bagel toppings include lamb, vegetables, and smoked turkey. Three sandwich options are available, being hot pastrami on rye (R84), The Rachel (with smoked turkey) at R82; and The Reuben, with pastrami, on rye toast, Swiss cheese, sauerkraut, and Russian dressing, served with gherkins (R94). A patron at a neighboring table allowed me to photograph his Reuben sandwich. Two Beef Hot Dog options are available, the sausages made with beef only, and served in a pretzel roll, as a Classic (R36), or as a Reuben (R46). Other soups and salads are offered, and one can add extra ingredients to the salads, with a listing of prices per topping. ‘Noshes’ offered are salmon latkes (R68), mushroom latkes (R54), and chopped liver (R38). Sides cost R20.

I had noticed that latkes (made with potatoes) were offered as a dessert, served with apple sauce, 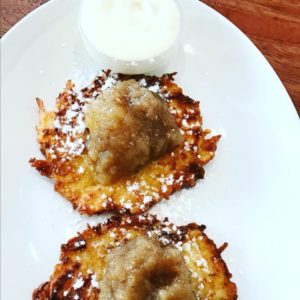 and  sour cream (R40), and it was total nostalgia eating one each, sharing the dish with Katie. My mother made the equivalent dish, but without the sour cream, which we called Kartoffelpuffer. Katie had ordered the Nutella Rugelach (R10), but it was not available yesterday. Other Sweets are blintzes (rolled pancake with cheese and fruit compote), at R42; New York cheese cake (R42 per slice); and Hamantaschan, a lemon and poppy seed shortbread biscuit (R10).

Kleinsky’s is licensed, offering spirits; craft and mainstream beers; as well as wines, including Spier and ‘Warick’ (sic) white and red wines, costing R40 a glass and R160 a bottle.

The service was excellent, a waiter handling the beverage orders, and Adam personally taking the food orders. The restaurant had been open for three weeks, and ran smoothly, other than the dishes which were out of stock. There is no external branding yet, and I had to use my Google Maps app to find Kleinsky’s, which is nearest to the Groote Kerk.

I do not make any income from my Blog, and therefore can never be compromised in a Review or story. I would not charge for any interaction with a restaurant, wine estate, or other supplier. I Instagram most of my photographs and use these in my posts. I Tweet and Facebook links to my Blogposts after publication.