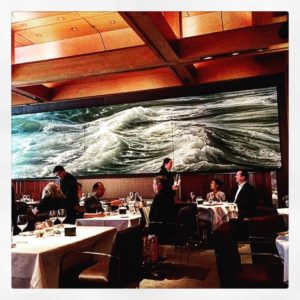 I rarely pre-read reviews, wanting to form my own opinion of a restaurant. In New York I need to know where I am going, with various subway options, so I have had to at least open the restaurant website, to check the address. For a number of my foodie friends who have been lucky to have eaten in New York, Le Bernardin appears their favorite, compared to the restaurants I have been to already. I was warned about its Frenchness, being more stiff and reserved, and more formal. The restaurant is named after a song in honour of Saint Bernard, chanted by monks, to thank him for looking after their fishermen.

I found the restaurant building with some assistance from friendly New 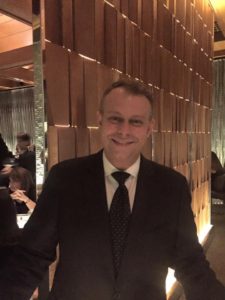 Yorkers, with understated branding on the exterior, with a revolving door entrance with no branding. Inside is quite dark, by contrast, and one steps into a bar/reception area, with a simple table manned by Maitre’d Tomislav Dzelalija, Croatian-born but who grew up in Cologne, and speaks fluent German. He has worked at Le Bernardin for nine years. We quickly switched to German, loosening the French feel immediatly, especially as he was super friendly, and smiles a lot. He stands in front of a partial room divider, created from teak wood slats, to give the dining section some privacy. He took me to my table, and I worried about the lighting immediately, with one spotlight from above on the high teak ceiling. I was able to take most of the photographs from my right hand corner. I realized that running to the kitchen to photograph there would not be on at this restaurant, so did not even ask for it. My table was the last before the way into/from the kitchen, and the thirty or so staff walked past me in continuous motion, I becoming aware of this when I tried to photograph something directly opposite me, and I struggled to get a photograph without a (moving) staff member in it. 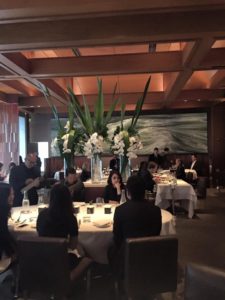 La Bernardin is one very large room, divided by the wood ‘curtain’, and then once more inside the dining section, with a table on which were three very large glass vases with long leaves and white orchids. Everything is muted in colour, a brown wall-to-wall carpet, beautiful classic brown leather chairs and stainless steel armrests, brown leather banquettes all along the length of the restaurant, and many tables with white table cloths, to seat 90 diners.

The restaurant is simply dominated by an oil painting ‘Deep Water No 1’ of 2010 by Ran Ortner, covering the whole back wall at the end of the restaurant. It is the only aspect of colour in the room, other than the white orchids, which were close to my table. The painting reflected the seafood focus of the restaurant. I could not stop looking at it. This was picked up in a soft blind, covering the big windows to the street, in a light blue, and its wavy ‘spine’.

Waiters wear black pants and a tunic, with a crisp white napkin over their arm, only male waiters seen on the floor. Sommeliers were female, with their silver tastevin. I had asked if I could see the head sommelier, and Austrian Aldo Sohm came to say hello, to answer my question about why there are no South African wines on their 60-page list. He was charming, saying that there are barely any Austrian wines on the list, and that the restaurant is French, and hence the wine list is predominantly French. The winelist is influenced by Chef Eric’s menus. He mentioned that he has been invited to visit our country by Paul Cluver, as a thank you for carrying their wines in the past, and he might do so next year.

The tables are covered with a textured table cloth, a white side plate, a brown under plate, a wine glass, German cutlery is by Robbe & Berking, with a square black ceramic holder with a white crysthanthenum. The plates each have a rim with a water droplet effect, again tying in with the marine theme of the restaurant. It was lovely having a fish knife served with almost each course, and one would have expected nothing less! As at Eleven Madison Park, my serviette was replaced with a new one each time I left the table.

I observed action at the (empty) table next to me, in anticipation of guests arriving. All the chairs and banquette seats were wiped again, and the positioning of the items on the table rechecked. For a table with Asian guests a small side table was brought to the table, for a lady’s handbag. 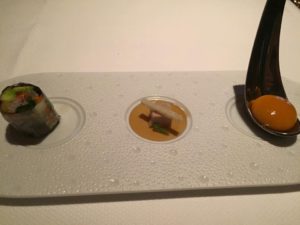 Before the menu was explained to me, a triple Amuse Bouche was brought to the table: an avocado vegetable roll, wrapped in rice flour, with a strong mint taste; served on a thin slice of cucumber; foie gras plated on a dashi seaweed jelly; and a sphere of lobster and tarragon Bouillabaise, which I was recommended to eat in one go. 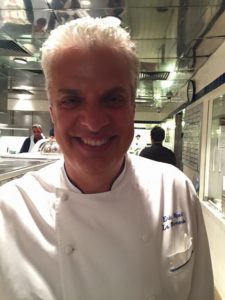 Renaldo Riera then beckoned me to the kitchen, to meet Chef Eric Ripert! He graciously came to me from behind the pass, shook my hand, posed for the photograph, and even suggested one of the two of us.  My knees were shaking, mainly because he was the only chef/co-owner (with Eric Meggee), who was in the restaurant, of the three restaurants which I had visited up to that point in New York. I met his assistant Chef Chris Müller too.

Renaldo took me back to the table, and explained the three menu options to me, beautifully presented in a light brown A4 leather holder:

#  Four course Prix Fixe menu, with generous options of one dish each from an almost raw, a barely touched, a lightly cooked, and dessert sections, at the cost of $147 per head. Wine ordered costs extra.

One of the menu pages emphasised: ‘Le Bernardin is committed to purchasing and serving sourced seafood without compromising the future of our oceans’!

My main waiter was Limann, with the most beautiful English with a French accent all the way through. My surname has never sounded so beautifûl to me, and I wished I could sit there the whole night, waiting for him to say it again and again! He looked like Seal, and I wished he would burst into song too, but that was completely ridiculous! I had struggled with the American English at the two previous restaurants, but Limann’s French English was understandable, and he spelt where he needed to. 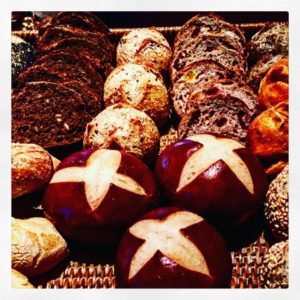 A waiter brought the bread basket with ten options, with lightly salted butter from ‘upstate’: rosemary and olive focaccia, French Baguette, pretzel roll, sesame and basil roll, tomato, turmeric and fennel brioche, buckwheat bread slice, raisin, walnut, and cranberry bread, quinoa and flaxseed slice, and a poppyseed roll. I chose the latter, and requested salt, which was a silver grinder by Peugeot. I hadn’t used all the butter, but the dish was removed and a fresh one brought to the table, without asking.

From then onwards I felt as if I was in a movie, and that I had been told that ‘your wish is our command’! I requested nothing (other than the pic with the chef), yet things just happened, the copy of the menu I had requested coming to the table with a copy of the 2016 Zagat New York City Restaurants guide. Soon thereafter Chef Eric sent the Michelin New York City Michelin Guide 2016 Restaurants to the table. ‘Christmas’ was starting to happen, and lots more was to come. 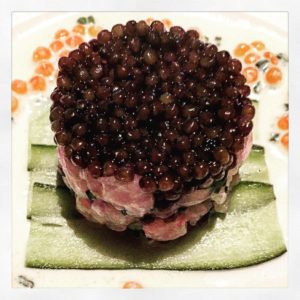 King Fish-Osetra Caviar tartare was served with a smoked Crème fraîche emulsion and smoked sea trout roe and chives, accompanied by a 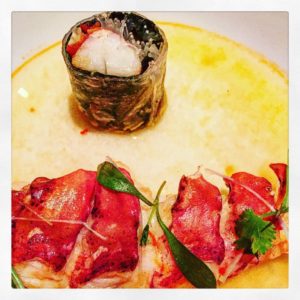 petite toast stand with two slices of Melba toast. The pairing was with a Japanese sake.

The second course was lacquered lobster tail, served with a herb spring roll, filled with mint and basil, lobster knuckle, and cellophane noodles. To the dish had been added a refreshing shrimp and lemongrass consommé,  and 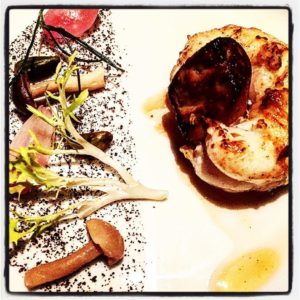 mirin (Japanese rice wine vinegar), and it was paired with Krug NV.

The third course was seared Scottish langoustine on which was placed foie gras, with pickled shimeji mushrooms, pickled red onion, truffle powder, salad frisée salad, pistachio, and a shrimp stock Sauce Perigord. The sauce was made from shrimp stock, infused with fresh tomato, and Madeira wine, giving it a beautiful red/orange broth colour. This 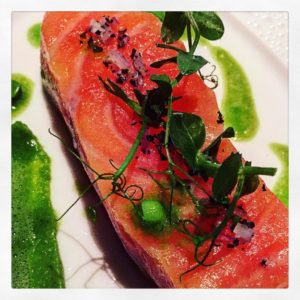 course was paired with a New York Terrassen Riesling 2013 by Thomas Pastuszak. I have used the photograph without the addition of the sauce, to reflect the beauty of the fine plating.

A beautiful dish of ‘barely cooked’ organic salmon cooked ‘unilaterally’ (i.e. on one side only) was presented with Fava beans (the third restaurant in a row to serve these), a pea shoot, pea purée, and baby peas, to which was added a mint-Tarragon 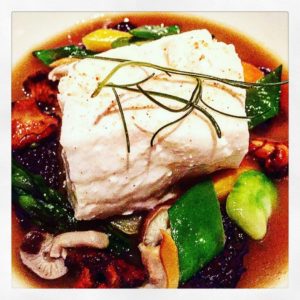 emulsion, and which was paired with a Napa Chardonnay 2014 by Watson Ranch. This was the best dish of all for me.

I discovered the enjoyment of Halibut at Le Bernardin, a firm large white meat fish, which was poached, and served with Manila clams, and served in a wild 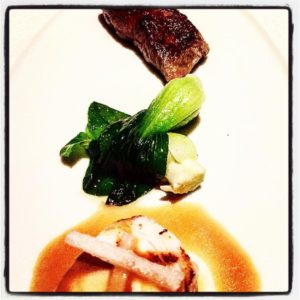 mushroom (morels and chanterelles) casserole. It was paired with Wind Gap Pinot Noir 2014 from California.

Course number six was a fish and meat combination one. The fish was grilled Escolar, a white tuna, over which had been placed fresh kimchi Asian Pear and a soy-citrus emulsion; bok choy; and Japanese seared Wagyu beef, which was somewhat 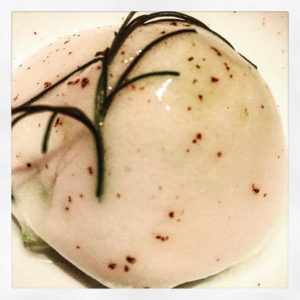 difficult to cut. This dish was paired with a Francesco Rinaldi Barolo 2011 from Piemonte.

A pre-dessert of Cucumber Pisco Sour was served, giving this dish a Peruvian flair, to which had been added diced cucumber, Asian pear, Pisco foam, and grated Black Persian lime.  It 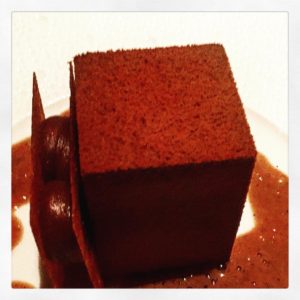 was a perfect summer dish, served ice cold! It was paired with a Hungarian wine Tokaji 2008.

The menu informed that the last course was a Coffee Caramel Cremeux, with a roasted almond mousse, a milk chocolate box, a caramel coffee millefeuille, and a 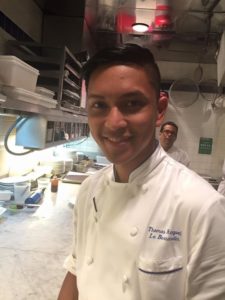 But a second dessert was brought to the table, sent from the kitchen by Pastry Chef Thomas Raquel, whom I was invited to meet in the kitchen too. The dessert came from the Prefixe 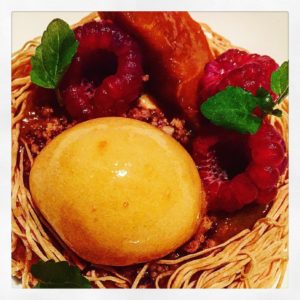 menu, which was a nest made of shredded kataifi, with caramel honey Cremeux, roasted apricot, raspberries, and apricot sorbet.

Thinking that this was the end of the dinner, an ‘egg’ dish arrived, served inside an egg shell, The Egg filled with chocolate custard Crème, caramel foam, maple syrup, and Maldon sea salt.

But it was not yet the end! The final treat was a plate with five friandise: white chocolate 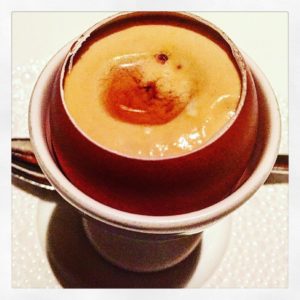 and strawberry, pistachio macaron, cherry financier, lichi fruit jelly, and a chocolate tartlet topped with meringue. I couldn’t finish them all, so I asked Limann if he had something to take them home with. Yes, he said, and he returned with a box full of a fresh supply! 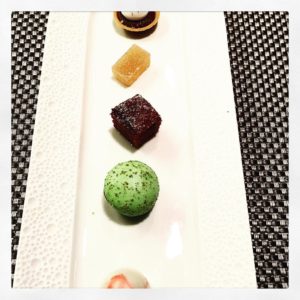 La Bernardin is a disciplined French seafood restaurant which serves superbly flavoured dishes, cleverly thought through, and which are made perfect by the careful choice of thin sauces added to each dish. Everything ran like clockwork, I felt super-spoilt, and did not want the evening to end. Only one server stretched in front of me once when it came to placing cutlery. There was no other criticism at all over the course of the four hour dinner. Limann brought a second cappuccino, but did not charge for it, and he offered me his Le Bernardin pen as a souvenir! I will treasure it as a reminder of a perfect evening in New York!