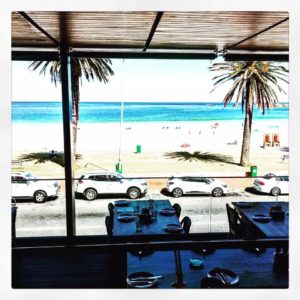 About a month ago I bumped into the GM of the new Melissa’s Mantra Café in Camps Bay, which has a magnificent location above The 41 restaurant, overlooking the beautiful Camps Bay beach. The restaurant opened on Tuesday, and I went to try it out, knowing that its GM Ian Smith would be there. The new Melissa’s outlet connects original founder Melissa van Hoogstraaten to her Camps Bay origin.

Ian had recommended that I come for breakfast, and I was completely surprised to see Jack Quinlan in the restaurant, enjoying breakfast too, and the view onto Camps Bay beach. Jack is the owner of the building, which he bought from the owner of Tuscany 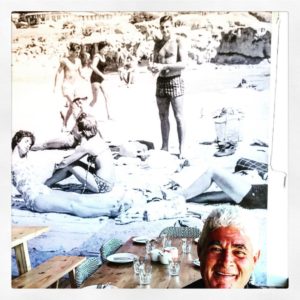 Beach about four years ago, and needed to wait a considerable time for the building approvals, before the building work could commence, taking down the building, and starting it from scratch. It has become a unique (for Camps Bay) modern glass-encased building on two floors, with Melissa’s Mantra Café upstairs, and The 41 restaurant below. Jack and I were fellow part-time MBA students at Wits Business School, and he is a property developer, as well as an acquisition and mergers consultant, traveling to 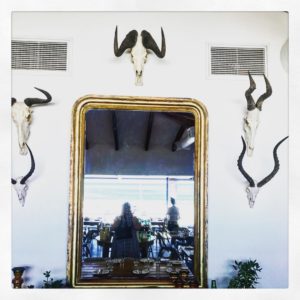 As Jack and I had not seen each other for years, I joined him at his table, and it was interesting to hear from him what it takes to be a landlord. He told me what the requirements were for his two building tenants, seeking continuity of business operation, as well as owner involvement in the running of the businesses. At Melissa’s he deals with Mark van Hoogstraaten. He told me that he had insisted that the roof beams not be painted white inside Merlissa’s. He noted a bulb was not working, and he was on to the builder straight away to have it replaced. He told me that the entrance alongside The 41 was made four times as wide than is usual, and made double volume, to attract 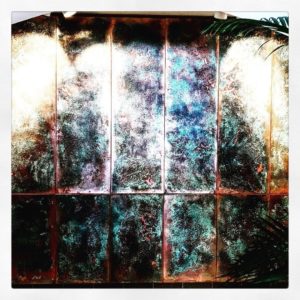 customers up the steps to Melissa’s. I loved the look of the copper cladding on the walls at the entrance to the kitchen and to the cloakrooms. Melissa’s is 420m², while The 41 is somewhat smaller in size, at 380m².

Jack sat in front of a black and white wall poster of Camps Bay beach in the ‘Sixties, we heard from Melissa’s mother Elaine Allen, who was very excited about the restaurant opening, having brought friends. She ran an after-care service at the Camps Bay Preparatory School, which my son attended, and she came to say hello. She is the bikini girl in the poster, she told us proudly. She lived in Camps Bay for most of her life, and she told us that her husband’s ashes were strewn near Whale Rock in Camps Bay, giving her and Melissa a special connection to the new store in Camps Bay. 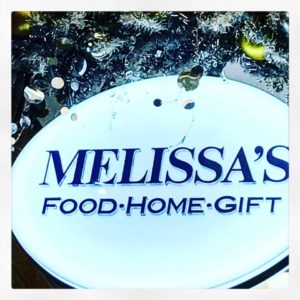 When one has climbed the steps to enter Melissa’s, one enters the scaled down 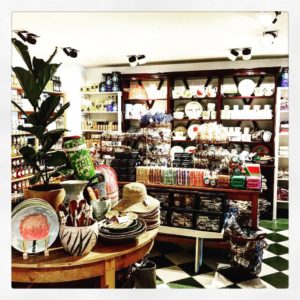 shop, which sells packaged and branded Melissa’s products, similar to those in the other outlets. There are jams, bags, scarves, crockery, but there is no fridge for perishables. Melissa’s has a new pay-off line in its stores (‘Food Home Gift‘). Signage was due to be put up on Tuesday afternoon, Jack being onto this with Ian. I was seeking Melissa’s mince pies, the best I have ever eaten, but they only sell scones and muffins, with cakes inside the restaurant, on a separate table. The cake selection was small compared to the Kloof Street branch, which I know best, and I was impressed with the unusual decoration (with pineapple slices) of the carrot cake (R39), and of the gluten-free 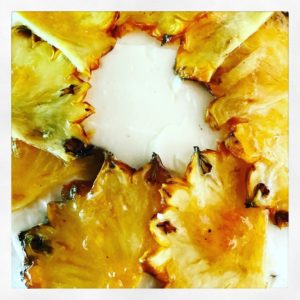 The interior is on two levels, one stepping down to the seating closest to the sliding windows. Floors are wooden. Chairs are woven cane, in black and white, characteristic of Melissa’s outlets. There are no hand-written blackboards with the Melissa’s philosophy written on them, as one 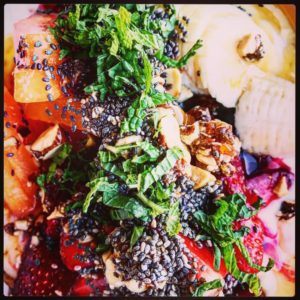 sees in the stores, but then covered in bags! Refreshing is to see the paintings on the length of one wall, being mainly beach scenes, and one very specific Camps Bay one.  The art is for sale. Near the kitchen is a large gold frame mirror, which is surrounded with buck horns, a very unusual decor touch.

The tables have salt and pepper grinders, Nova cutlery, and white crockery.

I ordered a dry cappuccino and water, and it arrived correctly made. Jack had raved about the Breakfast Fruit Bowl, so I ordered one too, an attractive tasty and 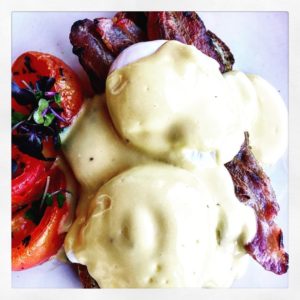 Jack ordered Eggs Benedict with bacon (R72), while I ordered spinach and scrambled egg, not an item on the menu. I received a miniscule portion of spinach, so the waitress Linda went back to the kitchen to find 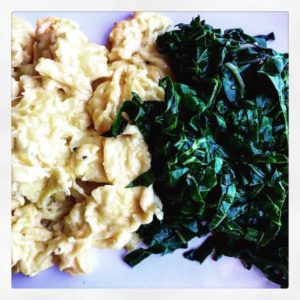 some more. There is a breakfast menu, printed on an A4 sheet, as well as a combination lunch and dinner one.  For the first time a Melissa’s is open for cocktails and dinner.

The breakfast menu offers two muffin varieties (R26/R36), croissants with preserves (R44), and scones with cheeses, preserves, and cream (R44). Additional ‘Classics’ items are avocado sourdough (R55), to which poached egg, salmon trout, or bacon can be added, at an additional cost per item. Smoked salmon hash browns cost R 68, the same price which is charged for a traditional English breakfast. Omelettes cost R46, with an additional charge for fillings. Indulgent breakfast cocktails can be ordered (R45/R55), the outlet’s liquor licence having been approved. The Menu informs that breakfast is served until midday.

The drinks menu is bound in a booklet, and inside it is the visual of the Camps Bay beach poster. MCCs cost R195 for Krone Borealis Brut (R195) and Steenberg 1682 Brut (R285). Champagnes served are Veuve Clicquot Brut (R950), Bollinger Cuvee Brut (R1200), and Louis Roederer Brut (R1450). Only two white and red wines each are offered by the glass. Surprising is that none of the white and red wines have vintage details. Cocktail options are plentiful, none costing more than R65. A 1l jug of Sangria costs R165. 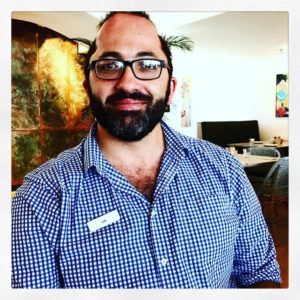 I had to speak to Ian to sort out my bill, due to an error made by the waitress, caused by my special breakfast order, Ian advising me that if I ever change an order in relation to what is specified on the menu, I should arrange this via the manager. I also gave him feedback about my experience during the two hours at Melissa’s Mantra Café, my water glass not being filled up, and I received a flat white instead of a second dry cappuccino, due to a change in waitress when I moved to join Jack at his table. I have complete faith in Ian, in that he has been a Melissa’s area manager for a number of years. He has proven to be very responsive manager, and has welcomed my feedback re the Melissa’s experience over the years, never shying away in fixing things immediately.

The bill says Melissa’s, so this is likely to cause some confusion, even more so as the credit card slip also says Melissa’s. The traffic police are lethal in ticketing in Camps Bay, so it is advised to take an Uber. Prices at Melissa’s Mantra Café are surprisingly reasonable, one not paying a premium for the location and fabulous view onto the pristine Camps Bay beach.