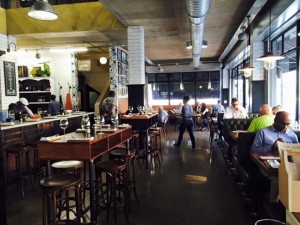 On my third day in the Durban area I had almost given up the hope of finding a near-perfect foodie place in the city. My heart started beating with excitement when I entered Old Town Italy in Umhlanga, which opened  three months ago, to such an extent that I Tweeted with a hashtag that it is a #CapeTownMustHave. It is a Food Destination in Durban!

I sat down at a table in the eating section, and a waitress took my cappuccino order, and brought a menu. She was not able to answer all my questions regarding the owners and chef, so called her mana 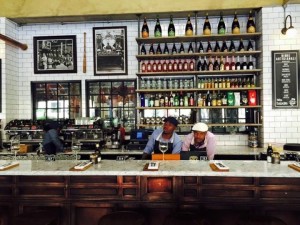 ger Julie Dancaster to chat to me, and to take my order.  I was very aware that it was close to 16h00, as The Oyster Box driver and reception staff told me that their kitchen closes at that time, even though the outlet only closes at 19h00.

Julie told me that the owners are Renzo Scribante (‘the brains behind the venture’), Clifford Barratt (the Head Chef at Unilever for 22 years), and Chris Wright. Renzo owns Remos restaurants, the first one having opened in Mount Edgecombe, and a second one is in Umhlangha too. The first Remos opened eight years ago, and focused on offering Italian-style quality fresh premium-quality ingredients.  They have created a pasta factory at Mount Edgecombe too, making their own pasta under the Rummo brand name. It is used at both Remos restaurants, and stocked at Old Town Italy. 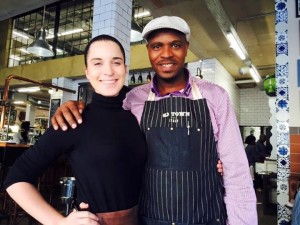 Julie enthused about her fabulous job, employers,  and work location, the staff feeling part of ‘familia el tutte‘. Every staff member has been given an opportunity of employment and growth which he/she did not have before. They have been given a sense of purpose, as well as pride in themselves. Julie is a student of Marketing and Management, and worked as a hostess at Remos previously. She introduced me to Selby, their Head Barrista, known as the ‘Black Mamba’ amongst the staff!  The dry cappuccino was perfectly made, and served in a branded 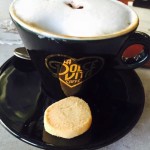 cup of their house brand La Dolce Vita (in Superior, Organic, Decaf and Lusso), being sold in the Deli, and used for the making of their coffees at Old Town Italy, and in their Remos restaurants. They import Ethiopian beans, and roast them locally.

They had opened with Chef Nicky Burroughs, but he had fallen ill, and Chef Damian Connolly from Ireland heads up the kitchen now.  He was not in when I was there. Julie told me that they took a chance in creating Old Town Italy, making a safe destination for their customers, all wishing them to escape their own lives for a while. They are going back to the past, where the shopper develops a relationship with the butcher, baker, cheese supplier, fruit and vegetable shop, and 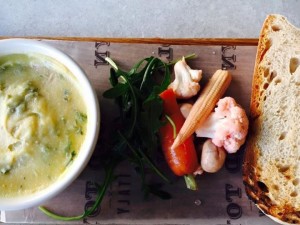 more. Julie helped me with suggestions for my order, and I could not resist the delicious chicken liver pâté, which was served with toast (R45). They also assembled a platter of Di San Daniele ham, sourced from  a supplier ‘where the pigs are looked after like children’, 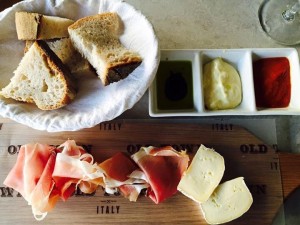 While the food was being prepared, I walked around  the Deli section. My first stop was at the Gelateria, and they use Fabri Italian ice cream, to which they add ingredients.  I had to have 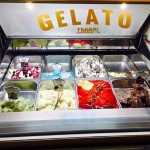 an Amarena cherry scoop. I then saw a smallish vegetable and fruit fridge, with potatoes, sweet potatoes, aubergine, paprikas, apples, carrots, tomatoes, avocados, mushrooms, baby marrow, grapes, and more.  Given the total size of the outlet, this section seems small and limited in its offering!

There are shelves of ready-made produce, including the brands of 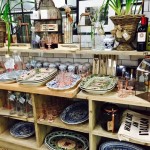 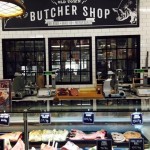 Along the walls there are counters, selling a collection of items, being cheeses, a large butchery section (The Old Town Butcher Shop), as well as one which sells charcuterie (such as salamis, hams, and chorizo), ready-made salads (such as cauliflower, pasta, Gorgonzola and orange), and a vast selection of baked and other sweet treats (such as lemon tarts, tiramisu, panna cotta, 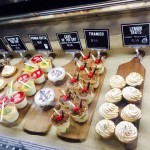 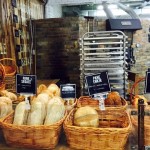 The menu has a large antipasto section, designed to utilize produce from the Deli sections. Menu sections focus on peperoni, melanzane, mozzarella, carpaccio, bruschetta, and ‘fritti‘, offering various styles of preparation. Flat bread sandwiches cost R60-R80, while a large selection of the Deli charcuterie and cheese items is offered in price palatable portions, most costing R25 each, without the weight or portion size specified! Pasta dishes are limited in number (R80 – R120), as are salads (R40-R80). The Roasts and grills section offers steaks (R120-R140),  chicken, calamari, burgers (R95), meatballs, and sausages, peaking at R175 for the salmon. There is a children’s menu, all bottled waters are Italian, and the two desserts cost R45. Chefs Specials are also offered.

Julie found Chris Wright, and asked him to chat to me. He told me that sadly the expansion of Old Town Italy to Cape Town is four years away, and that an Old Town Italy, a Remos, and an Eately (which they will represent in our country) will open in Johannesburg  and Pretoria first. They have looked for sites in Cape Town, but have not yet found the ideal one. Chris himself is a 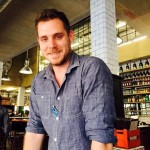 trained chef, having studied at the Christina Martin Culinary School, was the personal chef of Roald Dahl’s widow, and managed restaurants and a hotel in Durban. 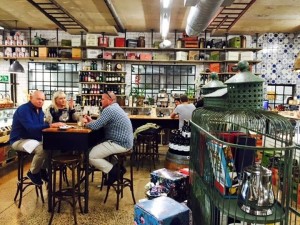 I cannot wait for Old Town Italy to open in Cape Town, as there is nothing like it in our city!  Eat Out has nominated Old Town Italy for the Boschendal Style Awards, an odd choice as less than a third of the space is dedicated to a sit-down eatery. It would be ideal for a Best Italian award however! 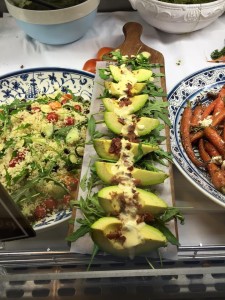 their delicious chicken liver pâté to take back to Cape Town. The avocado salad topped with crispy bacon bits was delicious! The Eatery was much fuller, and the (non-Italian) music very much louder, almost unbearably so. I noticed that every beverage stocked, alcoholic or soft, is imported from Italy. I noted today that not all the staff speak an understandable English, or seem to accurately understand one’s English. I was irritated that I had to pay for the Deli items separately to the coffee and mushroom risotto, even though they used the same credit card machine for the two payments! It seemed to have something 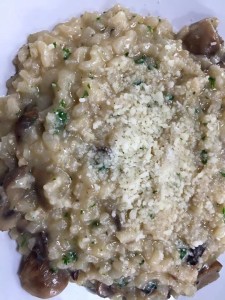 to do with the tip, as the manager/waiter Dylan Rosser, who had not paid any attention to me in the hour during which I was in their Eatery, made a cheeky remark which appeared to support the tip issue!