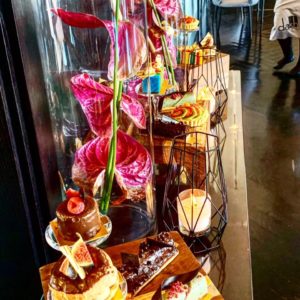 Dash Restaurant at the Queen Victoria Hotel used to be my favorite restaurant, at a time when Chef Oliver Cattermole headed up the kitchen. A succession of chefs since Chef Oliver left made it harder for me to want to return. A chance experience of its French Pâtisserie selection yesterday afternoon shocked me, in that the restaurant manager and waitresses were so incompetent in their service, or rather, lack of.

I saw the lovely pâtisserie items displayed in the Dash lounge/bar, and asked the waitresses for a list of the items, as well as a Tea Menu. I had to repeat my request for the Tea Menu five times until I saw a list of Tea options at the bottom of a Breakfast Menu, a shock to be shown this at 14h30.

I received no reply to my request of the names and descriptions of the French Pâtisserie items, 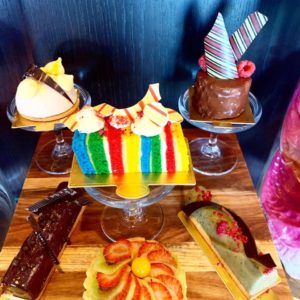 three staff furiously scratching in a cupboard to find such a list. As I was under time pressure, I became increasingly irate in observing this farce, three pastry chefs subsequently being rolled out from the kitchen to explain each of the pastry items to me. I had arrived without my notebook or pen, so that option did not work for me, there being at least ten different pastry items. When the staff had finally found the French Pâtisserie menu, I asked that it be photocopied, so that I could use the list to identify each item in my photographs. This took another ten minutes, because another staff member appeared to also be photocopying in the office. I kept returning to the front office, complaining to the Duty Manager Lynette Bouwer about the poor service. She didn’t think it important to reply, jumping up each time and instructing staff to do this 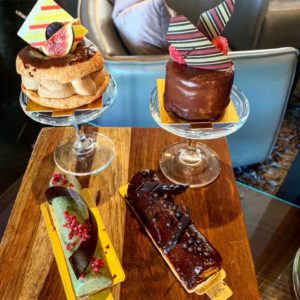 It was Kim McNulty, the Restaurant Manager, who did the photocopying, and who witnessed most of the staff scrambling for the menus, taking no control of the diabolical service. I asked how much the tea costs, as it was not priced on the Breakfast Menu, and Kim told me it is R24. When my bill arrived, it was priced at R27. Kim admitted to having made an error, the price of the tea having increased recently! I was refunded the R3 overcharge relative to the quoted price.

As I was so short of time due to the Menu hunts, I only had the tea, and promised to return after an appointment to try one of the pastry items, the pastry items remaining on display in the Dash lounge/bar until 18h00, set up at 14h00. The tea order was efficiently taken the second time round, on my return, and from the French Pâtisserie Menu and descriptions I chose the Chocolate Mousse, mixed berry compote, and almond Jaconde, 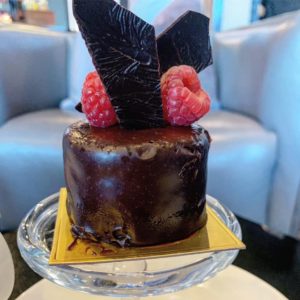 with chocolate shards, and topped with raspberries, good value at R45 I thought.

Not only was the service shockingly bad, but the photocopy quality was an eyesore when I typed all the pastries in the Blogpost, and the pastry item descriptions were too complex and technical in the terminology used. On arrival the service issues commenced already, the parking advisor allowing me to park in one of the hotel bays in return for a little something, he begged! 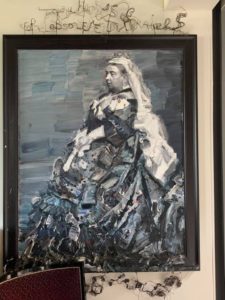 There was no verbal apology nor monetary compensation from the restaurant for all the poor service drama I experienced at Dash Restaurant & Bar. An inexpensive tea and treat, but not worthwhile in terms of the exceptionally poor service in a 5 star hotel! What would the Queen have thought of this?!