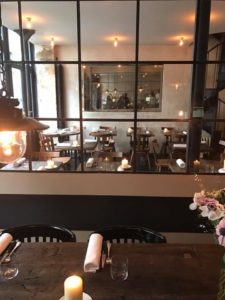 Yesterday I completed my Gourmet Tour of France, eating at the 50th restaurant on the World’s 50 Best Restaurant list, being Septime in Paris. It has one Michelin star, and has held it for the past four years. Despite being understated and hidden in its location, it offers world-class cuisine served by an enthusiastic team.

I was dropped off by a taxi outside the door, and if the driver had not shown me the blue door, 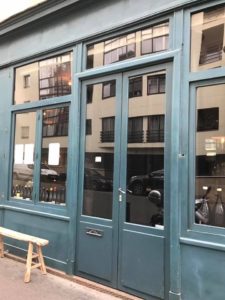 I would not have found the restaurant, it having no branding on the building, only a business card on the glass door revealing where the restaurant is. One steps through a black curtain into a reception room which has a bar counter, an invoicing and payment section, and a large table for bigger groups, or to share. I was the first to arrive, so was able to photograph the interior before the other patrons arrived, the restaurant being able to seat up to 45 patrons. A wall of glass panels separates the entrance room from the rest of the restaurant, but still adds light and size to the restaurant in creating the openness.

I was giving the choice of a table in a darker section of the restaurant or closest to the windows facing the street, so the latter option was ideal for photography purposes. The tables are very close to each other, so much so that Chef Maximo Tognu from Sucre 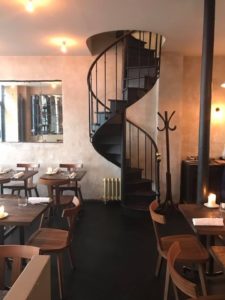 restaurant in Buenos Aires and I could have a conversation about the meal at Septime, and the one we had at L’Arpège (on separate days). I loved the metal spiral staircase in the room, leading up to a mezzanine level in which the staff can relax, I was told. Wooden top tables in a rough finish have no table cloths, only decked with a lit candle, a beautiful Riedel water glass, a material napkin, and a knife by Legonome, and the remaining cutlery by Arthur Krupp. Chairs are wooden too. The menu was on the table already, attached to a metal board, in A5 size, stamped with yesterday’s date, and identified as the Lunch menu. The menu was in French only, despite  a large number of the patrons being from other countries. A wine list in A4 was similarly attached to a metal board with a clip, 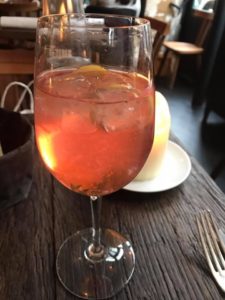 but it did not contain any South African wines.

The waitress offered me a bottle of sparkling water, Septime branded, much more reasonably priced for 750ml at €4,50. Senior waiter Benoit offered me an infusion of apple, blood orange, thyme, zest, and minute lemon bergamot. I did not really understand what he was offering me, but it was a non-alcoholic drink, with a taste of bitters, and not terribly exciting. Having burnt my fingers at L’Arpège with their very expensive apple juice, I asked for the price, as it is not proactively mentioned. It was €3,50. For the first time I 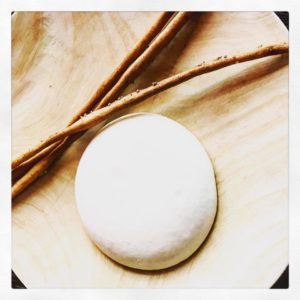 heard a patron ordering tap water, which was brought to his table in a bottle.

The first course was brought to the table almost immediately, an unusual dish of home-made grissini sticks with cottage cheese, slightly warm. It looked so simple, but beautiful on a light wooden plate. Benoit came to my table, to explain the menu, calling it a Surprise one too, as I had eaten at L’Arpége the day before. The menu stated that four courses would be served, all undisclosed, but that one course would be a choice of fish or meat, which were both described on the menu. Being in French, Benoit translated the dish for me, in being whiting, served with spinach, new garlic velouté, green vegetables, and a ‘chicken sauce’, an interesting sauce for a fish dish. The cost of 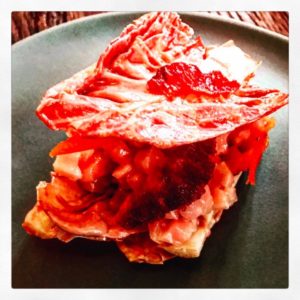 the 4-course menu was €42, but in reality it had six courses.

Asking about the sourcing of ingredients, I was told that fresh ingredients are supplied by ‘small specialist biological producers’.

Soon thereafter an unusual looking pink salad was served, all in pink, perhaps apt for Valentine’s Day last week. Pink lettuce leaves, veal tartare, mandarin oil, cream with juniper and red wine, semi-hydrated blood oranges slices, and slices of dried fish roll Bottarga (completely misspelt by the waitress!) from Sicily were the ingredients of the romantic salad. With this course a 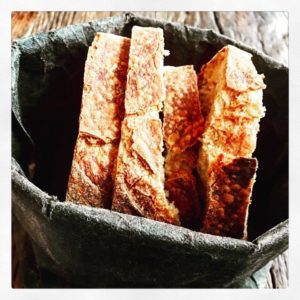 basket of bread slices was brought to the table, without an explanation, but on asking I was told by the waitress that it is bought in, disappointing to hear for a restaurant of this caliber. Unusual and inconvenient was not having a sideplate for the bread.

As the very tiny kitchen is open-plan, I could observe the chefs at work, and Chef and co-owner Bertrand Grebaut had his back to the restaurant, doing the hands-on plating of the restaurant dishes.  He allowed me to 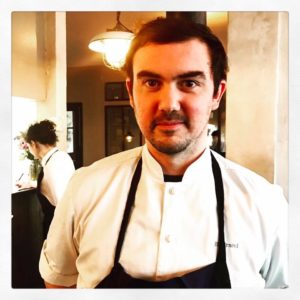 photograph him, luckily before the restaurant got busy. I had read that Chef  Bertrand had previously worked for Chef Alain Passard, at L’Arpège, and many aspects of the two restaurants are similar, a strength and a weakness! The most unusual aspect of Septime is that there is no separation between chefs and waiters, or so it appears, as all staff wear a white shirt or chefs jacket, black pants, and a blue-purple apron. At first I thought the chefs were bringing the food to the table, but they were in fact the waiters. One will soon identify which of the staff are the chefs, as they all seem to be on a beard-growing drive! Unlike Chef Alain Passard, Chef Bertrand does not connect with his patrons, in walking the restaurant floor and greeting his patrons.

On my trip eating at the three World’s 50 Best Restaurants in France, it was good to see that the restaurants on this prestigious list do not charge upfront for a booking, as does our The Test Kitchen (at number 22 on the World’s 50 Best Restaurant list). It was possible to book a table at each of the three restaurants in France within three weeks before my departure, Septime being the only complicated one, in that one cannot book longer than 21 days in advance, so one must do the reservation online (but it is all in French) or call on the 21st day to ensure that one gets a table. Judging by the restaurant yesterday, the booking system appears to work. My reservation was confirmed telephonically 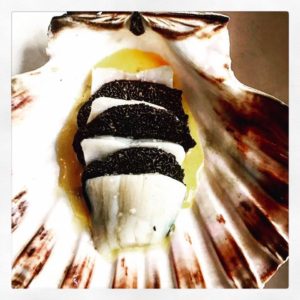 One of the two highlights of the lunch was a dish of scallops, served in the shell of a scallop, with black truffle, and egg yolk, poached in butter. The shell it was served in was held steady inside a bowl with coarse sea salt. The 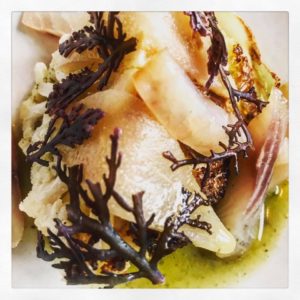 scallop was butter soft, unlike the tougher one at L’Arpège the day before.

Course number four was roasted cauliflower, not exciting in its presentation. It was served with a butter and seaweed sauce, was topped with seaweed, and additional ingredients were salted pear, and smoked Fera, a whitefish from Lake Geneva. The fish had 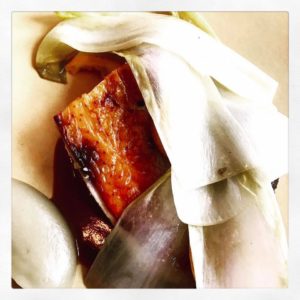 Course five was smoked chicken roasted on the bone, served with a Jerusalem artichoke purée, small surprise slices of kumquat giving the dish a fresh zing, and covered with endive leaves, with a reduction of Savagnin wine and walnut sauce. The chicken was beautifully prepared, very soft. The sauce was too salty for my taste, the waiter blaming it on the reduction, and stating that it gave the sauce a strong bold taste. 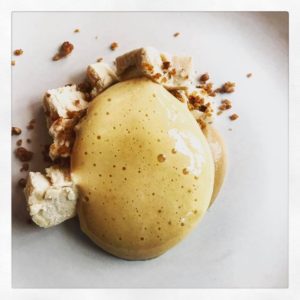 The dessert course was the last on the Lunch tasting menu, and was outstanding,  a cool refreshing combination of caramel semi-freddo, apple purée, buckwheat crumble (giving a good texture), and Sabayon prepared with honey and hay. The latter ingredient was also in a velouté dish at L’Arpège, in Chantilly cream. Other than being an unusual ingredient, it did not add to the taste or enjoyment of the dishes in both cases. The presentation did not do justice to the dish. I had two dry cappuccinos with the dessert.

A seventh course was offered prior to the dessert, 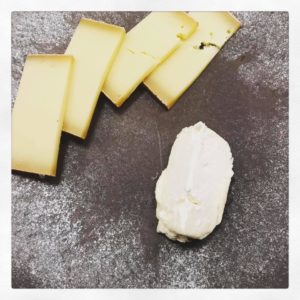 being two cheeses, a goat Chabichou and Tomme d’Abondance, charged at an extra €9, which I declined, but was allowed to photograph it.

Co-owner Theo Pourriat came to introduce himself, and told me that he and Chef Bertrand have been friends since school, and decided to open the restaurant together, despite Theo having no prior restaurant experience. As 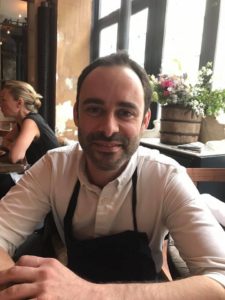 spaces have become available alongside Septime, they have taken leases to expand their collection of businesses to three. We spoke about the trend for chefs to open additional restaurants, as we are seeing in Cape Town, Theo telling me that this trend started in Paris ten years ago already.

Not having working wifi in the restaurant was not good, especially as the waitress told me that it is a regular problem. Some of the flowers in the unisex bathroom were dead, a no no, and reflected the lack of a female touch in a male-dominant environment, both amongst kitchen and the serving staff. The similarity of Septime with L’Arpège is not beneficial to Septime, as diners would expect something unique, and not a watered down version of the renowned L’Arpège.

Cleverly the cutlery for each new course is laid in the middle of the table, preventing the waiters from stretching across the patrons, as I had experienced at L’Arpége. Odd was seeing one of the waiters placing the used fork of my restaurant neighbour on the table, to be re-used for the next course, which luckily did not happen to my cutlery. I had to refill the water in my glass after the first pouring by the waitress!

Generally the staff were very friendly. I was surprised to hear from Theo that they had already found my Septime photographs on Instagram. Out of six courses, having three excellent ones (the chicken, despite its saltiness, the scallops, and Sabayon) can be improved upon. Service can definitely be improved too. Septime comes across as a baby sister restaurant to L’Arpège, not doing either of the restaurants any favor! It is time for Septime to sever the umbilical cord!