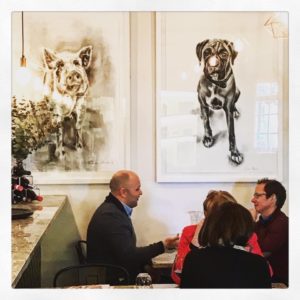 I had not been to Spek & Bone yet, Chef Bertus Basson’s fourth restaurant, on Dorp Street in Stellenbosch. Bertus Basson @ The Ritz Revolving Restaurant is still awaiting official opening in Sea Point. I was severely disappointed with my visit to Spek & Bone with my friend Jenny last week. What was Chef Bertus thinking in setting up such a crap restaurant, given that he is on the Eat Out Top 10 list?! The c-word appears a number of times below, so sensitive readers are welcome to opt out of reading the rest of the review! 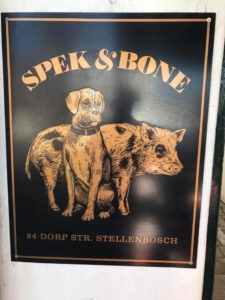 dog Bone. Mareli came to greet us, and I congratulated her on the birth of their son Theodore two months ago, added to their menagerie of a second dog and seven chickens, she told us. The restaurant is located behind Oom Samie se Winkel, a well-known tourist odd-shop next door to Melissas’s. One has to find the gateway to the restaurant, with low key branding, and one could walk past it if one didn’t know where to look for the entrance gate. The restaurant itself is not immediately visible, and one has to walk past the back section of Oom Samie. What we arrived at was a zipped up plastic curtained space, with some tables outside too, probably ideal for summer.

Manager Jacques came to greet us, and wanted to initially offer us a table at the entrance, but we chose an alternative table, a little more 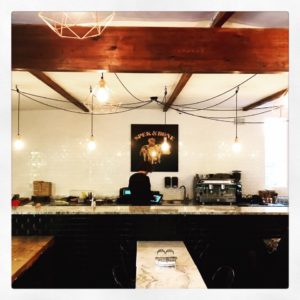 protected. I was shocked at the crap (apologies, not a word I have ever used in a review, but no other word describes what we saw and experienced at Spek & Bone) interior, with some trendy geometric rose gold light fittings, not adding much light to the interior, an open hatch from which one can look into the messy kitchen, and a long back wall with a Spek & Bone logo. A sidewall has a framed drawing each of Spek and Bone. Tables have marble tops, and there are bigger wood top tables, with a mix of chairs, some black metal, some wood with plastic seating straps, and some crap cheap and nasty wood-only ones. All other ‘walls’ are plastic. There is nothing on the table tops, no side plates, no cutlery, no napkins, no table cloth, no flowers, no salt or pepper grinders! Jacques told us to smoke in the street, if we were smokers, and gave vague directions to the bathrooms somewhere outside the restaurant. One overhead bathroom wall heater was switched on! A total of 55 diners can be seated inside and outside in summer, and 35 diners inside in winter.

My heart sank when Jacques brought the menu and winelist, a cheap A4 paper summary of the dishes offered, and the wines available to drink by the bottle, carafe, and the glass. The back of the ‘Food’ and ‘Wine’ pages explains that the relationship between the two pets Spek and Bone is an unusual one, and thus the restaurant hopes to surprise one with the unexpected (did they mean unexpectedly poor?!). There is reference to the oldest fruit-producing vine in Stellenbosch, but as we were sitting inside, we were not aware of it nor sitting under it, as implied in the introduction, which related to its relevance for a wine bar (I thought this is a restaurant?!).

No dietary requirements were checked during our time in the restaurant, but in fine print on the menu it stated that the restaurant tries to accommodate food allergies, but 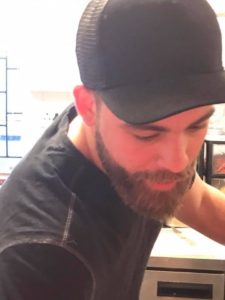 cannot meet all requests as the menu is small, seasonal, fresh, and subject to change. Onion, garlic, and salt are the base of their dishes, the menu informs, the first two ingredients not being my favorites at all. Whilst photographing I met Chef Kyle du Plooy in his kitchen, seemingly under pressure, with only one colleague in the kitchen.

Jacques told us that plates would be brought to the table as they are ready. Plates are small but they do not call them tapas, as they are a South African restaurant, and offer larger servings than Spanish tapas. Jacques also told us that wines could be ordered by carafe or bottle, and that we could share the carafes, but we declined the offer. We asked Jacques which the most popular dishes are, and he told us that it is the gnocchi, as 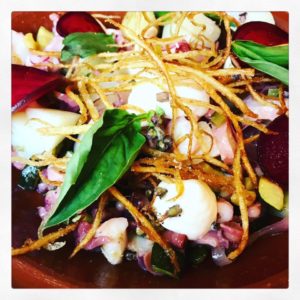 well as the home-made beef bangers, served with slaphakskeentjies (baby onions). Jenny and I shared the dishes, as one would tapas, and I wasn’t surprised that the white plates onto which we placed our helpings were cheap Continental China ones! We had to request a serving spoon per dish, so that we could help ourselves! Cutlery is Brazilian (what happened to Chef Bertus’ proudly South African?) Tramontina Inox!

Jenny selected the Octopus Salad ‘Provunçale‘ (sic), described by Jacques as having ‘Mediterranean flavours‘ (not sure that I tasted any of those). The octopus had been prepared sous vide for 24 hours, Jacques told us. The salad contained very little octopus, and was filled with salted potato crisps, a garlic emulsion, anchovy paste (which I didn’t taste), olive tapenade, onion, beetroot, charred courgette, potato, and fresh basil, charged at R95. 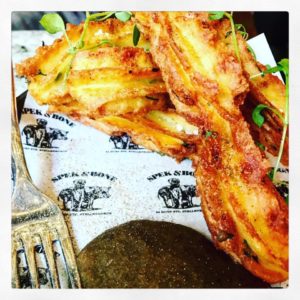 I ordered the herbed potato Churros, churros being a great favorite of mine, but usually made with flour. It was served on a wooden board, on top of branded Spek & Bone paper, with mushroom dust and what was described as ‘homemade mushroom ketchup‘. I could not help think that the brown sauce looked like what a dog with a runny tummy would produce. The dish was topped with chickweed, which is foraged around Stellenbosch, including the ‘Banhoek Pass’  –  did Jacques mean the Helshoogte Pass? (R65). My spontaneous reaction to the ‘ketchup’ shocked Jacques, never before having heard the sauce described in this manner. The Churros tasted good, but we 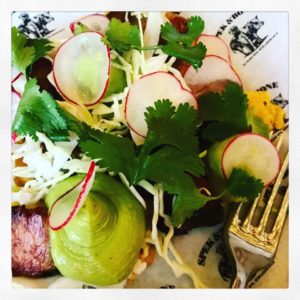 were very nervous about dipping them into the supposed ‘ketchup‘.

I also ordered the smoked pork belly, with an ‘organic‘ (not explained) maize ‘quesidilla‘ (incorrectly spelt, and making up the bulk of the dish), served with avocado purée, raw cabbage, radish, and coriander (R95). I think I counted three cubes of pork belly in total, pure fat! Some of the fat had dripped onto my dress, and Jacques brought me a warmed jammerlappie, which removed most of the stain, for which I was very grateful. 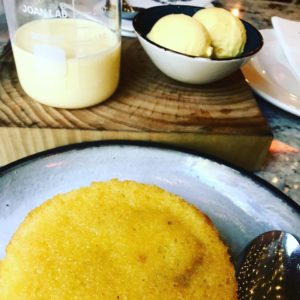 For dessert we ordered Tannie Hetta’s Apple Pie, served with crème anglais, and home-made vanilla ice cream (R70), with minimal apple in the pie. Our waiter was very un-knowledgeable when I asked him about the ingredients of the pie, so he sent Chef Kyle to the table, who told us all the ingredients: poached apple (not tasted), sugar syrup, star anise, cinnamon, vanilla, cake flour, sugar, salt, baking powder, milk, and eggs. Tannie Hetta is Bertus’ mother. Her apple pie is also served at Bertus Basson @ Spice Route. Two other dessert options are peppermint crisp king cone (R70), and fudge and nougat made by ‘Mamère‘ (sic), actually called Ma Mère (R85). The dry cappuccinos we ordered with the dessert were perfectly made.

The winelist is extensive, but difficult to navigate, divided only into ‘Champagne and MCC’ (but only Mimosa Blanc de Blanc sparkling wine from Robertson is listed, with no ‘Champagne‘!); ‘White‘, ‘In Between‘ (‘Spiceroute‘ – actually called Spice Route – Saffron Rose and Hidden Valley Hidden Treasure), and ‘Red‘. The wines are expensive by the glass, ranging from R60 to R85 for the white wines, and from R75 to R105 for the red wines. Severe help is needed in correcting cringeworthy typing errors on the wine list, e.g. for Hamilton Russell, and the exclusion of the brand name of one of the most famous South African wines, being Klein Constantia Vin de Constance! This winelist won’t win a Diners Club Winelist Award!!!

I had to rush off to a function, and asked Jacques for the bill. I was shocked when he asked me what tip he should add to my bill! Shocking to me was the cheap and nasty crap interior and furnishings, poor menu and winelist spelling, the lack of knowledge of the waiter, and poor quality crockery. The biggest disappointment was the minimal focus on South African dishes (a Chef Bertus Basson trademark) on the menu, which were a broad spectrum of French, Mediterranean, Mexican, British, and Asian dishes.

POSTSCRIPT 31/7: Chef Bertus Basson has taken my review very personally. I have responded to him as follows:

‘Bertus Basson (Mareli Basson). I am so sorry that you took my review so personally. Nothing I wrote could have led you to that deduction.

I do like you, and respect how far you have come since you opened at Overture. I love your dedication to proudly South African, the only chef to do so in our country, but overshadowed by our Michelin star chef Jan-Hendrik van der Westhuizen at his restaurant JAN in Nice.

You have been around for long enough to know that reviews are not written to settle personal scores or because two people like or dislike each other. I had not been to Spek & Bone, and made a booking for last Thursday, and paid for our meal there. Naturally my expectations were high, given your Top 10 status for Overture. My experience last Thursday is documented in the review. You will know that I am known for the honesty of my reviews.

It is a shame that you can not accept my feedback as being constructive, given that you do admit that you do not run a perfect business. To point fingers at my former guest houses, all sold three years ago, deflects from the faults in your restaurant, which you should rather focus on in fixing, in my opinion.

I never write to get a reaction from anyone, including you Bertus. I write as a service to other restaurant goers, and because I love writing. I don’t need sensation at all. As for ‘miserable’, it couldn’t be further from the truth, I am having a ball, and #❤️lovemylife❤️ is my hashtag of more than a year!

I cannot help but feel that you are going the same route as another high profile chef, who also had 5 restaurants, and a TV show, driven by commercial gain. There is no point in opening more and more restaurants if you do not operate them as perfectly as possible.

I would be more than happy to chat further with you over a cup of coffee.

POSTSCRIPT 2/8: I love this suggestion received today, in response to the angry retaliation by Chef Bertus Basson: ‘I wonder whether there isn’t scope for you to start handing out ‘whale-proof’ stickers to places that are not crap? After all, if it survives your scrutiny, the place must be worth going to’.

2 replies on “Restaurant Review: Spek en Bone has no bacon nor beans, little SA cuisine, crap in most respects”