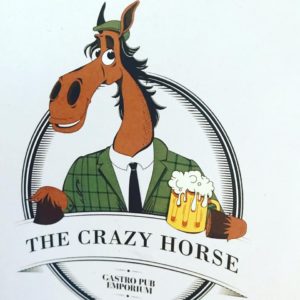 The restaurant has opened in the space once the home of Latitude, which had operated as a 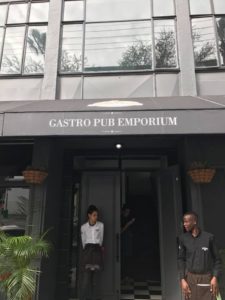 combination restaurant, surf shop, and clothing store, over two floors.  Signage is poor, the logo being too high up to be seen from the street. A canopy shows the descriptor words about The Crazy Horse, but not its brand name.

With the assistance of BMJ Design and Stocks Projects the interior was refurbished, giving the co-owners a taste of the reality of doing 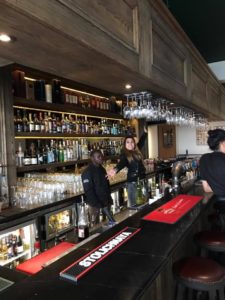 building projects in Cape Town. Carpeting to the first floor is lush and looks regal. Downstairs is a long bar counter, and the bar lady has a lot of spunk. A few tables are set up downstairs. The Gastro Pub is upstairs, with tables and chairs set up for patrons eating. On the walls we saw photographs of British icons, such as Lord’s cricket ground. A glass enclosed 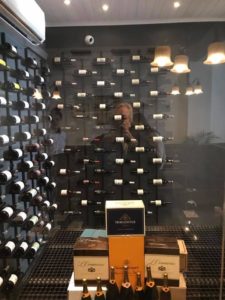 wine cellar adds class to the restaurant, with a case of Veuve Clicquot being visible, plus cases of other top local wine brands. A metal mesh floor in the cellar looks down onto the keg room below. 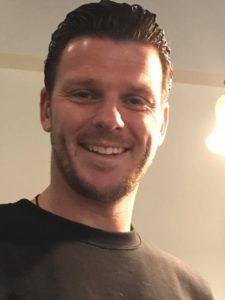 Waitress Tarryn found co-owner Ryan Harrison in the office, and he came to chat, giving us the background of the restaurant. First of all, he explained that he had come to our country from the UK seven years ago, as a professional football player for Bidvest Wits in Johannesburg, having played for Swansea in the U.K. He fell in love with Cape Town after a visit to our city. It was here that he met his business partner Tim Scudamore, a  fellow Brit who had come to Cape Town about 15 years before, and who had opened Asoka on Kloof Street. I teased Ryan about his British accent, which he still has, and he said he is proud of it, and does not want to lose it! It was the realization that there was no British-style Pub in Cape Town at which they could get together for a beer that made the two friends decide to open a Gastro Pub. They modeled The Crazy Horse on The Crazy Bear and Ragged Staff in Oxford, which has become a benchmark Gastro Pub. They want The Crazy Horse to become known as an easy-going and easy eating facility, to which one can go to ‘banter‘.  I asked Ryan what it was like to be a restaurant owner, and he replied ‘cool‘.

They connected with a number of British Capetonians as consultants, including Chef Matt Manning, who designed the menu, and Tom Prior from Marianne Wines, who had some input regarding the wine list.

Tables have black marble tops, while light brown wooden chairs have a brownish upholstered seat. On the table is a set of unbranded salt and pepper grinders, with very poor quality serviettes wrapped around the Fortis Hotelware cutlery – mine tore when I tried to unwrap the serviette. Gauze serviettes would be far better quality.

The menu is a simple but smart A5 one, with the logo on the front cover, and offering: 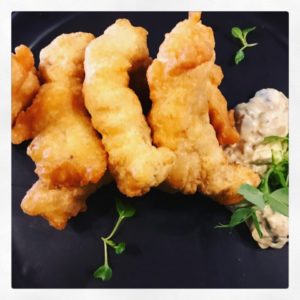 mustard mayo (R50); beer battered hake with a home-made tartare sauce (made with home-made mayonnaise, olives, capers, onion, and horseradish sauce, the olives giving it a browner colour), served as four strips rather than as a whole piece of fish, in a Mervyn Gers-designed ceramic pan, costing R70; Scotch egg and homemade tomato ketchup (R70); The Ploughman’s 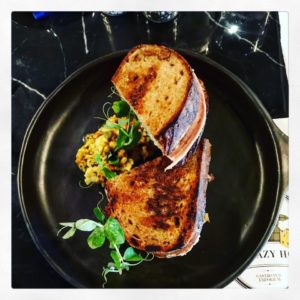 Toastie was Bella’s choice, on home-baked sourdough bread, with two cheeses supplied by Culture Club Cheese up the road, one of them being a goat’s cheese and the other English cheddar, to which was added a slice of gammon from Richard Bosman, also up the road, lemon zest, as well as piccalilli, made with carrots, onions, gherkins, mustard, and vinegar, served on a Mervyn Gers ceramic pan too, and costing R70; hash brown croquettes and hollandaise sauce (R70); crispy tender stem and blue cheese whip (R70); cauliflower cheese bites (R70); and Yorkshire ‘puds‘ with braised oxtail (R70).

#.  ‘Hearty Grub’, which is served between 17h00 and 22h00: chargrilled gammon, fried hen egg, roasted honey pineapple, and chips (R95); cheddar and onion risotto (R80); pan-fried ‘king klip’ (sic), pearly barley, oysters, broccoli, bacon, and walnuts, the menu still referring to Mussels and Brussels sprouts in the dish, we were informed verbally by Tarryn (R125); Beef Wellington ‘with all the trimmings served medium rare’, only 12 portions available per Service, according to the menu (R190); and the favorite, according to Tarryn, is the pie, mash, and gravy, the pie changing weekly, and currently is pulled pork pie, with only twenty portions available per service, the menu informs (R110).

#   Sides cost R30 each, and include a side salad, mash, chips, and roasted seasonal vegetables. 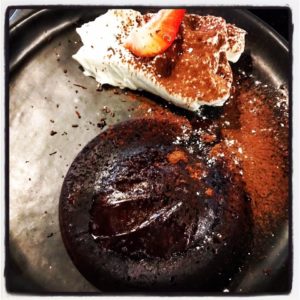 a tart with nuts, berry purée, strawberries, and custard (R60); and the recommendation of Chef Bryce Carr, the chocolate pudding and vanilla cultured cream, marked as R90 on the menu but charged as R80 on our bill! The chocolate pudding was luke warm (served cold according to the waitress), and was served with crème fraîche, cream cheese, vanilla pod, and castor sugar, in a Diana Ferreira ceramic bowl. It was delicious, a fondant-type dessert oozing chocolate by Afco, made from Tanzanian cocoa beans. Cheeses from Culture Club Cheese cost R125, but the number of cheeses is not specified.

Even though a separate Beverage List is offered, Draught Beer is listed in the Menu too. The House Lager must be the most talked about, being the ‘Horse Piss‘ Pale Ale made by Citizen Brewery, one I had not heard of before. Other draughts served are Citizen Alliance, Eversons Cloudy Cider, Brewdog Punk IPA, Fuller’s London Pride, Fuller’s Jack Frost Blackberry Ale, Fuller’s Black Cab Stout, and Castle Lite, ranging in price between R46 and R66. Disappointing was being handed a food-stained menu.

The Sunday Carvery is not listed in the menu, the offering being roast lamb, roast chicken, and roast beef, each meat type costing R150, or R200 for all three meat types. The meats are served with baby carrots, Yorkshire pudding, green beans, and house gravy. Dessert is extra, and apple crumble and Bread and Butter pudding are offered. 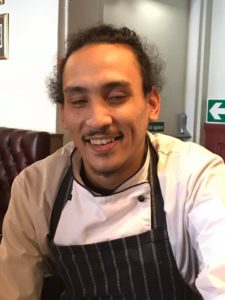 Chef Bryce Carr came to say hello, and helped answer some questions. He told us that he had previously worked at the Bay Hotel with Chef Warwick King, at the Company Gardens Madame Zingara restaurant, and at Black Sheep on Kloof Street. Chef Bryce expressed gratitude for the training he received from Chef Matt over a two month period, in preparing a cuisine he had no prior experience of. We spoke about the staff knowledge of the dishes and Chef Bryce was the first to acknowledge that it is still lacking.

We found the waitress to be unsure of answers to my questions, but she was willing to find answers to our questions. The food was good quality, but the menu needs updating to reflect ingredient changes, and stained menus should be removed. I like that they make their own sauces, and bake their own bread. The British-style Gastro Pub should become popular, given the large number of Brits living in Cape Town, as well as British tourists visiting our city!