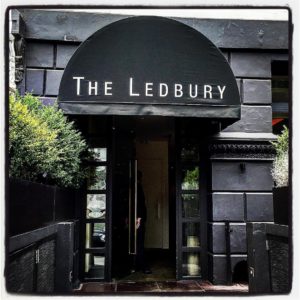 The Ledbury is London’s top restaurant, and was ranked 14th on the World’s 50 Best Restaurants list in June. It also boasts two Michelin stars.

Although I wasn’t feeling well, there was no way that I would miss out on this lunch reservation, especially as a friend with a connection had made the booking for me. The Ledbury is based in Ledbury Street in Notting Hill, a good address.  The grey carpet outside, leading into the restaurant, looked ordinary.

The Ledbury opened in 2005, is owned by investors, and its Chef is Brett Graham, an Australian who started cooking at the age of 15 years. He worked at Banc in Sydney, when Chef Liam Tomlin (now in Cape Town) was the owner. He moved to London, working for Chef Philip Howard.  Greg Austin is the Head Chef and Darren McHugh is the General Manager – he was in the restaurant but did not come to my table. Sam Lucas is the Restaurant Manager.

I was told that Chef Brett is a keen forager and hunter, and this came through in the menu, and the decor. In the Ladies cloakroom deer horns are displayed.

Of the waiters and managers I interacted with, Assistant Head Sommelier Anna Mayr was the only one to engage with me, her South Tirol background coming through and speaking German to me. Everyone else was very stiff and formal, and wearing suits adds to the feeling of coldness. I must commend the attention to refilling my water glass and bringing ice cubes by the junior waitress.

The room has a mirrored wall at the far end of the room, appearing 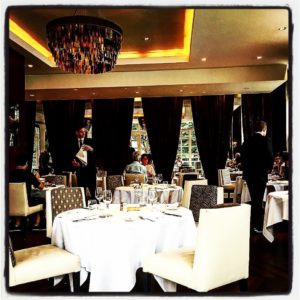 to enlarge the room size, with dark brown drapes over them, tied back. One brown modern chandelier looks lost. Cream highback leather chairs are brightened with patterned back upholstery. Tables are round, making it easy for waiters to get to each place setting, and are covered with white tablecloths, and napkins are provided. Cutlery is by Robert Welch.

On the table were salt and pepper grinders with silver inlays by Hersey Silversmiths, and oddly, a little glass container with a twig of seaweed and a sea anemone shell. The link is not understandable.

The menu presentation was impressive, a strong board cover into which the Tasting Menu (eight courses cost £115, and £195 including wine pairings), the four-course Menu (£85), and the four-course set Lunch Menu (£50, and £90 with wine pairings) were inserted. The cover has a beautiful illustration of a Snipe bird, lifting the quality of the menu even further. Impressive was that a custom-made menu was prepared for me, in A5, with the bird on the cover too, when one of my dishes was substituted. I was allowed to take the menus with me. 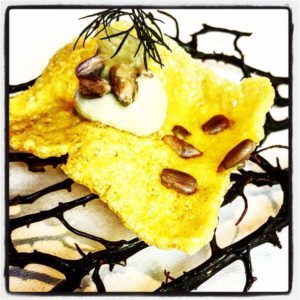 I chose the four course set Lunch Menu, but one dish was replaced from one of the other menus due to my mussel allergy.

The Ledbury was very generous in sending out three Amuse Bouche dishes. As they were unusual, it was disappointing that they were not described in greater detail when 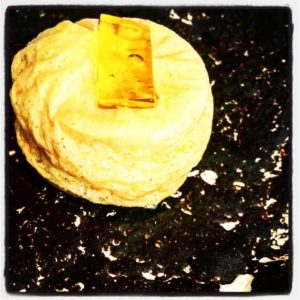 brought to the table.  The first Amuse Bouche was a sunflower and artichoke crisp, attractive in its presentation, and introducing a nature feel being presented on twigs. 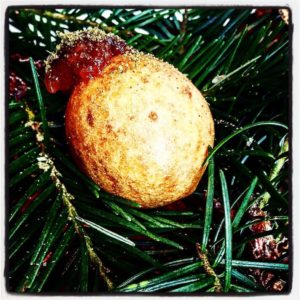 fermenting honey with other beverages).  The third Amuse Bouche was Muntjac (a deer variety), served with quince, Apple, and mustard. It was plated with pine needles, giving it a real forest feel.

The first course on the Set Menu was a salad of vegetables, including radish, artichoke, potato, carrot, and beans, with nasturtiums from the restaurant garden, a warm pheasant’s egg, 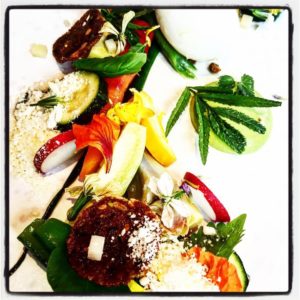 lovage, and Parmesan. The egg had a distinct salty taste. The dish was paired with Clos des Lunes, Lune d’Argent 2013 from Bordeaux. 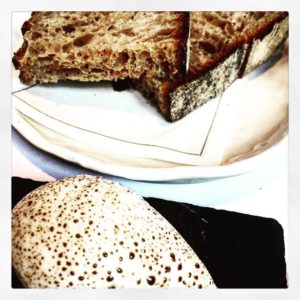 me that they now outsource the bread, their kitchen being too small to bake it in-house, and it is delivered every morning.

The second dish on the set menu was steamed Romenesco with lobster cream and basil, but as it contained mussel stock it was replaced with native lobster which had 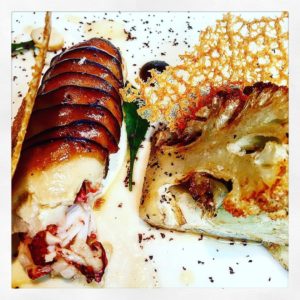 been wrapped in shiitake mushrooms, and was served with roast cauliflower and macadamia nuts. This dish was paired with Keermont Terasse 2014.

Poached and roasted chicken seemed an ordinary meat type to serve as a main course, but it did have summer 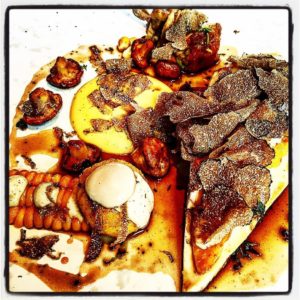 truffles plated on it, with sweet corn and girolles (also known as chanterelle mushrooms). The chicken was described by the waiter as being 90 day old chicken from France, odd that such a delicacy could not be sourced from the UK. This dish was very slow to be served. The pairing was with Herrenstück Pinot Noir 2013 by Holger Koch in Baden, Germany.

The dessert of strawberry tartlet, vanilla cream, violet ice cream and strawberry sorbet was the prettiest one of all 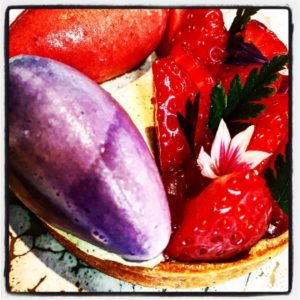 the meals I enjoyed in London and New York, the colours being fresh and refreshing. This dish was paired with Brachetto d’Acqui 2015 by Contero in Piedmont. The dessert course could be substituted with cheese from the trolley, at a supplement of £10, or a charge of £15 as an extra course.

The Tasting Menu must be taken by the entire table. Dishes on the Tasting Menu are Fresh Almonds, White Beetroot, Warm Pheasant’s egg, Roast John Dory, Jowl of Pork, Herdwick lamb (the only dish paired with the South African wine Optima), pre-dessert, Brown Sugar Tart, and an optional cheese course at an additional £10.

As I was not feeling well, I declined the wine pairings, but I did ask Anna if I could see the 40-page wine list with a branded leather cover.

There is little to fault at The Ledbury, except that twice staff stretched across me to add cutlery, despite there being enough space to get to my left and right hand side. The servers are cold and distant, and take no interest in explaining the dishes, just briefly mentioning their name from the menu. I felt that the staff had no interest in me as a diner, just taking the order, topping up the water, and removing the plates! I felt no connection with the restaurant or its staff, with the exception of the charming Anna. What I did find disturbing was seeing napery being changed, and ironed on the table in an almost full restaurant, only seen at Eleven Madison Park in New York!