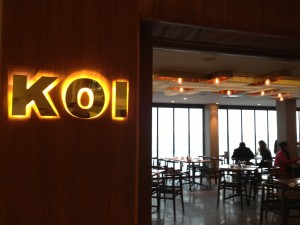 The opening of KOI Bantry Bay at The Ambassador Hotel has been eagerly awaited, after it was announced that Salt Restaurant would be replaced with a Gauteng-based group restaurant, KOI restaurants already operating in Sandton, Rosebank, and in Pretoria. The KOI restaurants are sister restaurants to the Wakame (with Wafu) restaurant group in Cape Town, which was founded 15 years ago, and is headed up by co-directors Stewart Bond and Rory Jossel.  There are no koi at KOI, and other than a logo on a business card, there is no representation of the decorative carp in the restaurant.  The website defines the KOI name as being Japanese for ‘Come, Love, Fish‘.

Always on the lookout for a good restaurant on the Atlantic Seaboard, a rarity, I was looking forward to seeing how the restaurant group would give the hotel restaurant space new life. Despite having the most magnificent location, ideal to see sunsets as it faces west over the Atlantic Ocean, the restaurants at The Ambassador just do not seem to have staying power, and neither do their chefs and staff for that matter!   Some decor changes have been made, wooden grids guiding one to the end of the passage, with only one entrance now, the previous entrance to the lounge 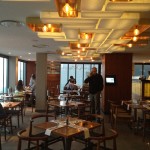 and bar area having been closed. The lounge area now is restaurant seating too, with space for a total of about 100 patrons the Manager Chris Somhohlo said. Wood dominates the decor style (Chris couldn’t remember the name of the decorator), with wooden table tops, wooden chairs with woven seats, and the woven grid theme picked up in the visual display covering an entire wall, in the new ceiling lighting, and in the lampshades too.  The original bar counter now is the kitchen’s food preparation area, and one can sit at the counter and watch the chefs do their job.  The table has a material serviette spread out over the eating space, with Fortis Hotelware cutlery, a set of 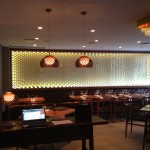 disposable chopsticks, and Kikkoman sauce.   The restaurant was about a quarter full at 18h30 on Tuesday, but was incredibly noisy, as there are no carpets nor curtains to absorb any of the sound.  As the hotel no longer has a lounge, KOI doubles up as a meeting and drinking place, and an eating place.

I was shown a table located directly at the reception desk, at which the restaurant phone is located, and it irritatingly rang regularly, either for reservations, or orders for room service from hotel clients.  My interaction with waiter Lloyd started off badly when he asked me how many persons we would be, when I arrived on my own!  He told me that he had moved across from the V&A Hotel, belonging to Newmark Hotels too.  He made no attempt to make conversation or explain anything proactively at all.   There seemed to be more waiters than patrons, but the waiters were more interested in chatting to each in the doorway of the restaurant rather than attending to their guests. Manager Chris did not appear to have control over his team of staff, and did not proactively come to chat, only reacting to my plea for service assistance.  I asked him for a copy of the menu, but it took the whole hour in which I was there for him to tell me that there was no working printer in the hotel! Chris told me that he had been moved down by KOI from Johannesburg, and shares the management role with Sasha Nicholson, who has moved over from Wakame.   Chris shared that he has a mix of staff, some from Salt, and others newly recruited.   The staff, wearing light grey shirts and dark grey branded aprons, seem to do what they want to, and I sat near a shouting match between two staff over the serving of sparkling wine to patrons.   The biggest shock was that an Asian restaurant such as KOI has no Asian staff! 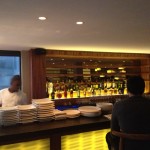 Chris said that the Salt Chef Dale Thebus is still in charge!  If I’d known this upfront, I would left immediately, and not wasted R275 on my meal!

The menu looks very presentable, in a black leather cover and the branding embossed on it.  The menu is standard for all four KOI restaurants, and their addresses and contact details are available at the back of the menu. It is divided into sections, there being little uniformity in the presentation of each.  The Dim Sum section begins with a definition (‘Chinese cuisine which involves a wide range of light dishes served alongside Chinese tea‘), and encourages one to ‘order collectively rather than individually‘.    It is accompanied by a photograph.  The Dim Sum dishes are offered fried or steamed, ranging in price from R38 for Spinach and cream cheese, and Butternut, spinach and feta,  to R46 for Prawn and shitake mushroom, and Chicken and prawn Siu Mai topped with caviar.  All dim sum is served in portions of three, but platters are also offered – six pieces cost R85, eight cost R120, 10 pieces R140, and a vegetarian platter of six pieces costs R74.  The ‘Starters‘ section is dominated by five types of spring rolls (two pieces costing R42 – R55); ‘thinly sliced peppered beef‘ at R85; 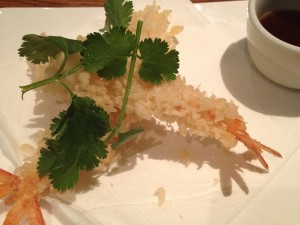 tempura prawns at R60 – two long ‘fingers’ which broke immediately when I lifted them, containing two tiny prawns in each and the rest just bland batter, served with miri soy sauce, but the waiter could not explain how it differed from the Kikkoman soy sauce; oysters (SQ); edamame (R55), and three soups, including Tom Yum Goong soup at R72.  Eight salads are offered, including lesser known Japanese salad (fish on greens) and Sunomono salad (sashimi with wakame and cucumber). Steamed rice and other side orders cost R30.

The Sushi section looks attractive with colourful photography, and some ‘Sushi Facts’ offered, such as the vinegar used to make sushi rice has ‘antiseptic properties which can lower you cholesterol‘;  wasabi is green horseradish which is rich in Vitamin C; gari – the pickled ginger -is a ‘antibacterigen‘; the seaweed nori has high levels of Vitamin A, B complex, C and niacin, and is a digestive aid; sushi is a good source of omega 3 fatty acids which are good for the heart, and nutritious in being low in fat and rich in protein.   The bulk of the menu pages is dedicated to sushi, eighteen ‘Specials’ ranging from Cajun Salmon Skin Roll at R88 to R128 for Rock Shrimp Tempura Roll. The a la Carte options consist of platters of Nigiri (R35 – R52 for two pieces), Sashimi (R38 – R60 for 3 pieces), California Roll (R58 – R85 for 8 pieces), Fashion Sandwiches (R65 – R 88 for 8 pieces), Maki Roll (R36 – R58 for 6 pieces) and Gunkan (R38 – R58 for two pieces). I tried the Prawn handroll, at R55, a favourite when I order sushi, 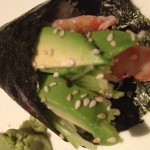 but it was small, dry without any trace of mayonnaise, and disappointing.   Platters of sushi can be ordered from R125 onwards, for 13 vegetarian pieces, to R380 for 26 pieces. 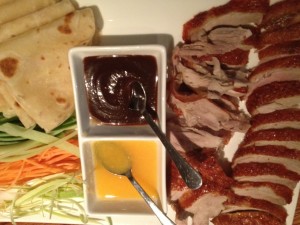 crusted seared tuna.   I ordered Crispy Peking Duck (R160), served with five dry cold cardboard-like pancakes, carrot, cucumber and spring onion sticks, horrid oversalted hoison sauce and a refreshing but thin citrus dipping sauce.  The plating was uninspired, and the duck was cold when it arrived at the table.  I sent it back, and it was returned slightly warmer!  The dessert list is short and sweet, most desserts costing R44, for chocolate and banana spring rolls, a duo of chocolate mousse, lemongrass crème brûlèe, ginger and sake tiramisu, and yuzu tart with berries. Green tea features strongly on the menu, but I was not offered any (nor coffee)!). They offer four green teas (R28 – R58), as well as ten Flavoured Green Teas, costing around R30. Rooibos, ‘Oorlong’ (sic) and flavoured black teas are also available.

The winelist is also in a leather folder, in grey, neatly presented, but falls down when it does not present any vintages for its wines, yet offers detailed tasting notes for each wine!  The winelist was brought to the table when I sat down, but I was not asked if I wanted any! The winelist opens onto a ‘Managers’ Selection Wines‘, and I asked Chris if he had selected them.  No, he said, they were selected in Johannesburg, and the winelist does not yet reflect the new Bantry Bay branch!   The Manager’s list recommends an interesting mix of wines, e.g. Klein Constantia KC Sauvignon Blanc (R139), the Chenin Blanc recommendation at R177 ‘Mullineaux (sic) Kloof Street‘, Muratie Laurens Campher (R210) is recommended as the white blend, Babylonstoren Shiraz at R210, and Diemersfontein Pinotage at R200.  A good selection of 12 wines by the glass is available, the ‘white wines‘ including MCCs such as Pierre Jourdan (R45/R214) and Silverthorn ‘The Genie (sic) Brut Rose’ (sic) at R75 per glass, as well as Secateurs Chenin Blanc R42, and Glen Carlou Chardonnay R65.  Red wines start at R42 for ‘Paradyskloof GMS’ (sic) to R70 for First Sighting Pinot Noir.  Veuve Clicquot Brut Yellow Label costs R921, and its Rosé R1169, while Dom Perignon is charged at R2662. Only two Shiraz brands are offered: Dombeya Boulder Road at R202, and Kevin Arnold at R372.

KOI Bantry Bay is nothing more than Salt restaurant with a new expensive Asian-style menu, some imported KOI staff, a restaurant clearly aimed at the hotel guests in the main. Cape Town Asian food lovers can find better quality and less expensive Asian food at Shimmy Beach Club, Willoughby’s, Kitima, and other genuine Asian restaurants rather than waste their money at KOI Bantry Bay.  The stated promise one sees as one opens the KOI website (which repeats on each page that the Bantry Bay branch is to open in August!) is completely false and misleading: ‘Simplistic yet comfortable, Koi promises a unique dining experience with Asian expertise combined with contemporary style cuisine that is uncompromised, service that is impeccable and a complete experience that leaves nothing to be desired. Koi is the definitive origin of perfection‘!

POSTSCRIPT 19/9:  I returned the menu yesterday afternoon, and bumped into co-director Rory Jossel.  He asked if I was the review writer and graciously thanked me for the review feedback, seeming shell shocked, and saying that they had never received such feedback before (only one other blogger has written about the Bantry Bay restaurant to date).   He said that Chris is one of their best managers. I wanted to say to him (but didn’t) that what works in Johannesburg may not work in Cape Town!

POSTSCRIPT 20/9: Voila from the Cape Quarter is taking over Salt Deli at The Ambassador in November.

8 replies on “Restaurant Review: There are no Koi at KOI Bantry Bay! Poor service, faux Asian!”