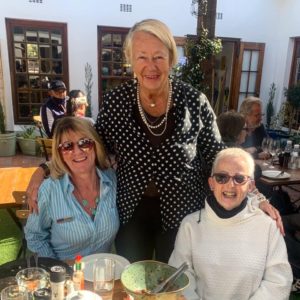 Three weeks ago two friends living in the Southern Suburbs and I met for lunch at Quince Restaurant in Diep River, having seen its lovely photographs posted in my Lockdown Restaurant Facebook Group. Needing a change of scenery from the Atlantic Seaboard, I chose to drive to the Southern Suburbs, popping in at a number of places, and had lunch at Quince Restaurant, arriving with high expectations. Sadly these were not met.

My visit to Quince was preceded by popping in at the Little Orchard nursery on the same property, not being able to resist buying plants for my apartment garden. The first section I looked at had a number of plants which I wanted to buy, but they had a sold sign on them, which seemed odd. I had to find someone to assist me, asking about some of the same ones I’d seen. The lady helping me did not seem very knowledgeable, and had to obtain assistance. I found the open-air nursery to be very shabby and untidy, a number of plants having fallen, and most of them having no detail on the trays as to their name and planting guidelines. I had to walk to the shared nursery and restaurant building to pay, and was given the tiniest slip from the cash register, smaller than the credit card slip, and with no plant name details. I requested a more professional invoice, and had to wait for a supervisor to hand-write it (slowly), completely unprofessional. There was definitely no Manager or owner of the nursery present. At no stage were any Covid regulations followed, other than that the nursery staff wore masks. This was not a good introduction to co-tenant Quince!

I met Colleen in the car park when I put the plants into the car, not having met her before, but we are Facebook Friends. We seem to be kindred spirits, so this was a lovely opportunity to meet. Colleen and I had a look at the minute Deli, in which a man stood behind the counter, filled with jars of preserves. Once again, there was no Social Distancing outside the door, ideally only one customer at a time entering according to Social Distancing regulations. The man turned out to be Rael Abramowitz, the person who posts for Quince, and I had called him especially the day before to check if he would be there, which he confirmed. In walking through the Deli, there was no communication or interaction from him. Lulu joined us a little later.

There are two entrances to the restaurant, both from the car park, but there is not a formal reception area, the courtyard between the two legs of the building clearly being the most popular meeting place, and as it was a warmer day, we selected a table outside. There are two other restaurant rooms, one only seating one group of friends, all other tables having been removed, possibly for other diners sitting in a back garden which I only saw later, and a second restaurant room well filled with tables, with only one table occupied. The distance between the tables in the courtyard does not meet the Social Distancing regulation.  But it sounded jolly outside, despite a smoker sitting here, and another table having brought two dogs, who barked at the waiter when he took the order, and at another dog which had been brought on a nursery visit. The barking at a restaurant lunch was most 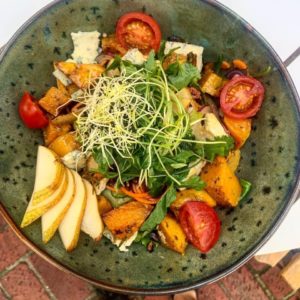 Our waiter handed us the paper A3 double-sided Menu, with options for Breakfast (until 12h00), Lunch (main courses in the main), Burgers, Farmhouse Tartines, Fresh Garden Salads, and Desserts. All three of us headed to the Salad section. Lulu and I both ordered the Smoked Salmon Trout Stack (left), which was served with avocado, green apple slices, caper berries, filled boiled egg, and drizzled with cumin cream lemon dressing (R150); while Colleen ordered the Greenhouse Roasted Butternut (right), a Salad to which was added Gorgonzola, caramelised pear, toasted walnuts, and ponzu honey dressing (R130). The presentation was colourful but somewhat old-fashioned, but I loved the 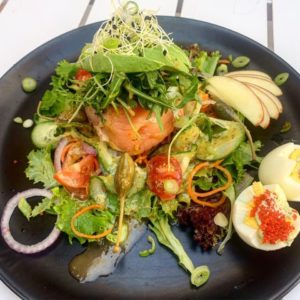 apple in my salad, an unusual touch. I was not super impressed, and found the prices steep in general, the cheapest Burger costing R120, Tartine sandwiches costing R90, Kingklip R180, fishcakes almost R100, as were most of the breakfast dishes.

We declined the Dessert temptation, four options at R65/R70, but Colleen and I ordered a tea and a coffee. Only whilst writing this story did I see the restaurant credo on the back page, 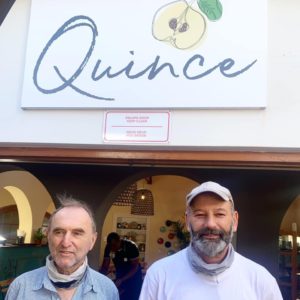 which we did not look at whilst ordering our food: ‘We consider the earth first in our choice of locally sourced produce: organic, free range, grass-fed, recyclable and pesticide free’.

It was only when I asked to meet Rael for a photograph that he came out of the Deli. He insisted that Graham Isaacson join in the photograph, as he is the restaurant owner. We had seen Graham on the floor, but he made no effort to visit our table to find out if we were enjoying our meal, the strangest lack of interest which I have seen in a restaurant owner/manager in a long time. Graham previously owned the Lime Tree Café, and the restaurant at Imhoff Farm, opened the Spaanschemat River Café at Constantia Uitsig with Judy Badenhorst, and was the Executive Chef at the Mount Nelson Hotel.

I was completely underwhelmed by Quince, and we only saw preserved Quinces in the Deli, not even seeing a Quince dessert on the menu!

POSTSCRIPT 11/8: This Review led to a barrage of attacks, some extremely nasty, on my Lockdown Restaurant Facebook Group, so much so that I had to close the comment section and remove two members of the Group. Rael and a family member of Chef Graham took on the attack on my personal Facebook page.

Even worse was the reaction of Chef Graham Isaacson, who communicated on Messenger all afternoon, becoming ruder and ruder, clearly not accepting any responsibility for the deficiencies I had highlighted:

Graham: ‘Neither you nor your friends were wearing masks…hence the avoidance……’

I : ‘We came with masks. We were three! How do we eat with masks on? It didn’t bother you to bring the bill to my table though! Just seen now that you were also not wearing the mask in the pic… ’

Graham: ‘Your waiter was tasked..as is customery (sic) in the industry…’

I : ‘Nonsense, so disrespectful to not show interest in your customers!’

Graham: ‘You should clarify and provide honest reviews before publishing , you are unethical!!!’

Graham removed a number of his other comments, including accusing me of ‘blabbering’….!

2 replies on “Restaurant Review: There are no quinces on the menu at Quince Restaurant, poor Covid compliance!”