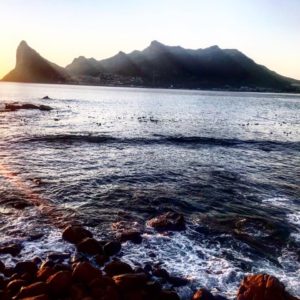 In Cape Town Tintswalo is a magical word. An exclusive destination with a password, or a special connection to be able to dine there. My Parisian friend Aurélie Jullien and I had the pleasure of enjoying our dinner there on Saturday evening, the crowning glory of a fantastic False Bay sightseeing trip.

For our False Bay Trip Aurélie had a special request, and that was to have a 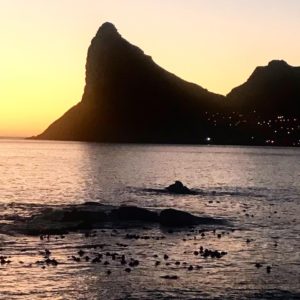 drink at sunset at Tintswalo. I phoned, and was told that one cannot go there for drinks. I then asked to book for dinner, but they need 24 hours advance notice. Chef Guy Clark, who worked at Tintswalo until recently, came to the rescue with their Chef Thando, he being able to organise us a table for the same day. We were extremely grateful to both chefs. The main focus of this boutique luxury accommodation is the in-house guests, who have first dining priority.

We could drive along Chapman’s Peak slowly, with beautiful views and little traffic, until we got to the Tintswalo gate. At first the security could not find us on the list, but then let us in without any greeting or instructions. We were collected from the car park, and enjoyed a good hour of sunset. The setting is superb. We were blessed with a whale sighting too. One parks near the gate, and then is driven down to the Lodge. 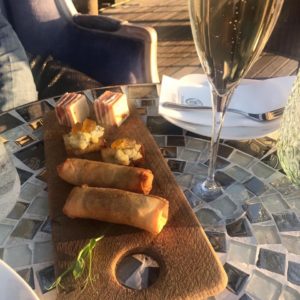 Canapés are served with the welcome drink, I sticking to tap water and Aurélie enjoying a glass of sparkling wine, the brand not being revealed to her. Chef Thando came to greet us, and to talk through the menu. Dietary requirements were established. The five course dinner offers two or three options per course, and I was allowed to photograph the dishes at the pass, with better light.

To start, a soup is offered, Cauliflower on our 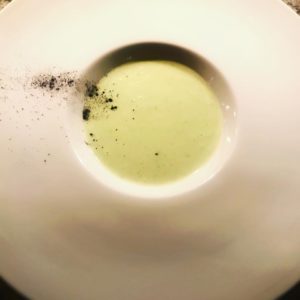 menu. When I asked if there was an alternative, the waiter Enoch said that they could do potato and leek too, so I had the latter and Aurélie the former. I liked that my soup bowl had a touch of ash on its rim, giving the dish an extra chic appearance. Bread had preceded 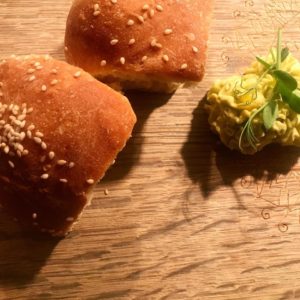 the soup, and seemed a boring ‘white bread’ roll topped with sesame seed, Enoch not being able to give it a more descriptive name, despite me pressurising him. The bread course was completed with a basil butter.

Aurélie was very courteous in allowing me to order first. Without discussing our choices to each other before ordering, it was luck that we had a different choice for each course, allowing us to photograph two dishes 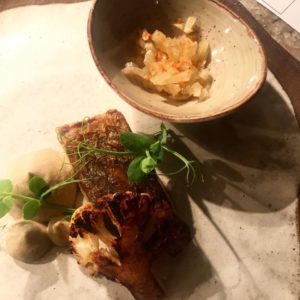 per course.  The menu is commendably detailed as to each item in the dish, making it easy for me as a writer, and giving the chef the opportunity to have the correct details communicated to the patrons.

Our starters offered a choice of fish, springbok, and vegetarian. Aurélie chose the sea bass with burnt cauliflower, eggplant mousse, and Maison mignonette, the latter word not being clear to us, not even to the 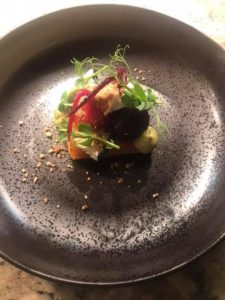 French-speaking Aurélie. For safety’s sake, it was plated in a separate bowl. I ordered a vegetable-dominant Colombian style arepa, a word I didn’t know, a type of flat cake made with polenta, and served with baby beetroot, ash-cured goat cheese, dukkah spice, zucchini purée, and pea 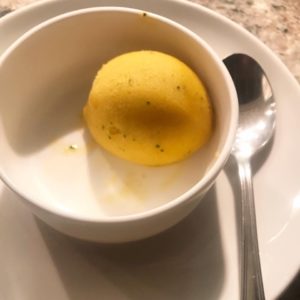 It surprised us to have a palate cleanser, or Refresher as per the menu, after the starter, before the main course. Aurélie ordered the papaya and mint, and I had the coconut and lemon, both very refreshing. The 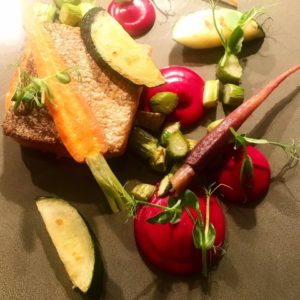 coconut and lemon one was less photogenic, a white ball of sorbet on a white plate.

My main course choice was sea trout, a fish type I had not heard of before, offered with onion soubise which I asked to be excluded, veloute of beetroot, zucchini, chopped up asparagus, a pity as it was hard to identify initially without referring to the menu, heirloom 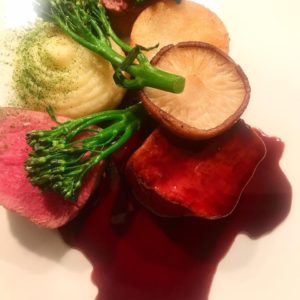 carrots, and pea shoots for the final touch. Aurélie’s choice was beef fillet, identified on the menu as originating from ‘Greensfield’ in Napier, and as being grass-fed. To this dish was added a port jus, as well as Gorgonzola cream, the latter dominating the taste of the beef, and an overkill, given the jus on the 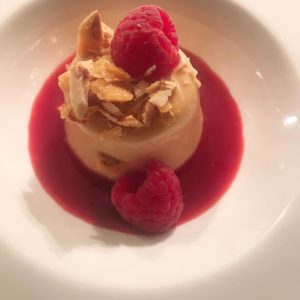 plate too. Two potato variations were part of the dish, and the dish was finished off with Broccolini.

The desserts were more classical, a choice 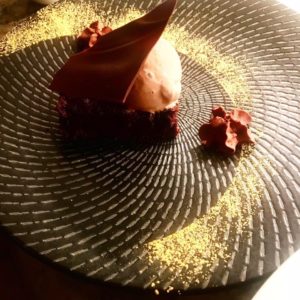 of pannacotta or chocolate. I selected the vanilla Pannacotta, berry coulis, an unusual topping of mixed nut brittle, and topped with fresh raspberries. Aurélie chose the Variations of Valrhona chocolate, the menu only offering us words: ‘Soft. Hot. Cold. Light. Crisp’. We were not told what was on the plate. I liked the gold dust circle, breaking the dark brown on a beautiful brown textured plate. We were offered a coffee, but declined. 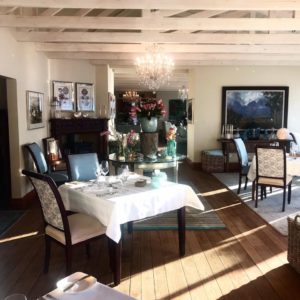 Aurélie very courteously had offered to pay for the dinner, but could not find its cost on the Tintswalo website, nor is it on the menu, nor is one told when booking. At R830 per head all inclusive, other than an annoying R40 extra charge for the tap water,  not declared to us, it was superb value, with the beautiful sunset setting, the canapés, the bubbly, and the five course spoiling 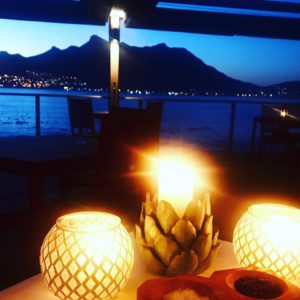 dinner. On the menu the letter ‘v’ denotes ‘Vegetarian’, but the menu page is folded into a menu holder, and one cannot see this last line on the menu, until one takes it out of the holder, as I did to take it home with me.

We were well looked after, but there were little service irritations. The duty manager asked us once if we were happy with our meal in a way that he assumed that we were, without welcoming any feedback at all. The music belonged in a disco, and not in a fine dining restaurant. The cutlery was laid out for all the courses, very commendable, but when the dessert spoon and fork had to be moved to our sides, it was done so by stretching across us to place the fork, a pet hate.

2 replies on “Restaurant Review: Tintswalo Atlantic dinner with a view!”