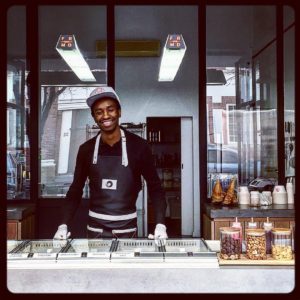 Cape Town has just upped its food game, with the opening of the new artisinal Unframed Ice Cream Parlour on Kloof Street. The taste of the twelve flavours is sensational, and the unique flavour range is impressive!

Unframed is owned by Frenchman Yann Rey, who has brought his ice cream artistry to Cape Town.  Yann fell in love with Cape Town when he visited our city, and left his investment banking job in New York to invest locally by following his dream. Unfortunately he was out, attending a meeting elsewhere, when I visited yesterday. Friendly Mazvita explained the ice cream flavours, 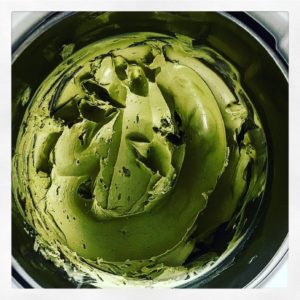 and filled me in on those that were not labelled.

Four of the flavours are vegan, made with coconut cream and coconut milk. Vegan options are Matcha Tea (photograph), Jasmine Rice Lemongrass, Chocolate, and Lime and Banana. 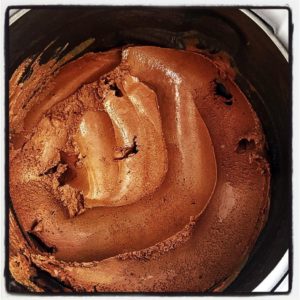 The ice creams are made in-house, in a ‘kitchen’ (the Lab, Yann corrected me telephonically) behind the serving station. Only the waffle cones are not made in-house, but are vegan. One can order toppings, of superfoods, caramelised cashews, cookie crunch, and caramel macadamia, each costing R12. Sauces currently are Dirty Sea Salt 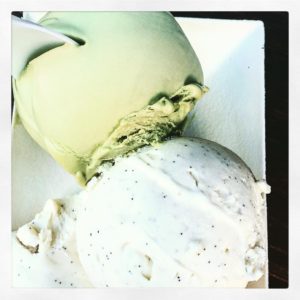 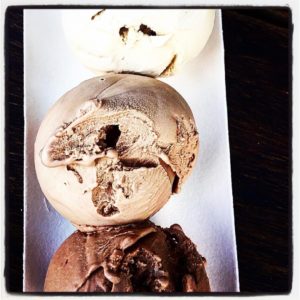 Chocolate, and Sea Salt Chocolate (these three flavours in the photograph on the left). I had to take the Flight home as a take-away, it being so filling.

I hope to meet Yann, and will add feedback to this blogpost when I have done so.

Exterior branding is non-existent. Unframed is next to Molten coffee shop, and opposite Spar on Kloof Street.  There is no seating, and I felt bad sitting at a Molten table outside, although the two businesses appear to have a good relatrionship.

After posting this review, I was able to contact Yann, and arrange 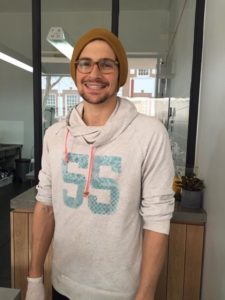 an interview with him for early this afternoon. We chatted in the Lab (and not the ‘kitchen’ as I had referred to it above), to reflect the scientific manner of their artisanal ice cream production.

Yann is only 32 years old, and grew up in Lyon. He wanted to become a chef initially, he told me. He studied Engineering and Finance in Lyon and in Paris, and moved to New York, where he became an investment banker. He gave up on the career, quit his job, and went on a long trip around the world, which included in its second year Cape Town, at the beginning of last year. The kitesurfing attracted him to the city, but he also saw the opportunity to make his dream of an artisanal Ice Cream Parlour come true, being a lover of ice cream.

He teamed up with Stephane Auge, an ice cream craftsman who has won an award for best ice cream craftsmanship in France, with whom Yann creates the exciting flavours, engineering recipes, which are then applied in Cape Town, with the recipes and temperatures tweaked locally. He explained that the science of ice cream consists of air, water, fat (milk and cream), and sugar, and finding the right balance between these four elements creates the perfect ice cream. Yann says that Unframed’s ice cream is superior to any other local ice cream, for a number of reasons:

#   No eggs are used, as they tend to make ice cream heavier, and influence the flavours of the ice cream 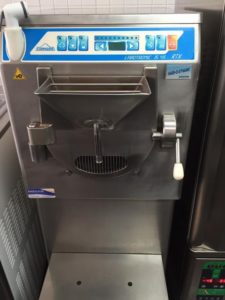 They use the best equipment, a Carpigiani machine from Italy. The ice cream is temperature controlled in the serving units, at -13C.

#   They source the best ingredients, for example their cream is Elle & Vire from France, and they use imported Valrhona chocolate, creating higher input costs, and therefore their prices are higher compared to other local artisanal ice cream.  I was impressed that the tasting cups and flight tasting ‘plates’ are biodegradable, made from sugar cane pulp, while their spoons are made from compostable plastic.

#   Unframed offers the most diverse and unusual elegant flavours.

Michael Chandler from Chandler House with Laura Kawitsky did the interior design, with a partner. Next week the words ‘Ice Cream Artistry’ will go up above their outlet. Then Yann will work on seating a little higher up on their block. His plan is to grow the Unframed brand slowly, through word of mouth.

Yann’s management style is one of delegation and empowerment, and he is planning to appoint a local management team, which will enable him to travel between New York, Cape Town, and France. But he is adamant that he is not planning to become the ‘Haagen Dazs of the world‘.

We tasted the newest flavours created this morning, the Lime Lemon and Basil sorbet, which had a more pronounced basil taste compared to the version which I had tried yesterday; and then a hazelnut and almond ice cream, tasting deliciously like Nutella and Ferrero Rocher chocolates.

I asked Yann about the origin of the brand name, and he explained that they had initially thought of opening an art gallery with an ice cream parlour. This led to the Unframed name, denoting that they do things differently, Yann bringing a different angle to the business, its products, and its marketing. Interesting news is that Yann is talking to local restaurants, for them to use his ice creams in their dishes!