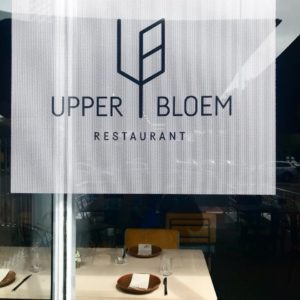 Just over a month ago I met Parisian Instagram follower Aurélie Jullien by chance at a Woolies in Sea Point, she recognizing me, revisiting Cape Town in loving its restaurants and the beauty of the city. On her invitation we ate at Upper Bloem restaurant on Saturday, a new restaurant with a Cape Malay-inspired Tapas Tasting Menu focus.

It was bizarre entering the space after a long absence, having been a regular patron of many 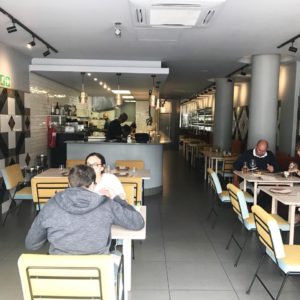 of the restaurants and coffee shops in it over the years. The shape of the restaurant is an uncomfortable one, a long narrow shape due to a large part of the space being taken up by the open plan kitchen. It has a lovely terrace, which will add more tables to the restaurant in summer. Given that the restaurant is bringing the Bo-Kaap into Green Point, co-owner Head Chef André Hill having lived in Upper Bloem Street in Bo-Kaap, the decor is mustard/gold/curry in colour, with touches of blue on the chairs. Tables are 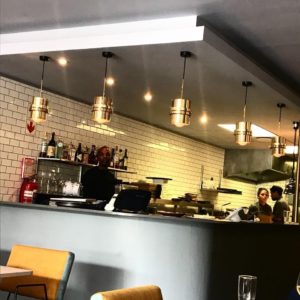 blond wood, a neutral touch. I did not like the geometric tiles on the walls, striking yet not having a link in colour nor design to the Bo-Kaap. Walls are painted grey, a classy neutral colour. Cutlery is upmarket, by Sola. Crockery is by Ethnic Ceramics from Hout Bay, photographing well, the eating plates not being to my liking, but the coffee cups and dishes in which the food was served enhancing the photography.

The restaurant is co-owned with Chef Henry Vigar, the co-owner of La Mouette. Chef Andre has been a long-term employee of the Sea Point restaurant, and he was given this opportunity to open his own restaurant. 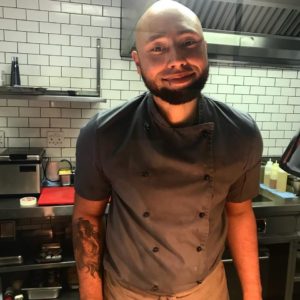 Chef Andre runs the kitchen hands-on, with two other chefs. We spoke briefly, he apologizing for not being able to make replacement dishes for me. He strikes me as very shy and introverted, and he does not visit the tables. The manager Hazel makes up for this, being strong in character, keeping a watchful eye over our waitress Jane, and also regularly visiting our table, to answer my questions, and to add information.

What is unusual for this restaurant is that there is no a la carte menu, but one has two options, in ordering a bread course at R35, and a choice of three desserts. The six lunch starters and main courses cost R195, served in groups of two. There is no choice within the six courses. 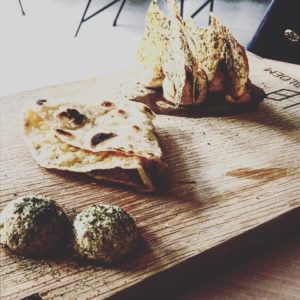 The recipes are inspired by Chef André’s grandmother, Jane told us. When I recited my list of five dietary requirements to Jane, she looked worried, telling me that garlic is the base ingredient of all the dishes. As I am refocusing on losing weight, I compromised in not ordering the tasting menu, sharing two of Aurélie’s dishes, and ordering the koesister dessert.

We had declined the bread course but two dishes arrived for it nevertheless, a regular one with garlic roti, seaweed butter, smoked salmon pâté, teriyaki glaze, and samoosa crisps with fennel, sesame, and sunflower seeds; and for me a garlic-less roti and crisps with sesame, sunflower, fennel, pumpkin, and cumin seeds, the latter seeds giving the crisps a more-ish taste. This was a surprise generous touch, being told that we 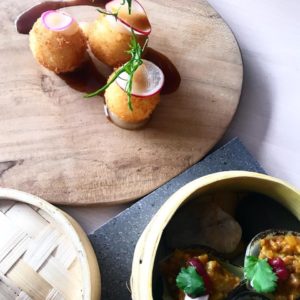 would not be charged for this.

The generosity continued, when the first set of two dishes arrived, for Aurélie Boerenkaas croquettes, Teriyaki glaze, apple purée; and Cape Malay caramelised onion, pickled aubergine, pomegranate, goat milk yoghurt, and cleverly infused Cape Malay spices which had been lit on a tile, and wafted through 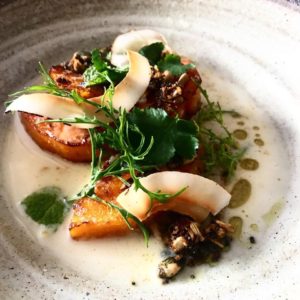 the bamboo container into the dish. I received a dish of Boerenkaas croquettes with radish slices and topped with chervil French parsley, croquettes a speciality of La Mouette.

Courses three and four were shared between 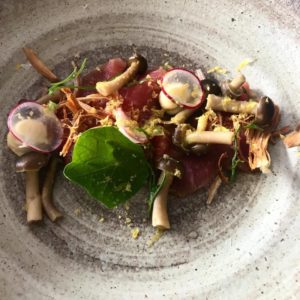 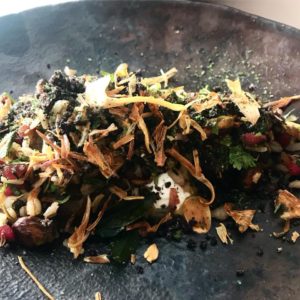 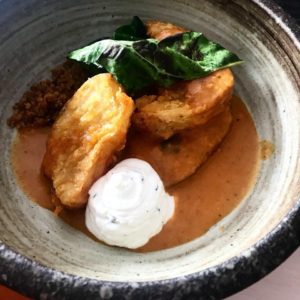 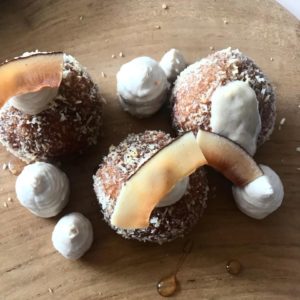 My dessert was a Cape Malay koesister, with coconut flakes, and topped with coffee Crème, on which coconut shards had been placed, but the slightly warm koesister caused the Crème to melt and hence the coconut to slip down onto the wooden board (R40). My dry cappuccino was perfectly made, and served in a beautiful black cup and saucer, with a white rim. Frozen naartjie curd and curry leaf (R40), and Caramèlia toffee apple and nut cluster (R50) were the two alternate dessert options.

Service is personal and attentive. When I found that my pen had leaked in my handbag, and my fingers were full of ink, Jane brought me a bowl of water, a soap dispenser, and a cloth, to clean my hands. Hazel brought me a replacement pen. It was a peaceful setting inside the restaurant, away from the busy Green Point Main Road. I was disappointed with the lack of choice in the starter and main course dishes, not only due to my dietary preferences. Value for money is excellent for the six courses. I was disappointed with the repetition of ingredients in some of the dishes. What is good that we are one step closer to having a proudly South African restaurant in Cape Town, long overdue. The restaurant music does not reflect Cape Town nor the Cape Malay theme.