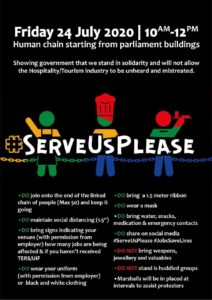 The owners and staff of Restaurants, Coffee shops, and Bars, and related suppliers, will be heading out to the streets twice this week, to protest to the Government and raise awareness about the poor treatment the Restaurant Industry, Tourism Industry, and Hospitality Trade is experiencing, the Curfew and ban on alcohol sales announced by President Cyril Ramaphosa on 12 July being the final straw for an industry that has been most discriminated against during Lockdown in our country.

The President’s Speech: Level 3 retained, Alcohol Sales ban and Curfew announced as of Monday 13 July 2020, a further blow for the Restaurant industry!

Tomorrow, Wednesday 22 July, the restaurant owners will be placing their empty tables and chairs onto the street outside their restaurants around the country, essentially blocking passing traffic, 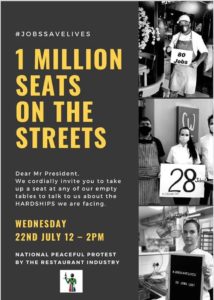 during lunchtime from 12h00 – 14h00. This protest has been organised by the Restaurant Association of South Africa (RASA), with its ‘1 Million Seats on the Streets’ campaign slogan, and a hashtag #jobssavelives. Restaurants have been advised to obtain permission from their local police stations, which from what I have seen and heard is not being granted easily. Restaurant owners have been photographed with posters enumerating the number of staff they have, who with their families depend on their jobs for their livelihoods. These have been posted on Social Media, and sent to journalists as well as to the most senior politicians in our country.

Wendy Alberts from the RASA wrote to restaurants about the protest action tomorrow: ‘We remind everyone that we want to win the hearts and support of our patrons and communities and that it’s a peaceful,protest and most importantly to stay safe and operate in the confines of the law. As much as we want to get our voices heard we need to do it with respect and dignity. We want to talk to the hearts and minds of people and not make people’s days any harder. We want to tell President Ramaphosa of our hardships and how diversified and colourful our industry is and the broader impact in the country and what we need to save our restaurants. We need to create impact not chaos. The protest is about saving jobs, lives, livelihoods, businesses, restaurants’.

RASA attorneys Mooney Ford addressed a letter to President Ramaphosa yesterday, requesting that the alcohol sales ban be revised for restaurants, reminding the President that he had announced a differentiated approach to deal with the areas that have higher levels of Corina infections, so-called 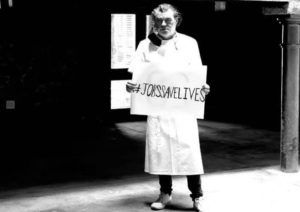 hotspots. It was requested that the restaurants holding a valid liquor licence be allowed to sell alcohol, excluding those located in hotspot areas. Furthermore, selling alcohol by restaurants would have to be accompanied by a food order, to prevent restaurants from turning into bars. A maximum of two drinks per meal should be allowed, and a zero legal drink-driving limit should be set during Lockdown. (Photograph of Chef Liam Tomlin, Owner of Chefs Warehouse Restaurants)

On Friday 24 July staff, owners, and suppliers of restaurants, bars, and coffee shops have been invited to meet outside Parliament, to create a ‘ServeUsPlease’ Human Chain starting at Parliament, through Plein Street, Spin Street, Wale Street, Long Street, up to Kloof Street. The goal of the demonstration is to ‘show Government that we stand in solidarity and will not allow the Hospitality/Tourism industry to be mistreated and unheard.

Protest Participants are requested to bring a 1,5 meter ribbon which they are to use to link themselves to the left and right of the next person, they should bring signs showing where they are from, and how many jobs are being threatened. Participants must wear a mask, and should wear their staff uniform, or dress in black and white.

Below is a summary of all the challenges the Restaurant industry has been subjected to since the beginning of the Lockdown on 27 March, prior to the President’s Speech on 12 July:

Restaurant industry most discriminated against during Covid-19 Lockdown, Court plea to the Government to allow restaurants to serve alcohol on-site with meals!