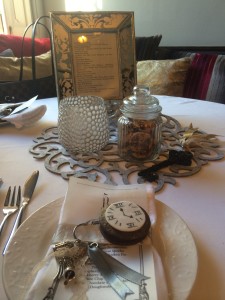 It was an e-mail from the Kove Collection I received about two weeks ago which attracted attention to the new High Tea at 5Rooms Restaurant at The Alphen Hotel in Constantia.  On Thursday my friend Whitney and I went to try out the afternoon tea offering at the Stefan Antoni interior design hotel

Our interaction started off badly, when I first sought information about the High Tea, the Events Manager Nicola Howard not yet having details about what would be served, nor a photograph.  With the intervention of Hotel GM Hannelie Wiese, I received a menu of items to be served, and a photograph, which we blogged about.

I made the booking a day ahead of our planned visit, and this was efficiently taken by the switchboard hostess.  Irritating therefore was the call from Lydia McGrail, the 5Rooms Restaurant Manager, who called on the morning of our booking, to check our booking, less than 24 hours 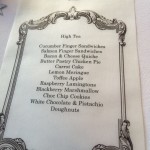 after it was made!  She is clearly from the UK, and I  struggled to understand her, due to her broad British dialect, and a bad line, which meant that she called twice.  Then she made Hannelie call me, to sort out any problems ahead of our arrival, which was an irritation, as such confirmation calls are intended as ‘a courtesy‘, Hannelie explained, but I said that it makes one feel distrusted

and that one does not have manners.  I promised her that I would never not arrive for a booking! Hannelie ended off her call by saying  that I would really be impressed with the service from Lydia, as all their guests feed back.  When I heard this ‘hotelspeak’, I wanted to laugh, being sceptical already.

We did not see nor have Lydia acknowledge our presence until right at the end, when she brought me a card with her surname on it (without her first name) on request, as the hotel receptionist did not have it in her system.  She did not greet us, nor introduce herself, nor check whether we were happy with the service and offering, but sat at the 5Rooms bar counter working on her laptop, ignoring us completely!  We were impressed that Hannelie took the time to chat to us, but she clearly was in a hurry, as she did not request any feedback either. Hannelie manages both The Alphen and The Marly in Camps Bay, the latter being without a GM. Our initial waiter Thomas was clearly not experienced nor worthy of the Hotel’s 5-star rating, and we were told that he had only been working there for about three months. His colleague Richard was  impressive, having worked at the hotel since it opened 18 months ago.

We sat in what was originally the Blue Room, but now has been painted white, and contains a collection of portraits of famous 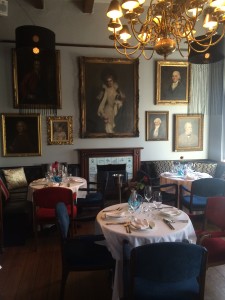 visitors to The Alphen in its 300 year history, including Lord Charles Somerset, Dr James Barrie,  Napoleon Bonaparte, and many more, of which Richard knew most of the names.  We were told by Richard that their first High Tea on Sunday had been disappointing, two bookings of ten guests in total having been a no-show, which may explain why I was put through the irritatimg confirmation drill, being ‘standard procedure‘, I was told!

I showed Whitney the five rooms of the restaurant, and was grateful that our table had been set up in the ‘Blue Room’.  A centre piece was a grey ‘cut out’ which Whitney used to have at her restaurant too, with a display of items which were meant to make us go back in time, we surmised, with a key and ribbon, and a blingy chain with charms on a ‘bracelet’ around our material serviette, a bowl of sugar cubes, a jar of choc chip biscuits, and a macaroon with an edible ‘face’ of an old pocket watch which fell off as soon as I touched it. There were no flowers on the table, which would have been a nice touch.

A nicely designed small grey sheet listed all the High Tea items, while a host of different Specialty Tea flavours was presented in an ornate silver frame, marked at R25 each.  Whitney chose ‘Source of Happiness‘ apple tea, but she had to switch to Rooibos tea when the tea was so weak, even after a 3 minute draw time, and an extra portion of tea added, saying it tasted like water!  Despite pointing out the problem with the tea, we were charged extra for the Speciality Tea!  There was no request for my order of beverage, and I had to ask for a cappuccino. From Richard’s spontaneous sharing of their bad cancellation start on Sunday, and the poor service we had to endure from Thomas, it was evident that we were the first paying guinea pigs of the High Tea.  There was no explanation of how the High Tea worked, and the treats were meant to be served sequentially, according to the information I had received by e-mail initially but all arrived at the same time. Thomas did not know the name of the High Tea elements, and we worked them out from the list.  Hannelie brought a plate of scones with cream and jam as well (without butter), which is not on the High Tea menu. 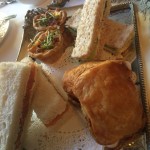 We started off with the finger slices of white bread with salmon and cucumber, one for each of us. No dietary requirements were checked when we booked nor on arrival, so Whitney asked for low Carb bread, which Richard organised, with the same sandwiches coming on gluten-free bread, which were much more tasty. The tiny bacon and cheese quiche, and a chicken pie with crispy butter pastry completed the savoury 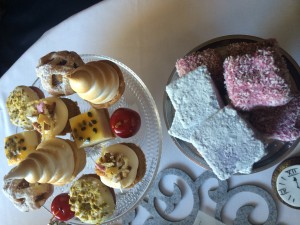 offering. It was disappointing that almost all the sweet treats were similar to those which are sold in La Belle Café and Bakery, also part of The Alphen (and of which a branch has just opened in one half of what was Umi in Camps Bay earlier this week), presented for the High Tea in a miniature size.  I had seen the apple pie at La Belle, so was happy that it was part of our High Tea.  The raspberry Lamingtons were disappointing, and the purple colour of the Blackberry Marshmallows was off-putting, and had no taste.  The scones were disappointingly dry, and the jam and cream offered for four scones was not enough, not even for two! The mini toffee apples were a nice colour splash; the meringue of the lemon meringue had a soft centre; the mini carrot cakes were decorated with miniature edible butterflies; and the miniature white chocolate and pistachio doughnuts were a little dry.

Hannelie was quite defensive when we spoke about High Teas in Cape Town, saying that the Alphen Hotel’s is good value at R185, when I said it was on the expensive side.  The Mount Nelson Hotel offers an unlimited supply of food, and costs R220, which includes speciality teas and coffees, and is the High Tea benchmark for most in Cape Town.  Manna Bay Boutique Hotel charges R195, and it offers Graham Beck MCC as part of the disappointing limited food offering, with tea and coffee, and has a complicated booking procedure too.  The Table Bay Hotel offers different packages, ranging between R100 – R200, over-promising and under-delivering!   The Cape Grace hotel has a very limited afternoon tea offering, at R75. The best Afternoon Tea I have been to in Cape Town to date is that of the One&Only Cape Town, originally disappointing and confusing, but now a buffet offered seven days a week, with a beautiful supply of sweet treats in particular, and costs R185 too, inclusive of tea and coffee.

The booking confirmation calls earlier in the day for our High Tea at The Alphen experience was off-putting, especially when Lydia decided to ignore our presence whilst we were there, unacceptable behaviour, given that there was only one other table with guests in another room, and she was not looking after those guests either.  Richard took over our table from Thomas midway, and it was a pleasure to see how much he likes his job, how much he knows, and how well he spoke. The High Tea at 5Rooms is blingy, and a disappointment in its poor service, poor Speciality Tea, and boring presentation of its items!  None of the staff seemed to care about feedback about its latest offering at The Alphen!