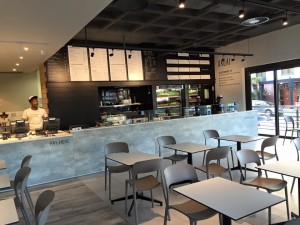 In May Real Foods (Pty) Ltd, the company which owns Nü Health Food Café, bought all 154 KAUAI stores, 85 of which are inside Virgin Active gyms. Real Foods is owned by Dean Kowarski and Genesis Capital Partners, and was established two years ago, re-establishing KAUAI as ‘healthy fast casual restaurants’ as opposed to the former ‘healthy quick service restaurants’. Produce is sourced from farms with sustainable practices, sourcing the ‘best quality local fresh produce’. Some KAUAI stores may be transformed into Nü Health Food Cafés.

The new KAUAI store could not look more different to all past KAUAI stores. The green interior has changed to a neutral natural beige and grey, the healthy vegetables and fruits giving the splashes of color in the outlet. ‘Inspired by this clean line simplicity, the new KAUAI store exudes honesty‘, states the release.  The store looks clean, neat, and spacious, inviting one to sit down, whereas it was more take-away orientated in the past.  The back wall against which the menu is posted is in black, and is well-lit, but the type size of the menu is small, making it heard to read.  They do have small ‘Take Away Menus‘ on the counter, which one can peruse.

The new pay-off line is ‘Made Naturally, Served Happily‘, which I can attest to, the staff being very friendly. The release promises that the staff 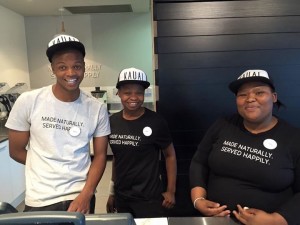 have been trained to reflect the ‘refreshed KAUAI personality’.

I saw the staff prepare my Flu Shot of ginger, lemon juice, and cayenne pepper, at a cost of R10. It made me sweat out my flu 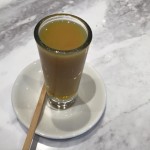 bug about an hour later! I had a berry smoothie too, in a take-away plastic cup, costing R30 for the small size. The staff proudly wear T-shirts with the slogan.

The fridges contain boxes of greenery, labelled as kale, rocket, butter lettuce, cos, house greens, and baby spinach. Another fridge section is labeled ‘Fruit & Veg’, with 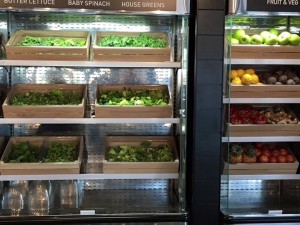 The new focus of KAUAI is ‘Customise It‘, inviting customers to decide how they want to build their meal.  First they are invited to choose if they want to eat a wrap, a 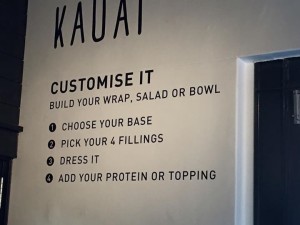 salad, or a bowl; then one chooses the base (house greens, or kale, spinach, rocket, or cos, or quinoa and brown rice); then one is invited to choose 4 fillings from the prepped bowls (including rosa tomatoes, roasted beetroot, roasted butternut, raw corn, red pepper, marrows, salsa, celery, jalapeños, radishes, pickled ginger, cabbage, mint, and more); then you add a seed mix of sesame seeds, cashew nuts, almonds or multi grain tortilla chips for ‘crunch‘; and then it is dressed (blue cheese, olive oil, balsamic vinegar, vinaigrette, lemon, and more dressings); and, finally, one adds one’s protein or topping (e.g. roast chicken, smoked trout, avocado, cheddar cheese, goat’s cheese, feta, local ‘Parmesan’).  The preparation is done in front of clients, and reflects ‘transparency‘ and enhances the customers’ ‘in-store experience’, the release promises, and is ‘nutritional theatre‘. The cost is R40 per dish, prior to adding the protein or topping (egg, a quarter avocado, and feta costing R5 each, while free range roast chicken costs R22, and Franschhoek smoked trout R35). 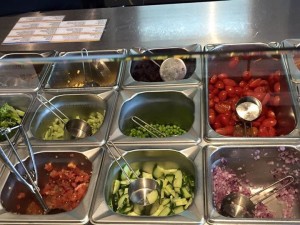 The menu does list specific combinations of ingredients, if one does not want to ‘Customise It‘! Wraps with roast chicken or goat’s cheese cost around R55; ‘Signature Wraps’ are more expensive, closer to R75; and ‘Signature Dishes’ range in price from R55 for a Grass Roots Salad to R89 for a Cobb salad, containing roast chicken, boiled egg, raw corn, and avocado. Smoothies have interesting names, and even more interesting ingredients (such as a ‘Peanut Butter Bomb‘, with ‘banana, cocoa, yoghurt, milk, sugar-free peanut butter, whey protein[sourced from grass-fed cows]’ costing R40 for a Small, and R45 for a Large). Fruit and vegetable smoothies cost R30 for Small and R 35 for Large. Superfood Smoothies are more expensive, and contain acai, goji berries, hemp seeds, spirulina, coconut water, cayenne pepper, and other interesting ingredients. Raw juices are cleverly named : ‘CBC‘ for carrots, beetroot, and celery; ‘Heart Beet’ for apple, beetroot, cucumber, lemon, and mint; and Frozen yoghurt is ‘low gi vanilla’. Breakfast is served until 12h00, and includes omelettes, wraps, scrambled eggs, Bircher Müsli, and rolled oats.

Interesting is that the media release refers to the ‘launch of its real food revolution‘, sounding like Professor Tim Noakes language, and 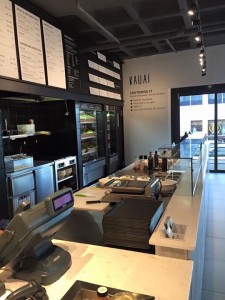 feedback I have seen reflects that KAUAI has reduced the sugar levels of its juices and smoothies, obviously to reflect the Banting craze that has taken over the country for more than a year. The language is flowery in the release: ‘KAUAI introduced its ‘real food’ revolution with the unveiling of its new CI, new store look and feel, fresh new menu and customer experience at the opening of the new concept stores in Gauteng in July. Now, a whole array of the brand’s new ideas, designed to give customers a unique ‘nutritional theatre’ experience, will be found in the most photogenic city in the world, the City of Cape Town‘. 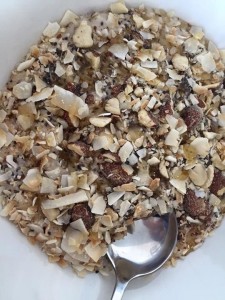 This morning I returned to KAUAI, to have a meal, to complete this Blogpost. It was very busy, and the service from the payment taker was not good, scrunching up my credit card slip before he realised that it belonged to me. I received an (unordered) red cappuccino from the regional manager Adrian. I enjoyed another Berry smoothie (R30), but was disappointed with the Bircher’s Müsli, (R40), which I had looked forward to, being a childhood treat. It had no apples, one of the foundations of this breakfast dish. I told Adrian about it, and he removed the dish, with a cash refund, instead of fixing the dish. Maybe it was a good thing, as it was a very large portion. I had barely received the Müsli when the scrambled eggs (free-range from the lovely orange colour) arrived as well, meaning that there is no co-ordination in the kitchen if one orders more than one dish! They took the egg plate back until we had sorted out the Müsli problem. 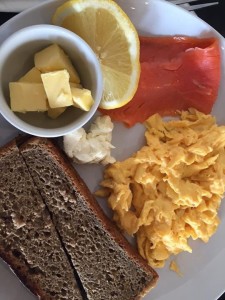 The scrambled eggs came with a hearty portion of smoked Franschhoek trout, half a lemon (a nice touch), sour cream, a generous portion of hand-cut butter (well done), and two slices of toasted 100% rye bread, which had a cloying mouth-feel. Adrian explained that they source the branded Deli Bread pre-baked from France via Bidvest, and then bake it in the store. Given the sustainability claims in the media release, this appears distinctly 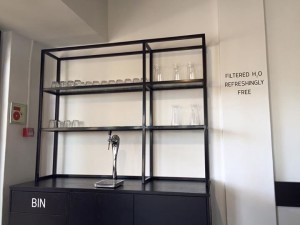 non-Proudly SA! I did like the filtered water station in the store, which I had not noticed earlier this week. I did not like the ‘free-range’ dog brought in by one of the customers, with no reaction from the manager.

Samantha from KAUAI’s Marketing department was in the store, and she managed the order for me. She kindly handed me a goody bag that she had in the store for a 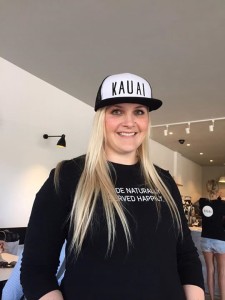 promotion she was running, having missed out on the launch earlier in the week. It was terribly loud today, with 10 staff behind the counter talking at the top of their voices, shouting at each other across the store, without any control by the manager. A nation-wide KAUAI-store music-broadcast was too loud, and the music dreadful! Staff making up orders wore gloves, I noticed.

The new KAUAI menu is being introduced in stores around the country, and the design changes will follow.  I posted my photographs of the new concept store on my Facebook page, as well as on the Facebook page Cape Town Restaurants – the good, the bad, and the nastyyyy…, and they were generally met with positive feedback of the design changes.  By contrast, on the similar Facebook page Durban Restaurants – the good, the bad, and the nastyyyy, the KAUAI menu changes have been slated, clearly being very different, and having become far more expensive, many writing that they will not return. The KAUAI App allows one to buy one Smoothie free for every 12 bought.

Disclosure: The goody bag I received from Samantha contained a KAUAI cap, a KAUAI glass bottle with rubber grip, and two R50 vouchers.