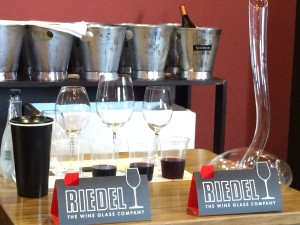 I sat next to The Reciprocal Wine Trading Company Cape Town representative Tarryn Thomas at the ‘Chefs who Share‘ Gala Dinner last week, and she invited me to attend the special tasting of wines in the Riedel glassware which they represent in South Africa.  The tasting on Tuesday at The Local Grill function venue was made more special in that it was led by 10th generation Georg Riedel, currently heading up the Austrian-based company. Herr Riedel encouraged the restaurant managers and sommeliers present to invest in glassware and a glass washing machine to bring out the best in the wines they serve.

We were welcomed by Michael Fridjhon, owner of Reciprocal, and he introduced Herr Riedel.  It was the first time that I met Michael, and sat next to him during 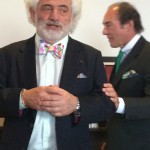 the tasting.   I had brought my glass of water into the venue, and was quickly told to put it away, and we were all told that we should not open the bottle of water on the tasting sheet nor taste anything before we were given the go-ahead by Herr Riedel to do so.

Herr Riedel led us to question what makes a restaurant visit successful, the welcome, the food, and the wine selection combined making the cost seem good value or not. Eating at a restaurant is a ‘multi-layered symphony’, he said, to describe the functional and emotional experience of eating out.  He feels that wine lovers will order a different (i.e. more expensive) category of wines if the appropriate glassware is on the table. 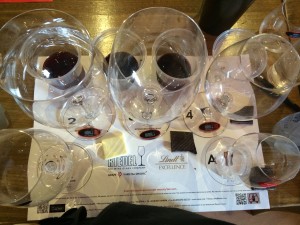 We had three main glasses, the first being the Riedel Sommeliers Restaurant Bordeaux Grand Cru glass having a large bowl, it being a 1958 design, with a lip, made from machine-blown lead crystal, which vibrated when we clinked the glass with our table neighbour, without any liquid in it.  The second was the Riedel Sommeliers Restaurant Burgundy Grand Cru.   The third was the Vinum XL Restaurant Range Hermitage glass, which costs half the price of the Sommelier Restaurant range.

Each of the glasses is designed differently, moving the liquid one is tasting to a specific part of one’s mouth, either right to the back of the palate, or to the front of one’s tongue.  We tasted water first, pouring it from a bottle supplied into each of the three glass types, and there was a clear difference in the tasting experience. The Burgundy Grand Cru and Hermitage were classed as poor water drinking glasses.

It was then the time to taste the effect of the stemware on wine.  Michael introduced the first wine, a Creation Pinot Noir 2013, of which we poured equal amounts into the three glass styles.  As we tasted the Pinot Noir in the three glasses, the colour changed 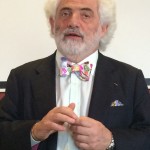 (from red, to green, to grey); from an aroma of cherries and raspberry, to ‘green stemminess‘, and to soil, minerality, and cloves; a fantastic balance in the Burgundy Grand Cru glass, which pushes the bitterness to the back of the mouth and keeps the acidity in the front; a green herbaceous taste in the Bordeaux Grand Cru glass, and a salty taste in the Hermitage glass.  To prove that food and wine combined effects the taste of the wine, the Pinot Noir was paired with Lindt white chocolate, the chocolate company (providing the ‘software‘) being a world-wide partner of Riedel (providing the ‘hardware‘).  While the white chocolate had quite a bland taste, it came alive when paired with the Pinot Noir in the Burgundy Grand Cru glass.  Paired with the Pinot Noir in the other two Riedel glasses, the white chocolate tasted sour and bitter. 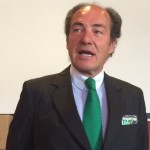 We repeated this exercise with De Grendel Shiraz 2012.  In the Bordeaux Grand Cru glass it had a yeast aroma; in the Burgundy Grand Cru glass there were more floral notes, which is not Syrah, Herr Riedel said, with ‘very intense tannins’ and being ‘uncharming‘.  In the Hermitage glass liquorice notes were picked up, and gave ‘good management of the flavour profile’.  The glass made the sweetness move forward, giving it well-roundedness and balance.  The pairing with the Lindt Chilli chocolate enhanced the ‘aural burn’.

For the Jordan Cabernet Sauvignon 2011 the tannins had to be addressed, in making them softer and pushing them to the centre and front of the tongue, giving us herbaceous, green eucalyptus.  In the wrong glass the Cabernet Sauvignon had a burning taste at the back of the palate.  In the Bordeaux Grand Cru glass  the wine looked darker, and the aromas and tannins softened, Herr Riedel referring to them as ‘sandy tannins‘.  The glass improved the wine even further, giving good fruit notes. Paired with the 70% dark chocolate, it was a ‘combination made in heaven‘, bringing out black currant in the wine.

Most interesting was the tasting in the specially designed Coca Cola glass, which Riedel had crafted for the soft drink company in 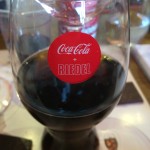 Atlanta earlier this year. Identifying that the effervescence creates an astringent and sour taste, the soft drink tasted soft in the tongue, the effervescence had almost disappeared, and the aroma had changed to a light orange, the sweet taste being de-emphasised.  The Coca Cola tasting was paired with Lindt dark chocolate and orange peel.

Herr Riedel made a number of observations about our wine industry while he did the presentation, such as South Africa producing the best Chardonnays in the world; that Pinotage is becoming less visible on local restaurant winelists; Creation especially but the Hermanus Wine Route generally produces excellent Pinot Noir; and that Pinot Noir is the ideal wine to drink with food, providing the best match.  He said that Cabernet Sauvignon is popular for it sweet structure and longevity, which works well with our palate.  Herr Riedel was a tough tasting taskmaster, and shared that he makes ‘people nervous’ (we assume in restaurants) with his requirement to chill red wine, cooling it in an ice bucket.

I had previously attended a presentation which Tarryn had done at I ♥ my Laundry, using Radford Dale wines, and I was sold on the concept then already.  It was no surprise that the result was the same, the ‘physics’ of the glasses creating emotion in tasting, enhancing the very good wines one drinks from them.

Disclosure:  We were generously invited to take all the glasses on our tasting mat home with us.  Riedel is running a 30% off special until the end of September.