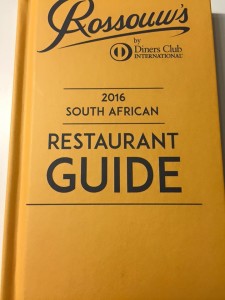 Publishing Editor JP Rossouw showed us the cover of the book briefly when he revealed the new blue cover of the 2016 Platter’s Wine Guide.  That was it! Last year the Restaurant Guide (with twenty 5-star restaurants then) was surprisingly only launched in Johannesburg, when it was run by then-editor Anna Trapido, who left Rossouw’s earlier this year to jump ship to the American Express Platinum Restaurant Awards.

It is immediately evident that the system of evaluation has changed, restaurants now rated in one of three categories: Highly Recommended, Recommended, and listed but with no rating evaluation! There is therefore no comparison with results from previous years. The methodology too has changed: Rossouw’s subscribers via Facebook and its website, as well as Diners Club members, a 1000 respondents collectively, were asked to ‘say about your favorite eateries’. Rossouw’s visited restaurants too, unannounced and with bills paid. ‘Establishments that were identified as favorites were flagged with a ‘recommended’ tag and those that really stood out from the rest received a ‘highly recommended’ tag. These are South Africa’s best restaurants overall – and not only in the ‘fine dining’ style‘.

Rossouw found a high overlap between what were the public’s ‘Best of‘ and those restaurants rated most highly by the Rossouw’s reviewers, suggesting ‘that the one quality that better restaurants have is consistency‘.

It is a shock to see that Hartford House is not included in the Highly Recommended list, given the excellent work which its new Chef Constantijn Hahndiek is doing there, receiving Recommended only. A bigger surprise even, but reflecting Eat Out‘s Top 20 exclusion, is that both Franschhoek restaurants Grande Provence and Pierneef à la Motte did not receive a rating at all!

A surprise is to see Ile de Pain on the list, which has been closed for the past six months due to a devastating fire, and will remain closed for another six months or longer while the restaurant is being rebuilt!; Bread & Wine, which did not receive a nod from Eat Out this year; Aubergine has not been recognized by Eat Out for a while, while Carne and Bombay Brasserie are a surprise too!  Burrata has a Highly Recommended in the Guide, but is not listed in the Media Release!  Reuben’s restaurant in Paternoster is not noted in the Guide. The errors detract from the credibility of the Rossouw’s Guide!

POSTSCRIPT 1/11: I have had more time to take a second look at the Rossouw’s Restaurant Guide, and can make more comments: