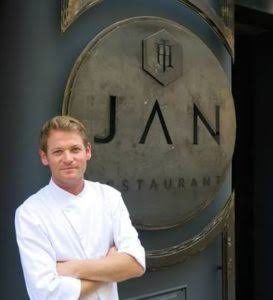 JAN Restaurant is our country’s best restaurant, despite it being based in Nice, not only in serving traditional South African dishes in fine din8ng style, but also in being the only South African Michelin-star restaurant. Yesterday JAN Restaurant received one Michelin star for the fourth year running!

In 2015 I read about JAN Restaurant and its owner Chef Jan-Hendrik van der Westhuizen on Facebook for the first time. In that year the restaurant had been awarded a Michelin knife and fork for the first time, an entry-level award recognising that a restaurant has the potential to progress further, to Michelin star recognition. In 2016, and every year thereafter, JAN Restaurant has been awarded a Michelin one-star. The French Michelin star award recipients were announced yesterday, a week earlier, usually announced on or around 1 February. It would appear that Chef Jan-Hendrik 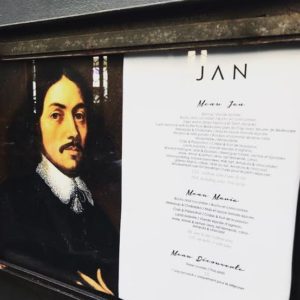 I first ate at JAN Restaurant in June 2015, and every year since then I have eaten at JAN Restaurant at least once a year. I have seen the restaurant grow in its South Africaness, and Chef Jan-Hendrik just seems to be prouder and prouder of his South African roots, in its decor and his menu offering. He serves biltong butter, mosbolletjiebrood, Cape seedloaf, kaaiings, amazi, Malva tart, melktert, Sweetie Pies, Kerkbasaar pannekoek, amongst others, and even offers a packet of Beskuit as a take-home gift. I last ate at JAN Restaurant in June 2018, celebrating the completion of writing my second book, ‘SwitchBitch: My journey of transformation in walking the Camino, Sole to Soul’. I had 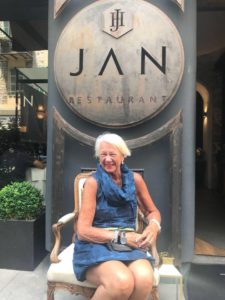 written it in Apricale, a little Italian Village about an hour from Nice, Chef Jan-Hendrik’s favorite escape place, to which I was introduced by him in 2015. Apricale was the setting of the first JAN TV series (he is working on the second series), and he also takes food groups to the village.

In addition to his cookbooks, Chef Jan-Hendrik has published two volumes of ‘JAN the Journal’, reflecting what a hard-working, dedicated, focused, and busy chef he is. Chef Jan-Hendrik announced at his TV series launch that he would open a restaurant in our country, but has been mum on the topic. While speculation was rife that it would be in Cape Town or the Winelands, rumour has it that it will be located in an exclusive game reserve in the other end of the country. In Nice he launched MARIA across the road from JAN restaurant last year.

All the reviews of my meals at JAN Restaurant as well as summaries of the JAN TV series episodes are in my SwitchBitch Book 2.