Welcoming the guests attending the Christian Eedes Cabernet Sauvignon Report 2013 at Burrata on Thursday, sponsor Sanlam Private Investments CEO Daniël Kriel said that South African wine drinkers should thank our winemakers for producing such good quality wines at affordable prices. It was the second year in which the Christian Eedes Cabernet Sauvignon Report was presented.

Kriel said he had done a Google search about Cabernet Sauvignon, and to his surprise found that Wikipedia did not mention South Africa in its first paragraph.  He learnt about the wide range of terroirs and climates in which the grape variety is grown, from Canada down to the 15° latitude in Argentina.  South Africa is only referred to in the New World wines section, and then only Stellenbosch and Constantia are mentioned.  He referred to the markets being in terrible chaos on Thursday, and he was happy to escape the office to not see what was happening on his computer screen.  Having recently been to New York, and paying $89 for a reasonable Californian, he said that we should be grateful for the affordable and good quality wines which our winemakers produce.  He justified the investment by Sanlam Private 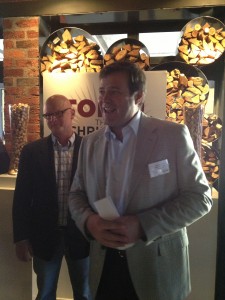 Investment in The Christian Eedes Cabernet Sauvignon Report in that their clients love wine and have a passion for them, as do the leaders of businesses!

Christian Eedes thanked the wine writers present for spreading the word about his 2012 Cabernet Sauvignon Report, allowing him to renew the relationship with his sponsor.  Using the same judges Roland Peens of Wine Cellar and James Pietersen of Balducci’s, sixty Cabernet Sauvignons were evaluated.  He announced that Wade Bales has put together a special Cabernet Sauvignon Top 10 pack, based on Eedes’ Report results. Bales could not tell me how much he will charge for the special pack.

In introducing the Top 10 list, Eedes said that the 5 point scale had been used for the ratings (instead of the 100 score which he has recently moved to for his wine evaluations), and that within a star band, the estates are listed alphabetically on his Top 10 list. The panel had found the local Cabernet Sauvignons, the second most planted varietal locally, ‘on the whole, very impressive in quality…characterised by richness and weight‘.  He added that while Cabernet Sauvignon ages well mainly due to its high level of tannins, wine drinkers are placing less value on this characteristic. ‘Winemakers seem to be going to great lengths to emphasise fruit and the resulting wines are tending to be ever riper, sweeter and more alcoholic.  The best examples display fruit concentration but retain shape and form’.  The panel had found some ‘clumsy addition of tartaric acidity‘, done to add freshness, but it resulted in sourness in some instances. 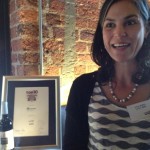 Burrata served a selection of tasty canapés, including porcini and cheese sticks; sirloin and 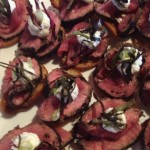 radicchio crostini; fried crumbed smoked mozzarella, short rib and red pepper risotto balls; and toasted brioche with chorizo, green olive and mint purée.  The restaurant had been cleared of all its table and chairs, to allow the top ten Cabernet Sauvignons to be set up for tasting after the announcement of the top achievers.

It was a treat to catch up with a small select group of ten winemakers, and share their news.  Erika Obermeyer was still excited about her recent trip on the Queen Mary 2 from Durban to Cape Town, spending one day giving lectures to the cruise guests. Irene Waller was excited for Franschhoek (she heads up the local Vignerons association) that two of the top 10 Cabernet Sauvignons are from the wine valley, which is receiving increasing recognition.

Disclosure: We received a bottle of Graham Beck The Coffeestone Cabernet 2011 as part of the media pack.