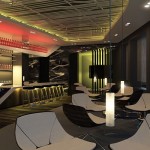 Salt Deli, a sister coffee shop to the Salt restaurant at the Ambassador Hotel on Victoria Road in Bantry Bay, operated on its second day to total shambles, not being able to cope with being full.   It is a bad reflection on the Salt and Ambassador Hotel brands.

The Deli upset most of its clients who were not served for up to half an hour, and who sat at tables with dirty dishes.  To make a point, two clients got up and played “waiter”, clearing the outside tables.  Other clients went inside to fetch their orders themselves.  Some just left without being served!

When the Assistant Manager came to take the order, she informed us at 12h00 that the deli had run out of food, and that they were only taking beverage orders.   She was able to organise a croissant with cheese and ham, according to the menu, but it came “deconstructed”, without butter, in that one had to make it up oneself (costing R35!).  The cheese slices looked a few days old and dry.   While we were sitting there, we saw the Rosa’s Bakery van doing a delivery, spoiling the illusion that everything is prepared and baked at Salt Restaurant across the road.

A further disappointment was that no cooked breakfasts are served at Salt Deli at all, as they have no proper kitchen, it just being a “satellite kitchen” to the restaurant, the Assistant Manager explained.

For the amount of money that the Ambassador Hotel must have put into the renovation of the Deli, previously Carlucci’s, in appointing Stefan Antoni as the architect and interior design company, it is a shame that they were so badly understaffed and understocked.   The interior design quirks (a pile of wood with a top is the desk, the flooring is made up of a mixture of slate, wood and tile, and the ceiling in part has a wooden crate look) pale into insignificance when one experiences such chaos and poor service.  No management was visible from the Ambassador Hotel, to assist the obviously new staff in coping with the full Deli.

The menu is disappointing, given that Eat Out Top 10 chef Jacques de Jager from Grande Provence will be joining Salt next month.   Breakfast options are yoghurt and berries, bagel and cream cheese (with or without salmon), muffin and preserve, and smoked ham and gouda croissant (as described above).

Salads range from R 45 – R 65, and include nicoise, caesar, caprese, chicken and salmon.   Three types of wraps are offered, as are three types of unexciting sandwiches, three basic pasta dishes, soup (in summer!), a tart, tapas (including oysters, olives, parma ham and melon, smoked salmon) and cheese, meat and Mediterranean platters.  It was good that the planned oyster and champagne bar upstairs has not yet opened, as this would have caused even greater problems.

The management of Salt Deli should close it until they can train their staff properly, can appoint more staff, and have a better supply of ingredients needed to make the dishes they offer on their menu.   The overall experience as well as menu was a disappointment, relative to the pre-opening hype.   One may say that a new restaurant should not be judged in its opening days, but it should not open if it is not ready to do so.  The opening day had been delayed a number of times in the past 2 weeks.

Response from Neil Markovitz, MD of Newmark Hotels, owner of the Ambassador Hotel, and Salt restaurant and deli: “Thanks for the mail yesterday. Clearly a disaster as you have described. I am told that the lunch service went a bit smoother and a complete post mortem of the days disaster was discussed and analysed in full. Opening on boxing day was clearly not the best idea, but then again opening on in December was always going to put us under tremendous pressure.   Absolutely no excuse though and I apologise for the experience. We will get it right.   There is a problem on the that side of the road with extraction at the moment and the hence no cooked breakfast. This is something we are working on but a bigger problem to solve.”