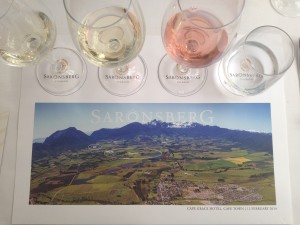 For the first time in the ten years of wine production, Saronsberg invited a group of wine writers to a tasting of its wines, followed by lunch at the Cape Grace Hotel.   Saronsberg, with Rijks, is synonymous with Tulbagh.

Saronsberg was bought by Nick van Huyssteen in 2002, previously being the Twee Jonge Gezellen farms, which they renamed after the mountain in the area.  A year later a large part of the then fruit 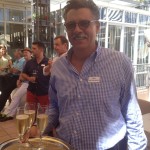 farm was destroyed by a fire, making them start from scratch and planting vineyards on 51 hectare of the farm, making Nick’s dream of a wine farm come true, necessitating the building of a cellar.  The day-time heat in Tulbagh was taken into consideration in the design of the cellar, we were told, to cool things down. Two years later they made the first wines.

It was the wedding of a niece three years ago that brought me to spend a weekend in Tulbagh.  We had bad luck with our accommodation at Rijk’s and Manley’s, and the restaurants in the village.  A highlight however was the visit to the Saronsberg tasting room and its impressive art gallery in the tasting building and outside it, although the tasting room staff did not volunteer any information about their wines.

We met at the pool area of the hotel, and Nick was the perfect host in finding a glass of their MCC Brut 2009.  He told me that there are seven family members with the same name and surname, all of 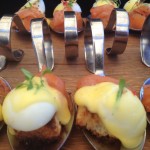 whom are related, which causes some confusion.   The Cape Grace served Salmon Eggs Benedict canapés at the pool side. Dewaldt Heyns is the winemaker, and he eloquently talked us through the ten wines we tasted.  When he first arrived in Tulbagh, he spoke to Rijk’s about the wine cultivars that do well in Tulbagh, and he was advised to plant Shiraz and Pinotage.  He said that the past ten years have been amazing, and they ‘hit the ground running’.  They have become particularly known for their Shiraz, which ‘performs phenomenally‘, attributing their success to attention to detail. He is grateful for his hard-working staff.    The farm has a diversity of terroir, altitudes, soil types, and temperatures.  More than 20000 cases are sold a year, of which 70% are red wines and 30% white wines. 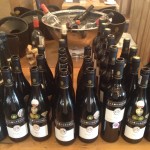 Dewaldt talked us through their range: 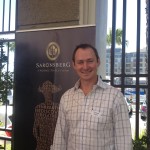 *   Saronsberg MCC 2009: first released in 2007, using their Chardonnay predominantly and only a little Pinot Noir.  It spends up to four years on the lees.  Cost is R120.

*   Saronsberg Sauvignon Blanc 2013:  the style is tropical fruit, and is more suited to food pairing than the more common local style.  A little Semillon was added to cut the acidity. R70

*   Saronsberg Viognier 2012:  this cultivar is usually picked too ripe, Dewaldt said, and has too much oak.  Being a difficult wine to make, Dewaldt went to France to learn.  They pick their grapes earlier, and have made an elegant wine with a delicate perfume, and is the most versatile food wine.  It is kept in oak barrels for 14 months. R90

*   Saronsberg Grenache 2011:  Dewaldt said that their Grenache is a departure from the typical South African style, being ‘a little more aggressive, with purity of fruit, being delicately berry-flavoured, more like a Pinot Noir than a Shiraz‘.  He said it is one of the best wines he has ever made.  They only sell it from the farm, and only make 3000 – 4000 bottles, and only make it if the grape quality is excellent. Cost is R120.

*   Saronsberg Shiraz 2011:   This is their most well-known wine, and is their most consistently performing, according to Dewaldt.  Its elegance has grown over time.  90% of the wine is matured in new French oak.  The diverse soils on the farm give a diversity of flavour profiles to the wine.  It was awarded 5 stars by Platter’s South African Wines 2014 and many other awards. R185

*   Saronsberg Provenance Shiraz:  This is not just a second label wine, Dewaldt said, but is a stand-alone wine with a different identity and flavour profile. It is in oak for about 20 months.  There may be a small amount of Viognier and other components in the wine.   R95

*    Saronsberg Provenance Shiraz Rosé 2013:  a light easy drinking wine, made from Shiraz grapes, which was praised at our tasting table.  R45

In general Dewaldt’s mantra is ‘average is not good enough‘, but acknowledged that luck plays a big role in the making of wines.  Looking back over the past ten yeas, he asked what is next for Saronsberg wines, ‘as one cannot stay static’.   Dewaldt did express a very important goal, and that is to be a Top 10 wine estate in South Africa.

At our tasting table Saronsberg was praised for making very good Bordeaux as well as Rhône-style blends, clearly unusual to have been mentioned.  He shared that they had just started harvesting, three weeks later than usual, due to the very wet winter.  At lunch we chatted about Viogniers, once 89 labels being available, but now vastly reduced, with those by Flagstone, Creation, and Saronsberg being highly rated. 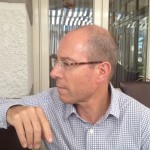 At our tasting table I met Ivan Oertle for the first time, with Swiss roots and the Wine Buyer at Woolworths.  He has worked at the company for 28 years, having been a Food Buyer in the past.  He has been their wine specialist for the past 15 years, doing wine courses as well as buying courses, and is busy with his Master of Wine.  He told me that 15 – 20% of the Woolworths wine range is existing brands, the balance being Woolworths own label wine brands, the latter giving them a better margin.  It also ties in with making the ‘Woolworths difference’, not being ‘me too’.  Almost two thirds of the Woolworths wines are bought by female purchasers, who ‘buy with their eye and on emotion’, Ivan said. Label design therefore is crucial in creating the sale.  They have conducted research on what makes women buy wines, and the key aspects are that the label be attractive and that it does not have any quirky or clever aspects to it, ‘as you will lose them’.  The wine shopper has 40 – 60 seconds to comprehend 400 brands in their wine section, and to make their choice.  He shared that their wines are not necessarily cheaper, Woolworths being the largest seller in the country of Veuve Clicquot at R450 a bottle.  Recently they sold out of Graham Beck Pheasants Run Sauvignon Blanc in just two months, despite the cost of R190 a bottle.

At lunch we were well looked after by the Cape Grace Restaurant Manager Martin Drotsky, who made sure that we had more than enough wine options to pair with our three courses.  The starter 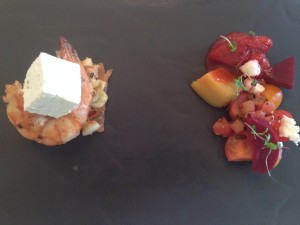 was a marriage of what was originally planned, being smoked salmon trout served with a grilled prawn, lime mousse, pickled ginger, and what was meant to be a crispy kataifi ( a Middle Eastern pastry) but which was not to be found on our plates, with a vegetarian alternative of red and golden baby beets and a tomato salad, served on a slate plate.  This course was paired with Saronsberg Sauvignon Blanc 2013, Saronsberg Viognier 2012, and Saronsberg Provenance Shiraz Rosé 2013, the Rosé pairing particularly well with the tomato part of the dish. 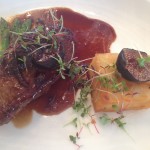 The main course was a Rooibos barbecue basted Chalmar sirloin steak, served with  a potato galette, roasted figs and asparagus.  We found it hard to choose between the Saronsberg Grenache 2011 and Saronsberg Full Circle 2011, both excellent partners for the steak.   For dessert a White chocolate 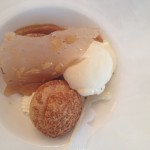 The quality of the Saronsberg wines reflects the meticulous care and detail that owner Nick van Huyssteen has put into his Saronsberg Collection, having invested in Lionel Smit long before he became sought after, and having work by the late Paul du Toit, Angus Taylor, Walter Battiss, Christo Coetzee, Norman Catherine, and Jan Vermeiren.   Visiting Saronsberg when in Tulbagh is an absolute must,  being the most innovative and interesting wine estate in the area.