A week ago I was invited by Silvermist Tasting Room assistant Declan to visit the wine estate next door to La Parada Constantia Nek, being in Constantia every Sunday when I dance to DJ René’s music. On Sunday I took up the invitation, and was lucky to find both winemaker Greg Louw and Declan on the estate, to do the tasting before closing time.

The Silvermist tasting room is small, and is housed in the Green Vine Eatery 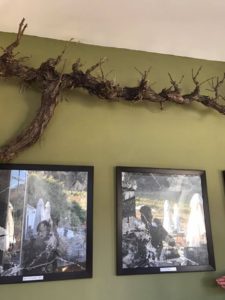 overlooking Constantia. The property is also home to La Colombe restaurant higher up, and the zipline adventure service, which I have seen from a distance when Greg drove me high up on the estate, to show me around last year. The Tasting Room is painted in green, and when tasting one faces aerial photographs of the property, beginning with the 1940s, when the area was just covered in mountain and forests. In the ‘Fifties the Manor House was built illegally by a former owner, and had to be 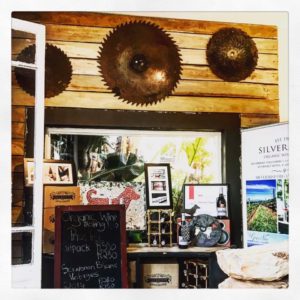 knocked down by the City of Cape Town. In 1984 Greg’s father Alan bought the 22ha property, when the bank had repossessed it, and thirty years later Greg and Alan bought another half, the adjacent property. As Alan is an architect, he found a legal way to rebuild the Manor House, which was originally the Louw family home, and is now a seven suite hotel, which is being renovated and will be relaunched at the start of the Summer later this year.

The first planting was of olives and forests, with the forestry earning revenue as the wood was sold. The wood has been extensively used in creating decks at the Green Vine Eatery, as well as furniture, the tasting room counter top being a solid piece of wood from the estate.  The Tasting Room reflects the saws used to take down the trees o the property,and some rocks from the estate to define its terroir, some containing manganese. A Hanepoot grapevine runs along the length of the wall decoratively.

Greg told me that in 2000 they moved away from farming with olives, and began clearing the 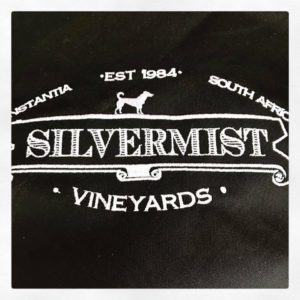 blue gum plantations, being alien trees, planting vineyards on the cleared land. After a B.Comm study via Unisa, Greg went to Elsenburg to study winemaking, followed by one term at the CFPPR agricultural university in France, the oldest in the country. In 2010 they made their first wines. Greg wanted to make a difference, and the vineyards have been managed organically, and the wine made following organic principles too. Initially the wine was made in the cellar of Boekenhoutskloof in Franschhoek, and then at Rustenburg in Stellenbosch. Now the wine is made at the Org de Rac Cellar in Piketberg, making the Silvermist wines truly organic now in accordance with European standards, and therefore can be exported. Greg has taken over a 4ha piece of land at Constantia Mist next to Eagle’s Nest 1km away from Silvermist, and has planted Sauvignon Blanc there according to organic principles too, the grapes from Constantia Mist adding complexity to the Silvermist Sauvignon Blanc.

Rocket was a special gift which Greg received from the late Tim Rands, a good friend of Greg, who was one of the owners of Boekenhoutskloof and who founded Vinimark. She is a loyal best friend to Greg, and does not easily move away from his side. She is the mascot for the Silvermist wines, depicted in 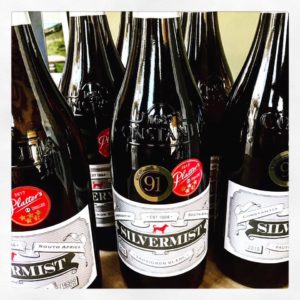 red on every label. The red wine is even named after her.

This year Greg is estimating that they will produce 20000 bottles of Sauvignon Blanc. Greg kindly did a vertical tasting of the Silvermist Sauvignon Blanc, starting with an as yet unlabeled 2016 vintage, working his way to the 2014 vintage. Greg said that his Sauvignon Blanc wines can develop for another five to seven years before being drunk. The Silvermist Sauvignon Blanc contain 23 parts free sulphur, half the amount compared to non-organic wines. Leaves are removed around the grape bunches, and all imperfect grapes are removed. The grapes are hand harvested, and then taken to a Truck cooled down to 4C within 15 minutes of picking, to prevent oxidisation as far as possible. All the wine is stainless steel tank fermented.

The 2016 Silvermist Sauvignon Blanc was bottled in December, a quantity of 14000 bottles. It has white peach, pear, lychee, and floral tones on the nose. It was a warm vintage, and the vines had an open canopy.

2015 was a cooler year, and the vines had a more closed canopy. A total of 16300 bottles was produced. We picked up minerality, citrus, green line, and capsicum on the nose. It has high acidity. It was described by Greg as a typical Constantia wine. Greg referred to it as a ‘rockstar wine‘, which won 41/2 stars in the Platter Guide.

In 2014 14300 bottles were produced, it being a richer more golden wine. It has a soft gentle flavor in the mouth, and gives butterscotch notes. It is in this vintage that the Constantia Mist grapes were 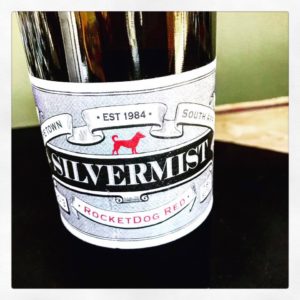 A total of 780 bottles of Rocketdog Red 2013 was produced with a WO Swartland classification, its grapes coming from this region. It is organically made too, and is a blend if 50% Cabernet Sauvignon, 25% Merlot, and 25% Shiraz. The wine is matured in new oak barrels. The nose gives dark red fruit, mainly strawberry with some cumin spice coming from the Shiraz. Declan went to the vineyard to pick some Shiraz berries, the wrinkled ones being perfect for harvesting.

A Silvermist Blanc de Blanc MCC 2013 is soon to be labeled and launched, made from Chardonnay grapes which now have been planted at Silvermist too, and having spent four years on the lees. Greg is very excited about the quality of the MCC. A Silvermist Cabernet Sauvignon has been made in small quantities, and is sold at La Colombe

Greg is a super friendly and passionate winemaker, and impresses with his focus on producing his organically certified Silvermist wines.