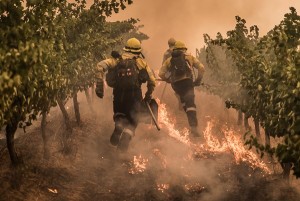 Only ‘a fraction of the total wine production’ will be affected by the devastating wind-fueled fires that blazed on the Simonsberg last week, according to VinPro, reports the office of Alan Winde, Western Cape Minister of Economic Opportunity.

Minister Winde said in a media statement: ‘There are 100000 hectares in the province and a very small portion of that was damaged. It is unfortunate that some of our top wineries were affected. However, I was pleased to hear this week from Kanonkop that there was no structural damage, and as such the fire will have no impact on their bookings and the tourism side of the business. Wine tourism generates R6 billion annually for the national economy and we know our prestigious wine farms are major draw-cards for tourists‘.

He also saluted the fire fighters, farm owners, and farm employees, for their tireless work in minimizing the impact of the fire.

Minister Winde’s office also announced that animal feed will be prepared in Malmesbury, and will be transported by SA Breweries to Klipbrand.