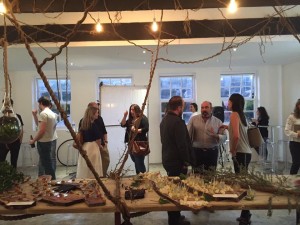 Last night I attended the opening of [spasie] UPSTAIRS on Bree Street, which was celebrated with a fascinating multi-media mix #ROOTS exhibition curated by Caro de Waal of EAT DESIGN.

[spasie] UPSTAIRS is an interactive art gallery by day, 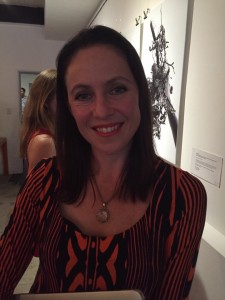 and a premium cocktail lounge at night, promising to be ‘collaborative, collective and colourful’. It joins [spasie] UNDERGROUND, which has been operating from Church Street in Bo-Kaap for two years, on Wednesdays, Thursdays, and Fridays. [spasie] 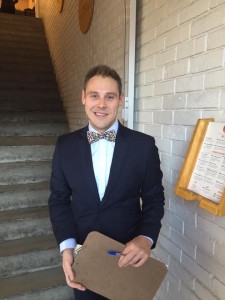 was created by New Yorker Gregory Zeleny. His new UPSTAIRS venture is a collaboration with architect Dean Hoffman. Charlotte van Kradenburg is the new GM of both [spasie] outlets.

Caro de Waal teamed up with [spasie] UPSTAIRS for the opening #ROOTS exhibition, with a mix of nine artists using various media, including photography, video, iPhonography, X-rays, illustrations, and painting to represent the #ROOTS theme, which was also represented in the form of food, drinks, words, and decor.  Explaining her inspiration for the exhibition, Caro explained: ‘I was born here; she fed me, nurtured and watered me. I grew here, Africa is my root….Here I express myself in the way I know best, through food, flavour, art and design’. Caro’s company EAT DESIGN works to merge food, art, and design.

We did not receive any information about the artists, but from the introduction by Caro I managed to get most of the artists’ names: 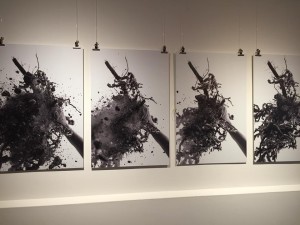 #   Hein van Tonder photographed artichoke roots in black and white, a series of four photographs, for which he and Caro had travelled to Wellington. 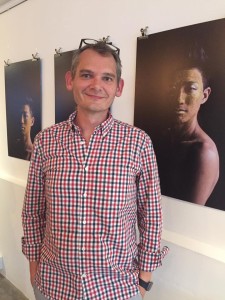 On the trip to Wellington, Hein van Tonder and Caro discussed photographing a person with a Tumeric clay face mask, a series of three photographs, depicting the young man becoming increasingly confident over the series, Hein explained. 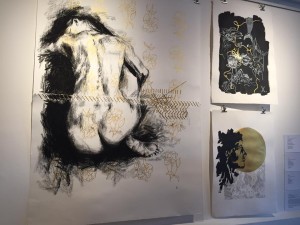 Caro described her as a drawer, painter, and cook.

#   I did not watch the video, and did not get the name of the creator of it. 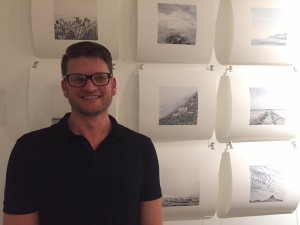 described as an iPhonographer, who uses his iPhone to create colour effects via apps, and he then Instagrams the photographs. They were a collection of Cape Town images, including a spectacular one of Lion’s Head. He surprised me by sharing that his day job is that of an insurance number cruncher!

#   Caro had X-rayed a number of edible roots as well as ‘ancestor roots’ at a radiologist firm, and put them over a light box, some of the X-rays looking like human bones! 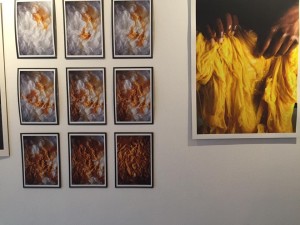 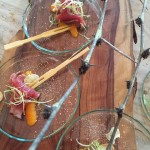 Drinks offered were Gin infused with Rooibos, Absinthe, and Infused vodka. Canapes were created by Vagabond Kitchens, and contained organic and natural ingredients:

#   Angelfish ceviche with numnum, lime, spekboom, radish, and lemon Buchu, served on glass plates, and thorn tree branches formed part of the display of this canapé. 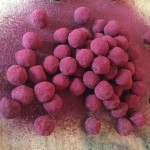 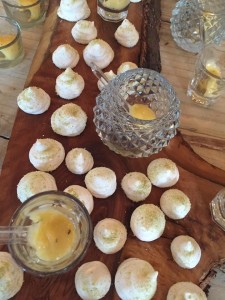 It was exciting being in [spasie] UPSTAIRS, and a high bar has been set with its inaugural exhibition.