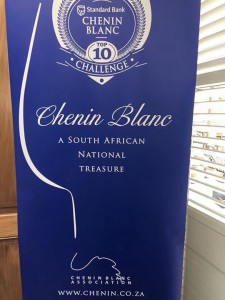 Yesterday the second Standard Bank Chenin Blanc Top 10 Challenge was held at the Cape Grace, with the Top 10 Chenin Blancs selected out of a total of 145 wines entered. The banner in the pre-lunch venue summarized the stature of Chenin Blanc, with the  pay-off line ‘A South African National Treasure‘!

Canapés of pastry cases with salmon and hollandaise sauce were served with Sparklehorse Chenin Blanc MCC made by Ken Forrester Wines. Ken Forrester is the Chairman of the Chenin Blanc Association, and looked dapper in his Spring-like bowtie, which he ties himself, and demonstrated to us. 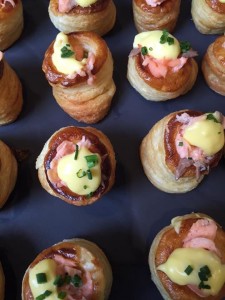 We were welcomed by Ken, who shared that five of the Top 10 winners were in the Top 10 last year too, demonstrating the consistency of the 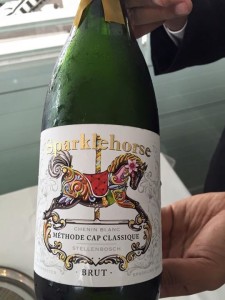 top performers, despite the judging panel having some changes relative to last year. KWV, Perdeberg, Simonsig, Spier, and Stellenrust made an appearance in the Top 10 list in both years. 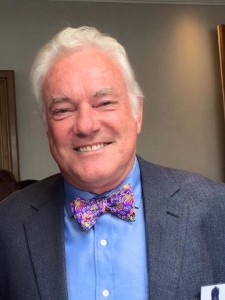 Plessis said that they chose to sponsor the Chenin Blanc Top 10 Challenge since last year, as they sponsor Arts and Culture. As winemaking and food and wine pairing are an art, there is synergy! He provided figures about Chenin Blanc in our country, saying that it makes up 20% of vine plantings, employs 300000 staff, and is showing a 7% growth in sales. Chenin Blanc is the most exciting wine in the New World, he said. He added that his bank has increased its sponsorship of an increasing number of wine-related events, including the new Wijnskool in Hermanus, the Cheese Festival, the Du Toitskloof Wine Writer of the Year competition, the Diners Club Winelist Awards, the Diners Club Platters Guide, the Diners Club Winemaker of the Year Awards, and more. 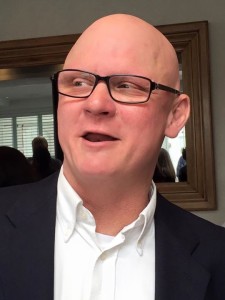 Christian Eedes (left) said it was ‘daunting‘ for him and his panel to judge 145 wines. A total of 37 of the wines made it into a second round, of which the best ten Chenin Blancs were chosen. Old vine Chenin Blanc is a huge asset for our wine industry, he said, none of the vines of the Top 10 wines being younger than 20 years. He asked if it was not time to demarcate wines made from our older vines as is done in France. The Top 10 winners come from a spread of regions, including Stellenbosch, Swartland, Piekenierskloof, Durbanville, and Paarl.  The wines tasted spanned two spectrums: elegant, clean and fresh; and rich, powerful, and ‘funky’! The Top 10 wines were rich and ripe, their concentration coming from the older vines.

The judges spoke about their experience in evaluating the top wines: Christian Eedes said that the quality has improved slightly relative to last year; Jamie Goode said that ‘Chenin Blanc is South Africa’s calling card‘! There is a range of styles, flavors and textures in the Top 10 wines. Francois Rautenbach said that he senses the confidence of the winemakers. Jaap-Henk said the wines reflect ‘sunshine from Africa‘. Cathy van Zyl praised the well-run competition and its judging. 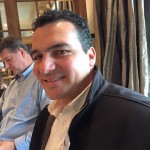 *   DeMorgenzon Reserve 2014 (R210). From a vineyard on the Stellenbosch property planted in 1972. I sat next to winemaker Carl van der Merwe, and he told me that they have 7 ha under Chenin Blanc, and they would plant more if they had more land.

*   Perdeberg Winery The Dry Land Collection Barrel Fermented 2014 (R77). From two vineyards in the Agter-Paarl, one 26 years old, and the other 32 years old. 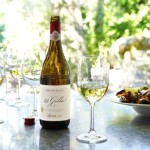 Spier 21 Gables 2014 (R139). From a Durbanville vineyard, 40 years plus in age.   The wine farm was awarded R20,000, which will be donated to the Foundation for Alcohol Related Research (FARR), an NGO which conducts training, education, research, and support to projects dealing with Foetal Alcohol Spectrum Disorders (FASD) across South Africa 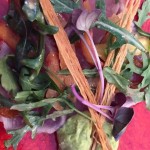 Signal Chef Malika van Reenen and her team prepared a five-course lunch, each course paired with two of the winning Chenin Blancs. The first starter was pickled yellow tail, apricot chutney, avocado lime mousse, and crispy kataifi. This was paired with KWV Cathedral Cellar 2014, and 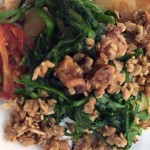 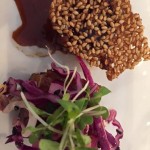 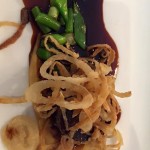 crisps. The dish was paired with Aeternitas Wines 2010 and Stellenrust 49 Barrel Fermented 2013. 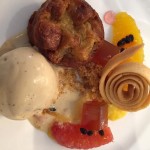 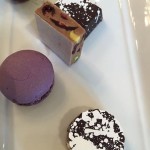 Ken Forrester was saluted by Western Cape Head of Standard Bank Johan van Wyk for having done so much for Chenin Blanc in our country, and for having become synonymous with the variety. Each of the Top 10 winners received R20000 from Standard Bank, which will go to development projects benefiting the community.

Disclosure: We received a bottle of one of the Top 10 Chenin Blancs, my media pack containing the Aeternitas Blanc Chenin Blanc 2010.