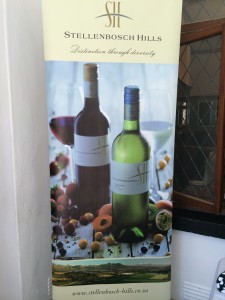 I haven’t been to La Mouette in years, so accepted the invitation from Waterford Communications to attend the launch of the latest vintages of Stellenbosch Hills, and a spoiling 7-course Tasting Menu, a relaxed event ending off a very busy functions week.

We were met outside in the courtyard, and offered  the 2014 vintage of Stellenbosch Hills’ Polkadraai Pinot Noir Sparkling Rosé.  Polkadraai is one of the Stellenbosch Hills ranges, and uses polka dots for its neck wrapper design, in different colours. The design lifts 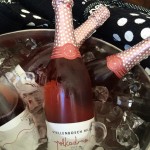 the image of the brand.  With the sparkling wine we were served the moreish La Mouette feta and truffle and Gruyére croquettes, as well as chicken satay.  Cellarmaster PG Slabbert welcomed us once we had moved into one of the restaurant rooms, sitting at three long tables, and shared that Stellenbosch Hills is a co-operative which has been in existence for 69 years.  A big celebration for the 70th anniversary is planned.  The 8000 tons of grapes harvested come from 16 member 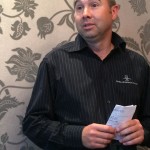 farms, the harvest volume having grown by 20% relative to last year. Sauvignon Blanc is the dominant white varietal, and Shiraz and Cabernet Sauvignon the dominant red varietals. The farms are 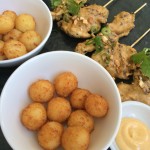 Vlaeberg, Lynedoch, Stellenbosch Kloof, and Vlottenburg in Stellenbosch.   Red wine maker Juan Slabbert has been at Stellenbosch Hills for five years, and was previously at Nuy winery.  He sat at our table. He told us that they sell out every vintage, 85% going to Distell as bulk wines, 10% is exported to Holland, and 5% is bottled and sold locally.

The menu was professionally presented on silver board, carrying the branding of the restaurant as well as that of Stellenbosch Hills.  Each of the seven courses was listed with a matching Stellenbosch Hills wine.  The grey serviettes matched the silver grey wallpaper.  Our waiter Trevor brought the bread selection, being yoghurt and cheese bread, crispy bite size vetkoek (the second vetkoek in two days, having been offered it at Jardine at Jordan the day before as well), and cheese and onion slices. A separate platter contained a mushroom paté, butter, and garlic aioli.  Trevor struggled to attract our attention, to explain the menu to us, and to allow us to choose one of two alternatives for two of the courses.

The Polkadraai Pinot Noir Sparkling Rosé 2014 is a light easy drinking wine, sweet at 55.8 g/l residual sugar, and is designed 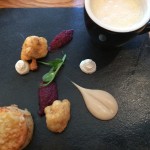 for ‘the ladies’ to enjoy, PG explained. Grapes come from Vlottenburg.  It costs R55, and is particularly popular for weddings.  Our first course was a salty roasted cauliflower soup, which was served in a cup on a platter with Gruyére cheese scones, truffle Chantilly and red onion jam, which was paired with Stellenbosch Hills Polkadraai Chenin Blanc/Sauvignon Blanc 2014 blend. The grapes come from the Polkadraai area, has a residual sugar of 3,5 g/l, and is a 70% Chenin Blanc and 30% Sauvignon Blanc blend. It costs R32,50.

Course number two was a celery ‘panacotta‘, attractively presented on hazelnut crumble, and served with 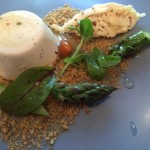 grilled asparagus, and an apple and celeriac remoulade. It also was very salty. This dish was paired with Stellenbosch Hills Sauvignon Blanc 2014.   The style of the Sauvignon Blanc is to emphasise its tropical fruit flavours, and it has a higher acidity.  It costs R42. 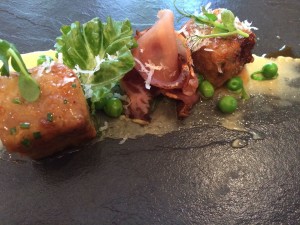 The third course was one of two choices, and I chose ‘Peas, ham & eggs’, which promised more in its description than was presented, the egg presented as an egg yolk emulsion smear.  It was a mix of good glazed pork belly, lomo (dry-cured ham), peas, and Parmesan, which was paired with Stellenbosch Hills Merlot 2011.  PG said that Merlot is a fussy varietal, ‘which one has to treat like a woman‘ during fermentation!  The alcohol level is 14,5%.  The alternate choice was salt & pepper calamari served with roasted corn, purée, pickled cucumber, caramelized onion ketchup, and a chili dressing, which was paired with Stellenbosch Hills Chenin Blanc 2014, made from grapes which come 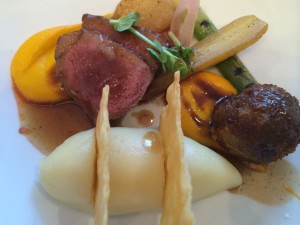 The fourth course was also a choice one, being the main course.  I selected the deconstructed Springbok pie, which was served with Bitterballen, Springbok medallions, Spring baby vegetables, butternut purée, smoked mash, and crispy pastry.  This course was paired with Stellenbosch Hills Pinotage 2012,  made from grapes which were hand-picked from bushvines from Vlottenburg, and matured for 14 months in French and American oak.   The alcohol level is 14,5%. It costs R49. The second option for this course was Franschhoek trout tartare, cauliflower couscous, quinoa, crispy calabash, pickled pumpkin seeds, and spiced chicken jus, which was paired with 1707 Reserve White 2013, a 70% Chardonnay, 20% 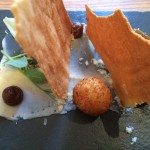 The fifth course was more Gruyére cheese, called ‘Textures of Gruyére‘, which was served with caramelized onions, pickled onions, and date purée, and was paired with Stellenbosch Hills Shiraz 2011.  The wine was matured in French and new American oak, and costs R54.   The dessert was Eton Mess, with shards of 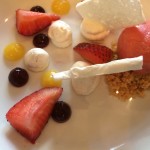 meringue, lemon curd, strawberries, vanilla cream, cassis gel, and strawberry sorbet, a fresh and colourful end to the meal, which was paired with Stellenbosch Hills Muscat de Hambourg 2012, made from a table grape in a Jerepico style.  Stellenbosch Hills is the only producer of this type of fortified wine. It costs R48,50. 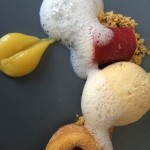 At this stage, nearing 15h00, many of the guests had left, so most of us did not taste the final course, named ‘Memories of sweets by the seaside‘.  I was able to photograph the dish before leaving the restaurant, it consisting of a cinnamon ring doughnut, almond crumble, salted caramel ice cream, and vanilla Bavoir, topped with lime leaf foam.

Time flew in the three hours at La Mouette.  The service staff was better trained than we had experienced at Jordan the day before, and our waiter tried hard to describe each dish served to our table, but the more wines that were tasted, the harder it was to hear him.   It was disappointing to not see Chef Henry Vigar, and the charming Mari has not yet returned from maternity leave.  Manager Caroline came to check on us regularly, kept my water jug topped up, and was helpful in providing details of the last course which most of us did not get to eat, and was not detailed on the menu.   The initial courses were too salty, and the repetition of ingredients (the Gruyére in particular) could have been prevented.