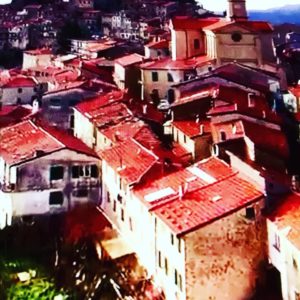 The seventh episode of the JAN TV series on viaTV and Showmax this week was once again set mainly in Apricale in Italy, and focused largely on hunting wild boar in the area.

Seeing the episode this week, set in the village in which I wrote the almost completed The Book, but also having spent six hours in the company of Chef Jan-Hendrik van der Westhuizen and style icon Jackie Burger at Salon58 number 11 on Saturday, made seeing the episode even more special.

Chef Jan-Hendrik introduces the wild boar hunting, saying that it takes place in winter on Wednesdays and Fridays. A group of about 25 locals participate, wearing orange colored jackets. They share the spoils of their hunt, making sausage, charcuterie, steak, and chips. Dogs accompany the hunters, identifying the location of the wild boar. The area of hunting differs each time. The wild boar can weigh between 60 and 120 kg, and are a bit of a nuisance (‘onkruid’), Chef Jan-Hendrik implied, causing damage to the fauna of the area. Hunting appears to happen at night. Hunters are kitted out with walkie-talkies and ear pieces, the hunting bring strictly controlled. The hunters eat the wild boar liver fresh after the hunt.

Chef Jan-Hendrik said that it can be intimidating to work with such an expensive ingredient like meat, especially as a young boy, when he observed his father taking the carcasses, and cutting them up with an electric saw, while his mother packed the meat slices into neat packets. Chef Jan-Hendrik’s father hunts, and their lounge is full of trophies. It is something which he does not do, it being scary to him. Hunting has become a sensitive topic, and many people do not know where meat comes from. All 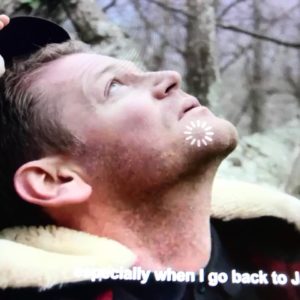 they want is to buy beautifully packaged meat.

Whilst walking in wild terrain with a local, Chef Jan-Hendtik waxes lyrical about the beauty of the area and countryside, raving about the white light, and beauty of the leafless branches against the sky, and the texture of 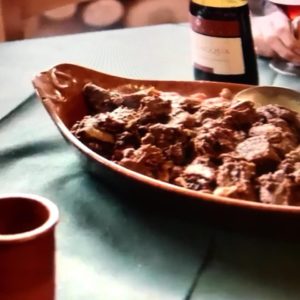 nature he sees around him, giving him inspiration,

Not being directly part of the hunt, Chef Jan-Hendrik goes to a neighboring village to eat wild boar ‘bredie’ at Jolanda restaurant, 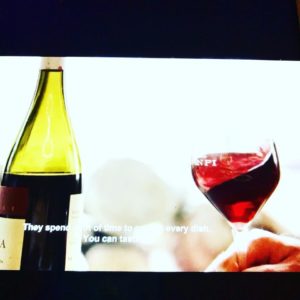 in Bajardo, it would appear.

Chef Jan-Hendrik spoke about Italians having a passion for and pride in food, presenting it unpretentiously, and being very hospitable. The chef sat in a roofless Church, which had been destroyed by an earthquake in 1878, killing hundreds of churchgoers, a very moving thought to him.

He addresses the camera about creating a MARIA restaurant, it being the name of his sister, mother, and grandmother. I was lucky to see it come to fruition when I ate at JAN in September. 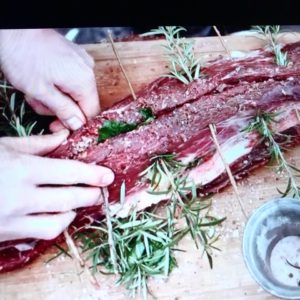 Chef Jan-Hendrik returns to Apricale, and prepares a fillet roll filled with capers, anchovies, and pickled lemons. He used olive and rosemary branches to hold the fillet roll together, cooking it on a grid on the coals of a fire in the Apricale village square, a perpetual fire which is lit on 24 December and is kept burning until 14 February, a lovely tradition kept alive by the 600 locals. The chef shares that he likes to eat his meat rare. As it was winter when the series was filmed, the chef is briefly seen with a blanket around him, at night, it being so cold. Chef Jan-Hendrik talks about the village executioner, who dealt with locals who misbehaved, and their heads were posted on wooden stumps above his window, a morbid reference. 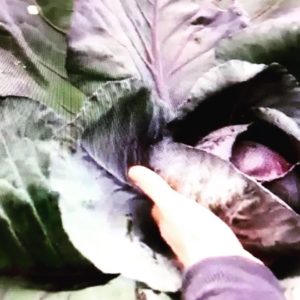 in the imperfection of the fruit and other produce, perfect produce not being trustworthy. Locals cook by the season, and its produce. He would like to spend the next 30 years educating people to cook more seasonally. At the market we see red cabbage, honeycomb, olives, olive oil, spices, cheeses, and charcuterie.

The chef returns to the kitchen in Apricale, saying that he is inspired by how others see things. He likes to be in the front of house of JAN Restaurant, knowing how special it is for their guests. At the age of 35 years he says that 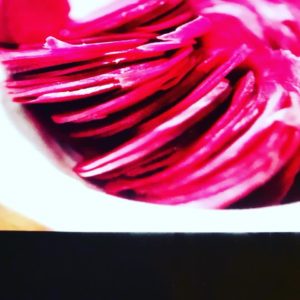 making mistakes is the best thing that one can experience, as one learns so much through it. He advises viewers to not let anything block their goals, and that one should view criticism as a 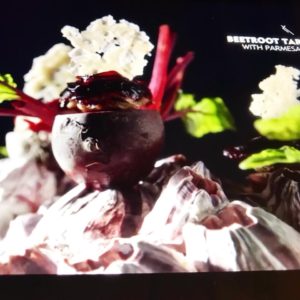 compliment! One should stay determined, he advised.

The episode is concluded by beautiful Beetroot Tarte Tatin made by Chef Jan-Hendrik, prepared for all those who are different! Grazie Chef!