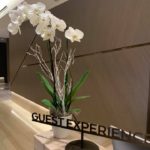 The Sweet Service Award goes to 5-star VP Plaza España in Madrid, and its Guest Experience Manager Samuel Vela, for his kindness to me, despite not staying at the hotel. On my arrival in Madrid, I mistakenly tried to check in at the hotel, having been dropped off outside its door by my Uber driver. Samuel showed me where the hotel that had been booked for me by an airport travel agency was. A day later I needed a beer, due to the heatwave in the city, and as my hotel did not offer this service, I went to the VP Plaza España. Samuel suggested I go up to their Gynkgo SkyBar on the 12th floor, with a lovely view of a lit-up Madrid, and of a thunderstorm, with good service. 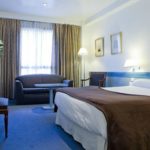 The Sour Service Award goes to Espahotel Plaza De España in Madrid, a terribly dated 3 star hotel, with a dreadful night manager Manuel Gonzalo Alarcones, who rudely refused to help me set the air conditioner, to get it to work, claiming that he could not leave Reception. The rooms are more like an apartment, with a kitchenette, but nothing about them felt homely or nice to be in. On the first night I was blasted with ice cold air, whereas on the second night the aircon did not work at all, someone setting it at 27C! At booking I was not told that the hotel is undergoing renovations, with terrible banging throughout the afternoon. When I returned from the Gynkgo SkyBar, the Hotel door was locked, and I had to bang on it madly to get inside! The Day Manager David Velasco was a welcome contrast, in his friendliness, and suggesting what I should see in the city. My room did not have the flowers, as per this pic via Google!