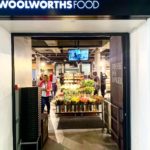 The Sweet Service Award goes to Woolworths, for opening a long-awaited branch of its FOOD store in Camps Bay yesterday. The retailer handed out rusks at the traffic light, to attract attention to the store opening, and offered early bird shoppers R50 discount vouchers. The Manager of the store Lee Worship and the Foods Manager Gary Arendse were friendly in welcoming us to their new store. We as Camps Bat residents are delighted to have the store in walking distance.