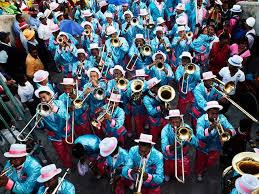 I was surprised to receive so many hits for an Open Letter written on my Blog in 2014 to the Taj Cape Town in the past few days. It was only when I saw the report by News24 about the Taj Cape Town trying to control the Night March of the Cape Minstrels past the hotel on Wale Street that I could make the connection, given that our Open Letter is on the first page of Google for the hotel and its GM Michael Pownall!

The report reflects that the Taj Cape Town GM approached the City of Cape Town Mayoral Committee Member for Tourism, Events, and Economic Development Councillor Garreth Bloor (not the organizer of the event!) by letter, requesting that the Cape Minstrels march past the hotel on the corner of Wale and Adderley Streets without playing any music, so that his hotel guests can sleep in peace: ‘They should just march past and into Adderley St without music – This really is critical as I have a 100% full Hotel with very high-rate paying visitors, whom (sic) will SERIOUSLY complain if they cannot sleep due to this event. We have had some co-operation in the past, but it has never been ideal… bad enough that we have to deal with the road closures and access problems this brings. Do let me know please’.

Choir Board President Shafick April said that they had followed the directives of the event permit, and that the hotel is not a holy shrine nor mosque requiring special treatment. No other hotel nor guest house has complained. The Night March has been a tradition in the city centre for many years before the Taj Cape Town opened five years ago!

When the story reached the press, Taj Cape Town GM Pownall had to do an about-turn and apologise for his request regarding the playing of music outside the hotel! ‘I recognize in retrospect that my request to Mayoral Committee Member for Tourism, Events and Economic Development, Garreth Bloor, was insensitive and would like to retract it’, he announced after the event! He added that the hotel ‘had embraced the heritage of Cape Town since the hotel opened five years ago and that they respected the integral part that the Cape Minstrels and its parades played in Cape Town culture’!  He also said that they ‘always encouraged their guests to watch the Parades and share the cultural significance of this Cape Town institution.  In-fact we share with our guests copies of a book, Coon Carnival, about the history of the Minstrels and the parades‘!

The Daily Vox published the following communication between the Taj Cape Town and City of Cape Town: Nazier Paulsen is a MP for the EFF!

‘31 December 2015, Cape Town: Michael Pownall, General Manager of the Taj Hotel, Cape Town said today that he wholeheartedly apologises for the request he made that the Cape Minstrels consider sleeping hotel guests by not playing music loudly in front of the hotel during its overnight Parade (held last night 30th December).

I recognise in retrospect that my request to Mayoral Committee Member for Tourism, Events and Economic Development, Gareth Bloor, was insensitive and would like to retract it,” said Pownall.

The management of the Taj Cape Town has since opening, warmly embraced  the rich heritage of Cape Town and respects the integral part that the Cape Minstrels and its parades play in Cape Town culture.

We always encourage our guests to watch the Parades and share the cultural significance of this Cape Town institution, in-fact we share with our guests copies of a book, Coon Carnival, about the history of the Minstrels and the parades.”

It has become a hotel tradition to host a minstrel choir every New Year’s Eve to perform to our guests in the hotel lobby and our guests thoroughly enjoy this experience.”

We do inform guests when they reserve rooms over the period of the parade that the festivities are very lively and carry on until the early morning hours.

We would like to collaborate with the City of Cape Town and the organisers of the Cape Minstrel Parade to ensure that the event is equally enjoyed by Capetonions (sic) and visitors to the city’.

Councillor Bloor responded to an enquiry as follows:

‘It is definitely not a case of the municipality being dictated to. The City has to try and balance the needs of a number of stakeholders in a diverse city.

The City issued the Event Organiser with an event permit.

The request from the hotel (to the City), was passed onto the Event Organiser. Any decision they take is at their sole discretion, bearing in mind they were issued with a noise exemption certificate.

Any decision to reduce noise is entirely in their hands as the Cape Malay Choir Board. Final power was given to this event organisers by the City and they have the right to make decisions at their event, for which we provide the required support.

We can only pass requests we receive onto the EO and they will determine what is possible and preferable as the organisers.

Realistically, trying to silence about 15 000 participants, is not possible, more especially since this event is an intrinsic part of the Cape Malay culture – the music/musical instruments are an integral part of this celebration. This is a unique event that forms an integral part of the cultural fabric of Cape Town, that the City supports annually.

For future such events, we will impress upon hotels to advise guests timeously, of the nature of these iconic celebrations taking place during their stay.

The cultural diversity of our magnificent city, is what sets us apart globally.

We are an inclusive city and our rich cultural heritage is extremely important and we call upon all visitors to get caught up in the spirit of these celebrations’.

Taj Cape Town has a serious and embarrassing image problem that its apology will not fix!

POSTSCRIPT 3/1: It is not a surprise that the ANC has entered into the debate, demanding that Taj Cape Town apologise directly to the Minstrels and to the Cape Malay Choir!