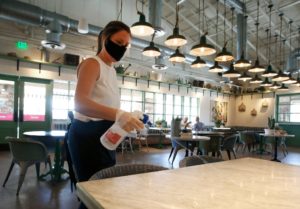 A survey conducted amongst restaurants by the international hospitality Esus-Group, has found that many restaurants reopened for Lockdown Sit-Down Service from 30 June, as the date coincided with the end date of the Government paying employees UIF/TERS, restaurants therefore being forced to reopen to be able to pay their staff. Sadly this may lead to the death of the restaurant industry, as they are using valuable cash to run a business which now has a turnover of 20% of that of last winter, the study shows!

The Esus-Group is a hospitality group operating in Asia and South Africa, locally owning restaurants The 41 in Camps Bay and The Korner in the Cape Town city centre. It is owned by French businessmen Nicolas Da Costa and Giles Blanc.

The survey was conducted by Digitize-it, a division of the Esus-Group, amongst 221 restaurants in South Africa, between 5 to 10 July, prior to the devastating last Speech by the President, in which he announced on 12 July the curfew and ban on all alcohol sales.

The President’s Speech: Level 3 retained, Alcohol Sales ban and Curfew announced as of Monday 13 July 2020, a further blow for the Restaurant industry!

Its survey findings were as follows:

#   15% of the restaurants and coffee shops which reopened plan to close again by the end of this month, while a further 53% are undecided whether they will trade in August. One third of the sample said that they will remain open.

#   73% of the restaurants and coffee shops which reopened from 30 June said their financial situation is becoming worse, and is particularly ‘dire’ for the fine-dining restaurants. Only 26% said that their businesses were able to break even by reopening.

Commenting on the findings, Giles Blanc said: ‘Between 50 to 70% of the profit in a restaurant is coming from the bar in restaurants. Allowing the industry to trade without alcohol is causing the financial situation of thousands of businesses to regress, putting at risk millions of direct and indirect jobs in the country’.

Blanc summarised the deplorable Restaurant industry situation as follows in his introductory note to the Survey results: ‘In an ideal world, this document should bring to restaurant owners’ attention that being open now is actually making their financial situation worse. So the best thing would be to remain CLOSED to show to the government how absurd that situation is and that they still must help us, by keeping TERS active still a couple of months. The situation is even worse now with the curfew which actually does not allow any dinner trade…’

POSTSCRIPT 21/7:  Wonderful news for the restaurant industry is that the Government announced today that it would extend UIF/TERS payments to employees by six weeks until mid-August.