We are extremely proud to have you living in your newly adopted home city Cape Town, and that you are such a fantastic tourism ambassador for our country in general, and for Cape Town in particular.  You put Cape Town on the world tourist map with your article earlier this year in the New York Times about Cape Town being the number one  ’52 places to go in 2014′, the best free publicity our city has ever had.

I was therefore shocked to see your article about ‘Top Chefs in Cape Town’ in Travel + Leisure, and the choices you made in selecting what you have listed as the top five chefs in Cape Town: Luke Dale-Roberts of The Test Kitchen, Peter Tempelhoff of The Greenhouse, Reuben Robertsons Riffel of Reuben’s x 4 (in Franschhoek, Cape Town, Robertson, and Paternoster) plus Racine, Bruce Robertson of The Flagship, and Franck Dangereux of The Food Barn, in that order. You did not define your guidelines for selecting the five chefs, nor did you appear to use the same criteria in selecting the chefs that are on your list – the justification for inclusion appears more anecdotal and random.  Equally, I am surprised about the chefs you excluded from the list!

You seem to praise Chef Franck for his ‘foreign pedigree, but why single him out when Chefs Luke and Peter also have foreign roots?  Does that make them better chefs?  All of the chefs on your list have worked overseas, so they deserve equal mention in this regard.  You ‘warn’ Travel + Leisure readers to ‘watch out for these five Cape Town chefs and memorize their names now – they’re poised to break through to the global stage any day now‘!

Let me comment on each of your Top Chef choices:

1.  Luke Dale-Roberts:   Chef Luke has already made number 48 on the 2014 World’s 50 Best Restaurant list, and was at number 12 when he was the Executive Chef at La Colombe in 2010, so he has long achieved what you predict in respect of breaking ‘through to the global stage‘.  In 2013 Chef Luke received the honour of ‘The One to Watch‘ at the same restaurant awards, so he has more than proven himself on the world stage.  Be careful of throwing The Pot Luck Club into the same pot – this is a completely different eatery, and will make the Eat Out Top 20 Restaurant shortlist, but it is not in the same league as The Test Kitchen.

2.  Peter Tempelhoff:  Chef Peter has received international recognition by being one of only two (with Chef Margot Janse) Relais & Châteaux Grands Chefs (note the correct name of the accolade) in our country, and 160 worldwide.  You cannot bring Mondiall into this top 5 listing, as Chef Peter has barely cooked there, the restaurant having been looked after by head chef Chef Oliver Cattermole since its opening in December last year until his departure last month.  There is no comparison between the standard of cuisine at The Greenhouse and Mondiall!

3   Reuben Riffel:  This inclusion and the ranking is completely wrong Sarah, Riffel having last made the Eat Out Top 10 Restaurant Awards in 2006 for his Franschhoek restaurant, and has not ever made the Top 10 nor Top 20 shortlist for his One&Only Cape Town Reuben’s restaurant, of which the kitchen is run by its Senior Head Chef Roberto de Carvalho (previously owning Portuguese restaurant Roberto’s), Chef Vicky Stott having resigned.   When Riffel took over the space from Gordon Ramsay, he was forced to be at the hotel restaurant three times a week.  With his MasterChef SA Season 3 judging, Eat Out Top 10 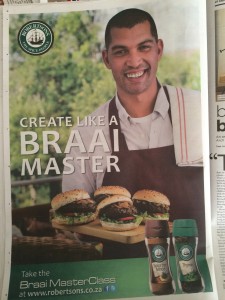 Restaurant judging (what a joke!), five restaurants to manage, Pop-Up and Pop-In presence everywhere except at his own restaurants, writing cookbooks, travelling through Africa, guest chef here and guest chef there (e.g. his disastrous ‘Gala Dinner’ Braai for the official opening of Cape Town hosting the World Design Capital 2014 earlier this year), Golf Day hosting, and more, he has no time to be in his own restaurant kitchens!  His Manager at the One & Only Cape Town told me that Riffel is at the Cape Town restaurant once a week at most, given that ‘there are so many things that he is doing‘ – a classic! But worst of all is Riffel’s ill-advised role as spokesperson for a common-or-garden range of Robertsons herbs and spices (now in a full page ad in the Sunday Times), exactly when the trend is to freshly grown herbs and vegetables. This has cost Riffel his reputation as a chef to be taken seriously.  His chef colleagues laugh at him behind his back!  To write that you ‘can catch him in action at his restaurant at the One&Only’ Cape Town is downright misleading to your readers!  Oh, and your description of him as one Cape Town’s ‘best loved toques’ is funny, as he does not come near wearing a chef’s hat, if that’s what you meant!

4.  Bruce Robertson:  Recently having opened The Flagship in unfashionable  Simonstown which comes with a whale of a view over False Bay, Chef Bruce has stepped up his sustainable seafood-dominant cuisine, opening his guest house restaurant to guests, to food lovers and to friends, having previously operated in Scarborough.  He is the barefoot chef, in casual jeans and white shirt, and last graced our Eat Out Top 10 restaurant lists five years ago.  Can he be compared with the rest of the chefs on the list?  Probably not, as his laid-back style is not comparable to the other chefs, and he probably isn’t chasing awards anyway, being happy in his space.

5.  Franck Dangereux:  Chef Franck was head chef at La Colombe, and was rated seriously as a top chef at that time about ten years ago. He left the top restaurant to open The Food Barn in alternative Noordhoek, very far removed from Cape Town’s city centre and Atlantic Seaboard food lovers, therefore catering to a Southern Suburbs and Peninsula clientele.

I like that you wrote that ‘Cape Town might be the world’s most underrated foodie hub.  The city’s fresh produce, world-class wines, and diversity of cultural influences all come together to make magic on the plate, and a weak state of our currency these days means it might have the best value for money anywhere on the planet.  Leading the charge to make Cape Town a gourmet hot spot are a host of inventive, über-creative chefs who dabble in dishes featuring local ingredients with unique twists’.

The biggest weakness in your selection is your omission of the following Cape Town based Chefs:  Liam Tomlin may only have recently returned to his cooking pots, but he is doing a superb job at Chef’s Warehouse.  He is our city’s most experienced chef, and has lived here for ten years already, a doyen of Cape Town chefs.  What a shame to have missed him.  Chef Scot Kirton is a protégé of Chef Luke, having jointly achieved our country’s highest ever ranking (at 12th in 2010) on the World’s 50 Best Restaurants list. Despite La Colombe only reopening in its new venue in October, Chef Scot is a serious omission. Chef PJ Vadas may be in-between restaurants, looking for a venue for his new The Hog House restaurant and brewery, now operating from Cape Town, having made the Eat Out Top 10 Restaurant list for Camphors at Vergelegen last year.  Why did you exclude him?  Last, but not least, we have Andres Condé in our city now, who has worked at elBulli (long the number 1 restaurant in the world) and at the Michelin star Tickets, both in Spain, now working for the Harbour House Group. He  is a huge new asset for Cape Town’s cuisine.

Your focus is too narrow by restricting the list to Cape Town – Stellenbosch is our Gourmet Capital, and to omit Chefs George Jardine at Jardine at Jordan, Richard Carstens at Tokara, Christiaan Campbell of Delaire Graff, Bertus Basson of Overture,  John Shuttleworth of Rust en Vrede (and let me squeeze in Gregory Czarneki of Waterkloof in Somerset West) is a huge oversight, Cape Town and the Winelands (including Franschhoek’s  Chefs Margot Janse, Chris Erasmus, Darren Badenhorst, and Arno Janse van Rensburg) jointly representing 80% of the Eat Out Top 10 Restaurant list.   Only Chefs Luke and Peter were on the 2014 Eat Out Top 10 Restaurant list, so it surprises me that you had to stretch the list to add the other three chefs.

I can imagine that Chefs Luke, Peter, Bruce, and Franck must be fuming that you have thrown them into the same pot as Riffel, who is an embarrassment to the local food scene!   Are you not patronising Riffel by placing him on a platform he is not entitled to, which should be based on merit only?

I would love to meet you, and introduce you to some of Cape Town’s very special food treasures.

POSTSCRIPT 21/9:  Sarah Khan’s response via Twitter to this Blogpost is disappointing: ‘@WhaleCottage @TravlandLeisure We all have difft palates, difft tastes, entitled to difft opinions. I shared mine, thanks for sharing yours’.