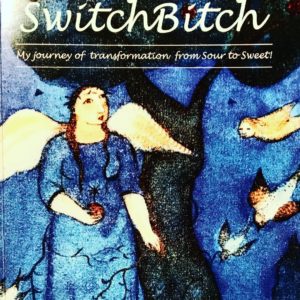 At a private intimate dinner party my first book ‘SwitchBitch: My journey of transformation from Sour to Sweet’ was launched last night, attended by very special friends. It documents my journey of a mainly physical transformation over a twenty month period. 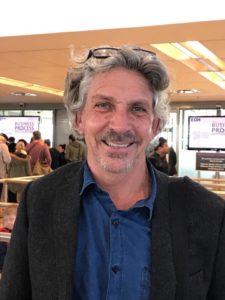 hole of Letting myself go over a twenty year period. A Tinder online dating ‘practice’ run preceded a real-life dating and subsequent relationship with Graham Goble, whom I met at the launch of Nice-based JAN one-star Michelin restaurant owner and Chef Jan-Hendrik’s second Book at the One&Only Cape Town in March last year. An intense friendship became love, and I learnt a lot about myself, Graham being a mirror to me. He taught me about spirituality, and even became my coach for a three-month period, unethical in hindsight, due to our relationship.

At no stage did Graham judge my weight or figure when he met me, so I was under no pressure to lose weight. I was so impressed that he was interested in getting to know the real hidden Chrissy, and that the exterior look did not interest him. I fell in love, and stopped needing to eat to fill the empty hole in my heart. I started losing weight slowly, only realising it when I had a favorite pair of slacks getting looser and looser and had to take it in to my tailor monthly, three times, thinking initially that the elastic of the slacks was poor quality, and was stretching. It finally dawned on me that I was losing weight without any special diet or eating plan, but I did eventually cut out meat and grain-based products. It was time to buy a scale and that became the first indication of a weight loss, and how it was progressing. Once one tastes such a weight loss, one wants to lose more. It helped me to document the weight loss. I had no goal to lose weight ever, nor a specific weight goal. I have lost 45 kg almost effortlessly. The contents of my fridge has changed drastically, with no bread, cake, or meat products, and even the chocolates still in my fridge are barely touched. I eat fresh foods mainly, celery sticks, roast vine tomatoes, radishes, cottage cheese, nuts, and some fruit. I barely know what it feels like to be hungry, only feeling this once when I drank a glass of wine. The stress of editing The Book, and getting it printed in time for the launch, led to a temporary weight gain which I worked off again in time for the launch. The biggest weight loss challenge is being a restaurant reviewer, but I am relaxed in preferring to eat and eat out less, than to have to sit in Restaurants as often as I did in the past!

Since October 2016 I have been dancing at La Parada Constantia Nek every Sunday evening, the dance party  of Cape Town, with DJ René Tanguy and his team playing pop music for us to dance to, up to four hours non-stop. On Friday evenings I dance to the DJ at La Parada Bree Street too. There can be no better ‘gym’ in Cape Town, and the weekly dancing has toned my body, and keeps me fit. I enjoy the friendship of the twenty-somethings who dance and flirt with me on the dance floor. I know most of the music, and I can sing along to it, which astounds many of my fellow dancers. I drive home feeling exhilarated each week, having such a good time. I quickly rediscovered my 18-year old self.

The weight loss and the dancing allowed me to wear dresses again, the first time in thirty years. This has been a most exciting journey, having worn XXL shirts and slacks in the past, and now being able to  wear dresses in size Small. I love wearing them short!  The compliments about my appearance and the dresses I wear motivate me to keep losing more weight, there being no set weight loss goal.

Close friends have encouraged me to experience other transformational forms of rejuvenation too, including Botox with Dr Jemma Simpson, a new hairstyle and colour by Tease Hair & Beauty, blue nail polish at Sorbet, BodyTec exercising and body shaping, dental implants by the Cosmetic & Dental Emporium, and a breast lift by Dr Gruter! My shoe size has reduced, and my blood sugar level has fallen to a near-normal level as a result of my healthier eating.

It was the continued question I was asked as to how I had lost the weight that I realised that I could be an inspiration for not only ladies of my age, but also to young women, who kept telling me on the dance floor that they want to be like me when they grow up. When two friends told me in one day that I should write a book about the transformation journey, I received the message from the Universe to write the book! Graham was delighted, took ownership of the book title, which has since changed, and demanded 51% of the profit, his ego coming to the fore! He even saw a Hollywood movie being made out of the book, and us attending the Oscars together!

I knew that I needed a quiet place in which to write The Book, and traveled to Apricale in Italy in August, writing The Book in twenty days, a chapter a day. I was introduced to the Village by Chef Jan-Hendrik two years ago, it being his favorite escape destination, about 45 minutes from his restaurant in Nice. It was lovely and warm in their Summer, and I would write in the morning and swim and tan in the Apricus Locanda B&B pool in the afternoons, meeting lovely fellow guests. All were interested in The Book. Facebook Friends were very supportive about each of my daily posts about the book writing and the chapter of the day. In returning to Cape Town, life took on its busyness again, and I put the book to one side. I developed a ‘writer’s block’, in not being able to find an apt book title, having too many options to consider, to describe the transformation process. It was special friend Stuart Bailey who suggested the Sour to Sweet wording to describe the transformation journey, saying that this is the best known element of my writing, and on Radio Good Hope as well as on Kfm prior to that. It was Stuart as well who asked me when the book would be published, and that gave me the impetus to set a goal date, being my birthday yesterday, and so the dinner celebrated both my (18th) Birthday as well as the birth of The Book!

A week before leaving for Italy I ended my relationship with Graham, having felt disrespected by him, he allowing himself to be manipulated by his friend Linnhe Elder whom he was visiting in the UK, and who was jealous of my love for and relationship with Graham. The book includes the relationship ending, and through writing it I saw a new side to Graham, a money-begging manipulator himself, who used his looks and charm to extract money and gifts from vulnerable women like myself. Despite my incredible gratitude to him for being the catalyst of my transformation, it was sad to discover how unspiritual and dishonest he really is, especially as he plans to start a spiritual retreat. This is documented in detail in The Book.

My relationship with the restaurant industry, and its egotistical chefs, is documented in The Book too, my best and worst eating experiences detailed. I also include all three my reviews of eating at JAN restaurant over the past three years, as well as the summaries of all the episodes of his recent JAN TV series on viaTV. I also attended his Salon58 hosted with Jackie Burger earlier this month, and have 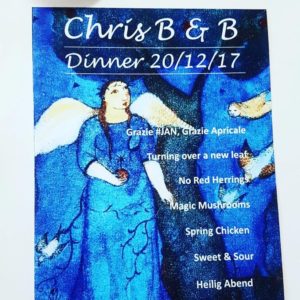 included the write-up of this event too. JAN restaurant is South Africa’s best South African restaurant, in my opinion, no local chef being more Proudly South African than Chef Jan-Hendrik. The second part of The Book is a memoir of my life to date, dedicated to my son Alex.

All the special persons who have influenced my life are acknowledged in the book. A very special thanks goes to all who have helped shape my life, and to the Universe for giving me an opportunity to reinvent myself, and experiencing such happiness, even now without Graham. 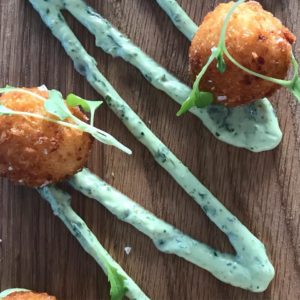 Chef Matt Manning prepared a special meal, the menu items linking to the book and its writing. Chef Matt and I had great fun in devising the menu, and creating titles for the dishes without letting on what would be served. The canapé served with the Le Lude Rosé was truffled Arancini with salsa verde, in honour of Apricale,  where I wrote The Book. The first starter was simply a lettuce leaf and a cherry tomato, and was meant to scare the guests into thinking that they would be served a vegetarian meal, in line with my eating! The guests caught the joke quickly. 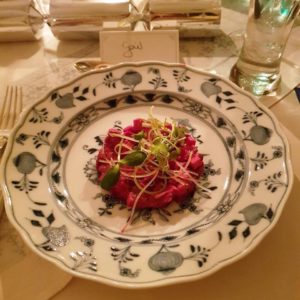 In honour of my parents, we served my mother’s Herringsalat, her annual Christmas Eve dinner treat. 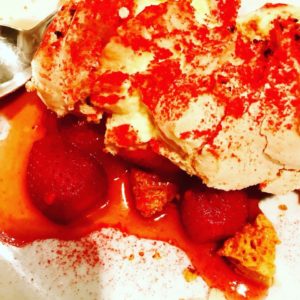 A
lovely mushroom risotto was served, and the double meaning of ‘Magic Mushrooms’ was explained by me, being part of my spiritual journey. The main course ‘Spring Chicken’ referred to my newfound age, and was Petit Poussin served with Brussels sprouts, bacon, and cauliflower purée.  The ‘Sweet & Sour’ dessert was an Eton Mess with meringue, lemon curd, and strawberries, and was the cue to reveal The Book, and its title, which had been kept under wraps. I read my answers to a Media interview I had completed earlier in the day, to summarize what readers can expect to read in The Book. The dinner was concluded with coffee, even a dry cappuccino for me, and 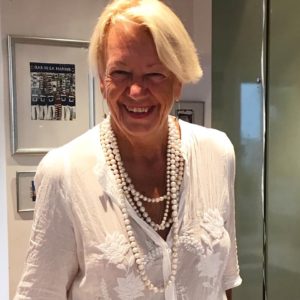 The dinner was interspersed with incredible tributes spoken by very close friends, and I felt very loved throughout the evening.

In January a new print run will be available, and I am Self-publishing the Book initially. The book can be ordered via me at chrisvonulmenstein@gmail.com, at a cost of R200. Half the proceeds will be donated to StreetSmart, a restaurant fundraising charity.

POSTSCRIPT 1/1/18: I have just received the YouTube video compiled by Bryce Shapiro of the Book Launch at my Birthday Dinner on 20 December, with all the speeches, and the introduction to my book.

6 replies on “My Book ‘SwitchBitch: My journey of transformation from Sour to Sweet!’ has been launched!”